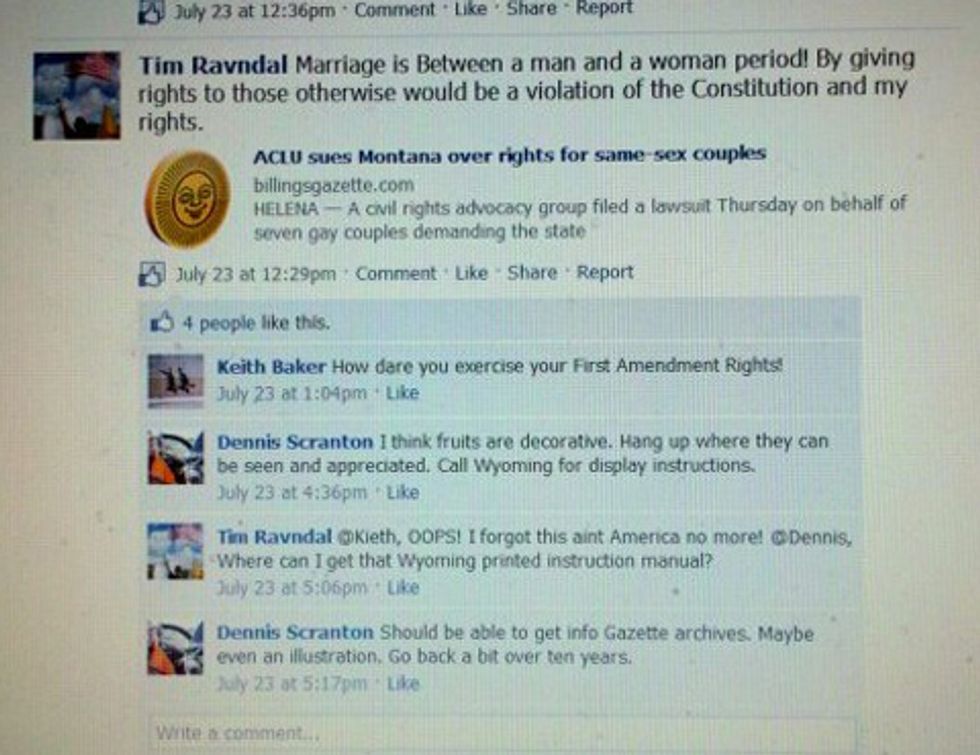 The Big Sky Tea Party Association's board of directors has removed the organization's president for an exchange on his Facebook page that appeared to condone violence against homosexuals.

Board member Roger Nummerdor says Tim Ravndal also has been kicked out of the Montana organization.

The board's vote Sunday came after members learned of the online conversation that began with a comment about an American Civil Liberties Union lawsuit over rights for same-sex couples.

"The comments have since been removed," reports the Independent Record, who obtained a photo of Ravndal’s page with the comments.

Tim Ravndal: “Marriage is between a man and a woman period! By giving rights to those otherwise would be a violation of the constitution and my own rights”

Keith Baker: “How dare you exercise your First Amendment Rights?”

Dennis Scranton: “I think fruits are decorative. Hang up where they can be seen and appreciated. Call Wyoming for display instructions.”

Tim Ravndal: “@Kieth, OOPS I forgot this aint America no more! @Dennis, Where can I get that Wyoming printed instruction manual?”

Dennis Scranton: “Should be able to get info Gazette archives. Maybe even an illustration. Go back a bit over ten years.”

The conversation between Ravndal and another man appears to reference the 1998 death of University of Wyoming student Matthew Shepard, who was beaten and tied to a fence post. Police said Shepard was attacked because he was gay.