CSA Week #11 "Apparently, I Was Really Busy and Distracted" Edition 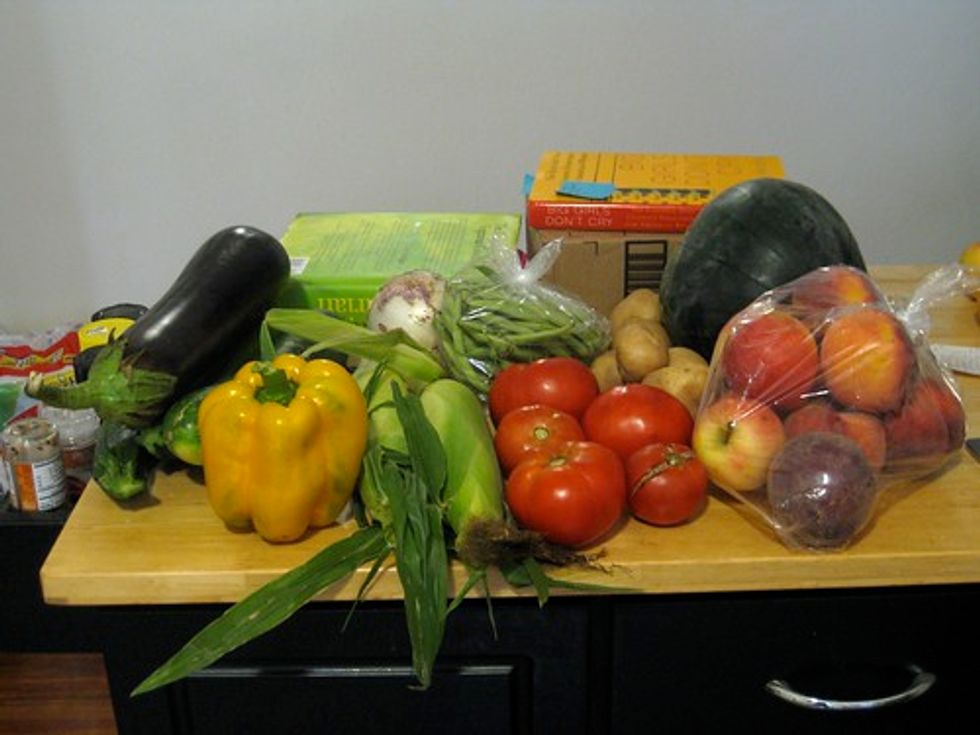 Missed a week of traveling, so I rolled some stuff I made that week into this. Sadly, because of all the chaos, I didn’t keep as good a track in pictures as I wished, but there is some stuff here to look at.

We were having friends over for a not-“Mad Men” double header (“The Sweet Smell of Success” and “The Apartment”), and I was cooking dinner. I thought it wise to get as much work done ahead of time, mostly so that I could get dishes done and not have to sweat it.

1) Made pie crust, using the Bittman recipe. It requires a half hour of sitting as a ball, and then an hour sitting in the pie plate, so that meant that I really had a lot of time to clean and putter. 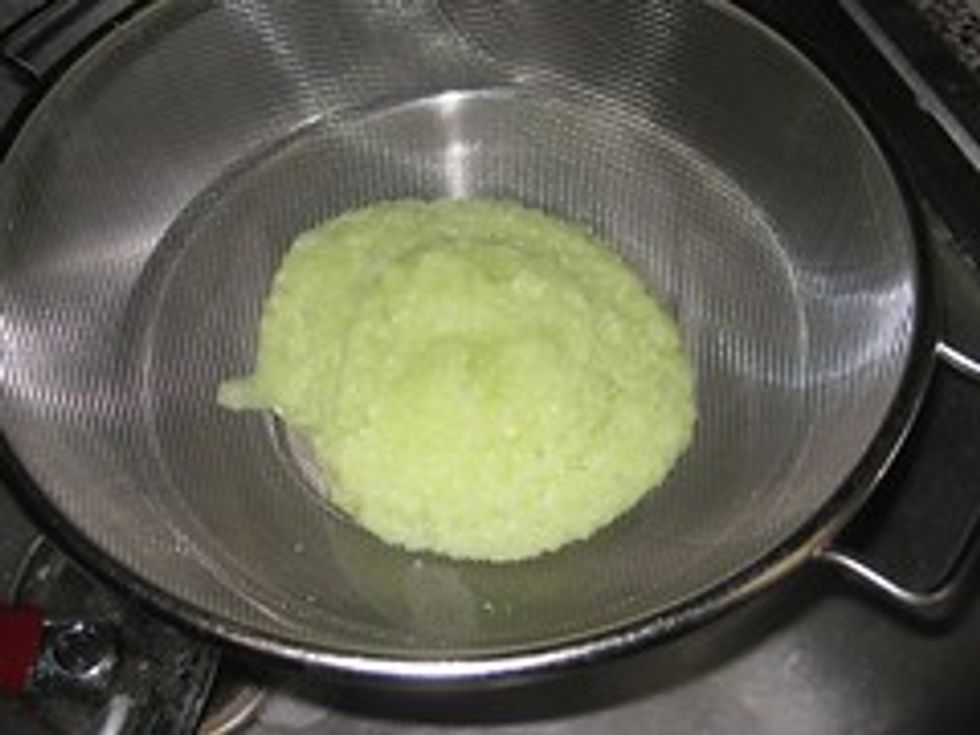 2) Made cucumber juice for the cucumber cocktails by pureeing two cucumbers in the food processor, putting the puree in a strainer, and pressing on it.

3) Peeled, cubed, and salted some eggplant.

4) After the pie crust had gone through its waiting periods, made a peach-berry mix using one of Bitman’s basic recipes. (Basically, just a little sugar on berries and sliced/peeled peaches.) Berries were really discounted at the farmer’s market, so I had a ton of them. 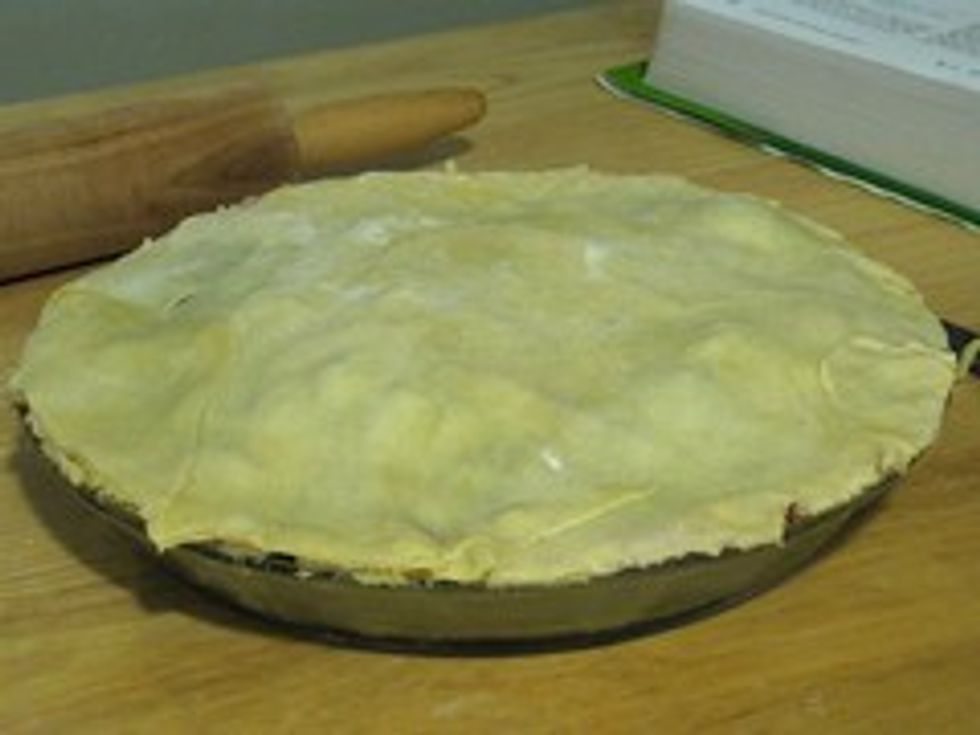 5) Boiled spaghetti. Had some extra time, so cut up what was left of the purslane.

6) Cooked the eggplant with some garlic, olive oil, the purslane, white wine, and of course, salt and pepper. Chopped up three Jersey tomatoes from the farmer’s market, tossed it in, turned off the heat, and added the basil and a sprinkling of breadcrumbs. Poured over the spaghetti, and of course, parmesan cheese.

7) Served with a spinach and tomato salad. Pie for dessert! Sadly, the pie filling wasn’t thick enough, but it was still quite tasty.

8) Used the cucumber juice to make cocktails with it, gin or vodka, lime, a little sugar, and mint. 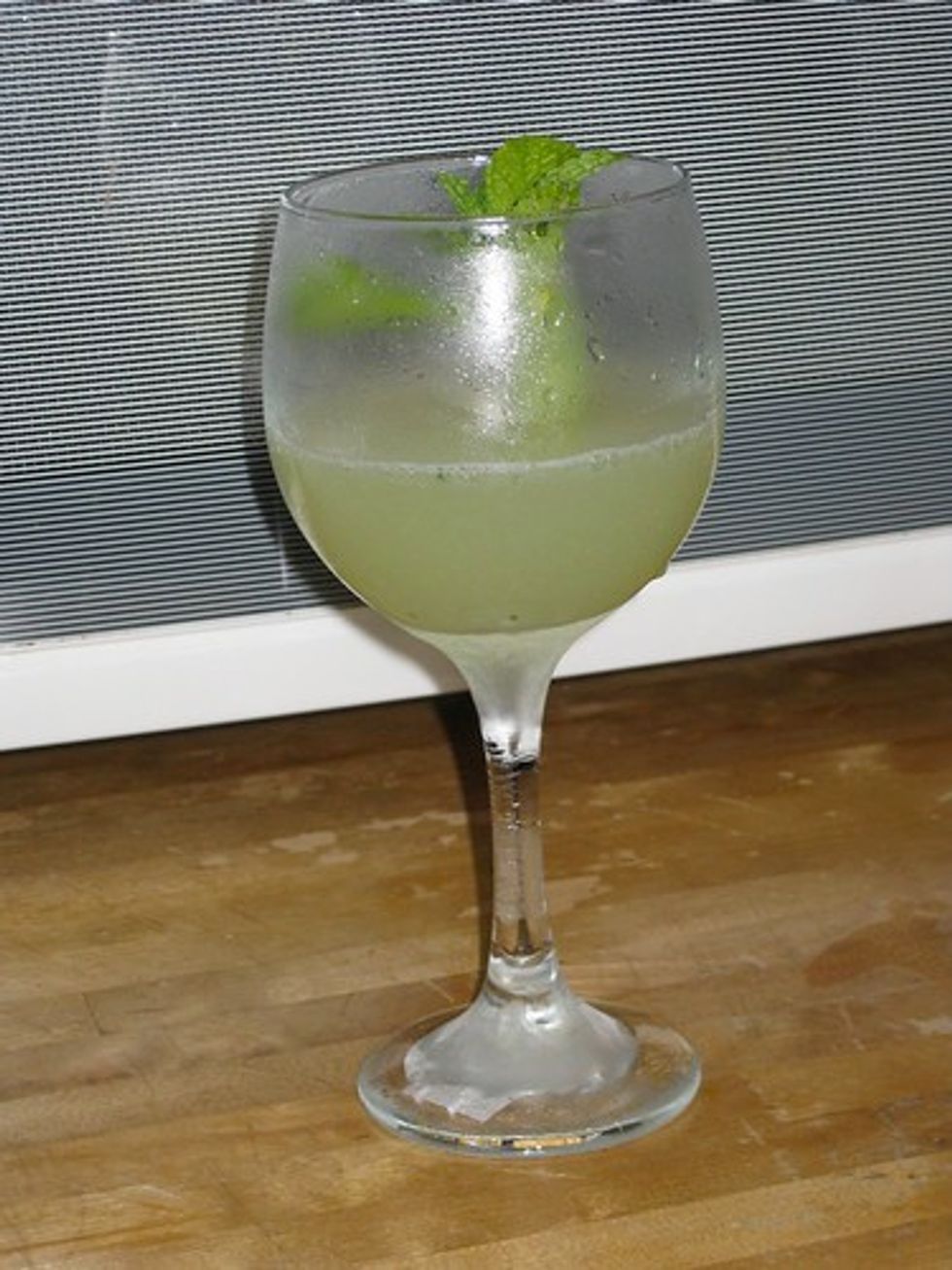 Had a yellow zucchini left over, so I chopped it up and cooked it with some lentils. Ate that over toast and had plenty left over for breakfast the next day.

1) Steamed the green beans to eat with some dressing.

2) Made beans and potato gratin by cooking up pinto beans, layering them on the bottom of a pan, putting thyme and a little onion on them, and then putting sliced potatoes on top. I thought I would need more potatoes than I did, so I had even more left over.

3) All this seemed a bit bland when I was done, so I served it up with salsa and a tortilla.

I have no idea why I forgot to take a picture of this. Sorry! I'll be better next week, I promise. 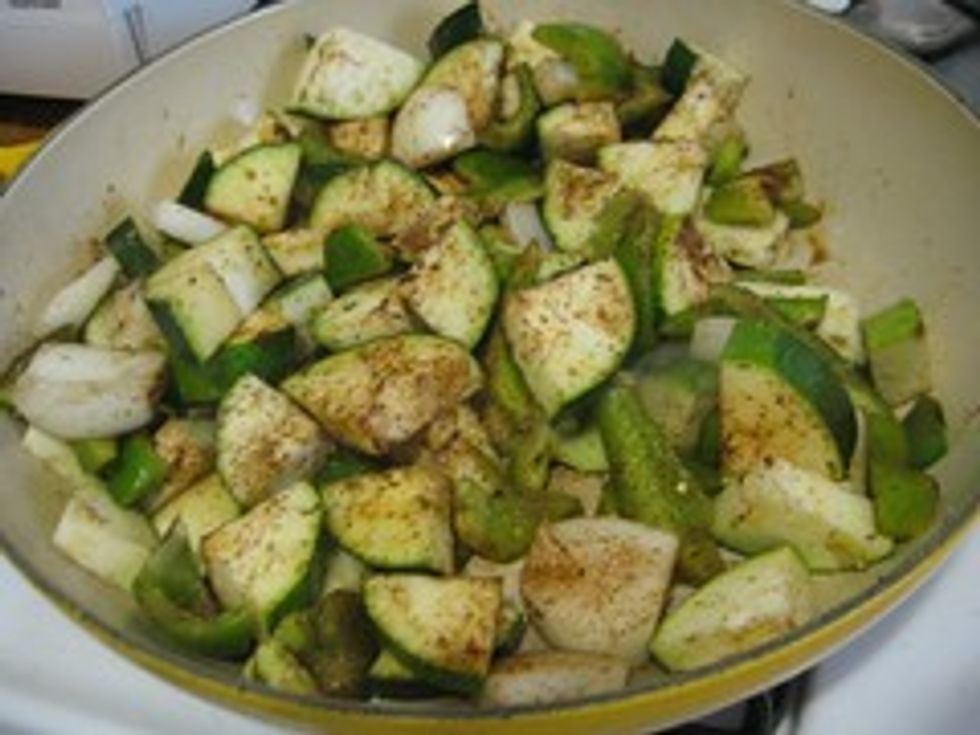 1) Had some leftover beans, so I chopped up a green pepper, zucchini and onion from the CSA, cooked them up quickly with garlic, cumin, chili powder, and a Goya packet and a touch of veggie broth. Ate this on tortillas with the beans.

Time: 15 minutes, which was good, because we had a bunch of stuff to do.

Soundtrack: No New York, the No Wave compilation. Mostly I was doing dishes and getting ready to go out, though, since dinner so was so quick. 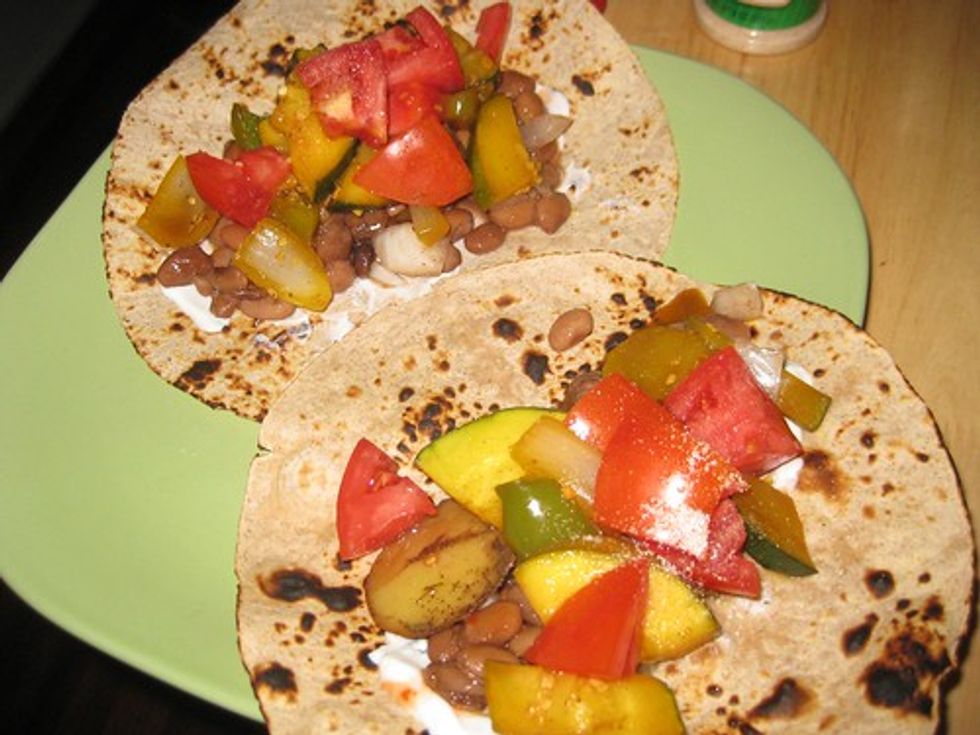 We were back from El Paso, and there were vegetables left over that were still good, but I didn’t know for how long, so I made them all up into a stir fry: corn, eggplant, green beans, onion, with the parsley from the CSA and basil from the fire escape. You put in the corn and onions first, then add the tofu and the eggplant with the sauce, then the green beans, parsley, and basil at the last minute. The sauce was basic fish sauce + veggie broth + soy sauce + garlic, plus some of the hot peppers. Served with rice.

Time: An hour with the time built in to salt the eggplant and press the tofu, but only 30 minutes of actual cooking.

Soundtrack: None. I watched news footage of Ken Cuccinelli’s war on abortion providers while researching the podcast. You’re welcome; listen to the podcast. It was totally worth it.

Leftovers: a ton. Seriously, I used everything I had except a cucumber and some potatoes. 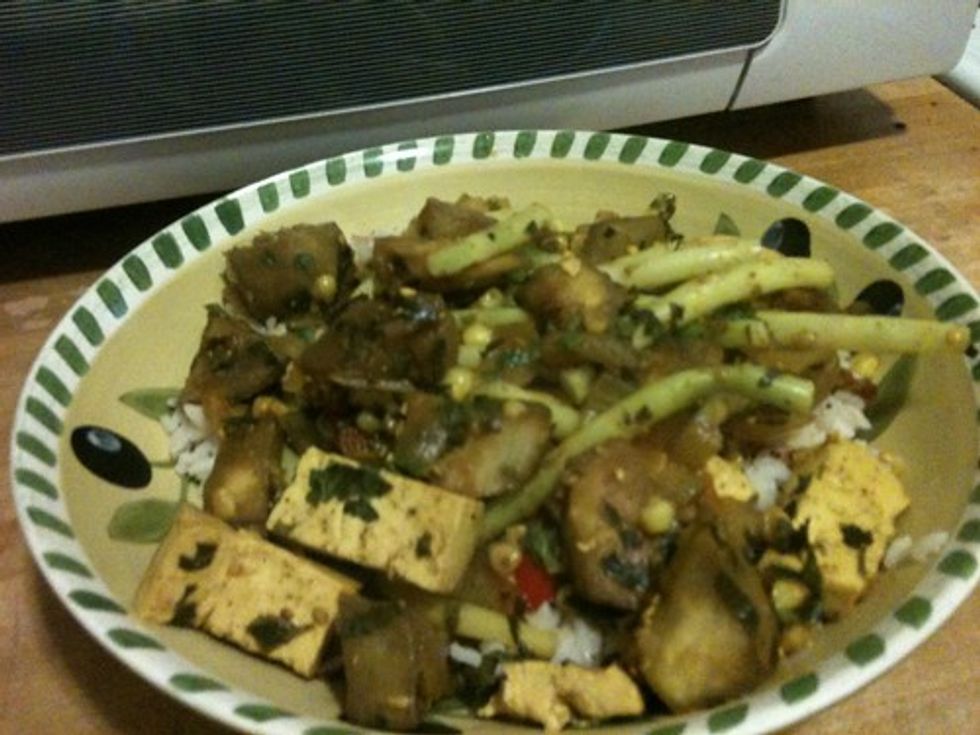 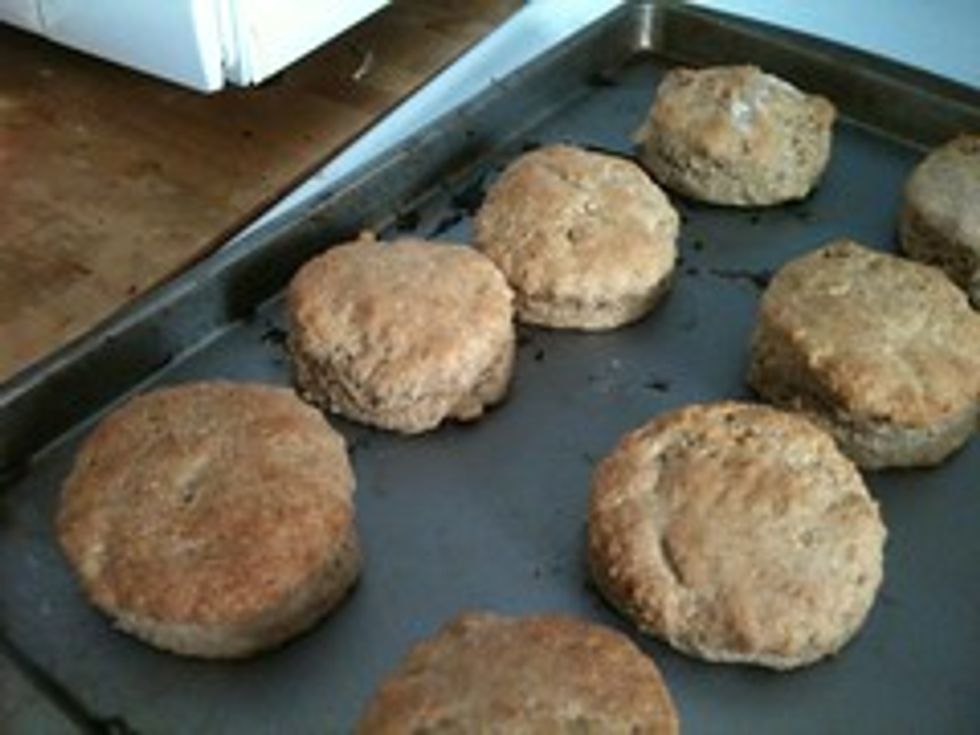 1) Made biscuits that are half whole wheat, half regular flour.

2) I was swimming in apples, so I used a recipe from Bittman’s book. I substituted a little minced garlic for shallots, but basically followed it: cooked apples first to get them soft, added red wine and thyme from the fire escape, and when that cooked off a little and the apples were soft, added a can of kidney beans.

3) Made the cucumber salad with soy ginger dressing. It’s something I’ve done a lot before. I wanted to be more original, but I was still playing catch-up and had to work with ingredients on hand in the 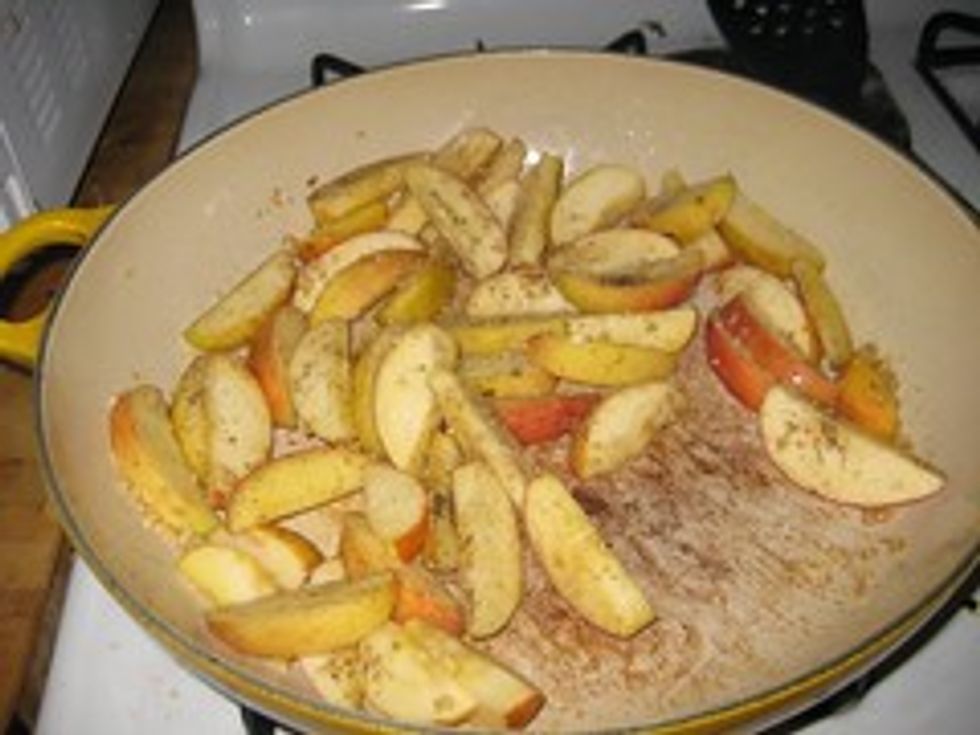 Time: Less an hour, including the biscuits. Without making them by hand, maybe 30 minutes?

Leftovers: Tons. Good for two lunches, at least. More, if you count the 6 biscuits left over.

Once again, I have no idea why the finished result didn't get a picture. I apologize!