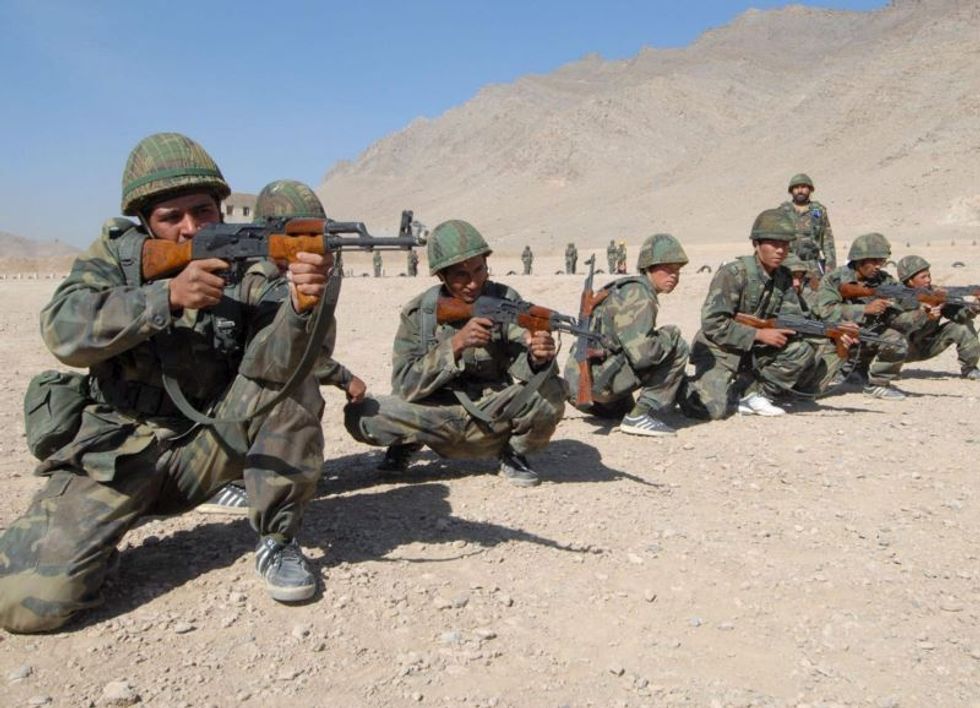 U.S. special operations forces are expanding their training of the Yemeni military as the Obama administration broadens its program to counter terrorism in countries reluctant to harbor a visible American military presence.

That balancing act has become an administration trademark, funneling millions of dollars in aid and low-profile military trainers to countries like Pakistan and Yemen in order to take on a more diverse, independent and scattered al-Qaida network.

The scope and amount of the military training in Yemen has grown slowly, reflecting the Pentagon's intention to tackle the terror threat while still being sensitive to fears that a larger American footprint in Yemen could help fuel the insurgency.

Over the past year, the number of elite U.S. trainers moving in and out of Yemen has doubled, from 25 to about 50 now. The numbers fluctuate depending on the training schedule, but U.S. forces are now providing a more complex level of instruction that combines tactical ground and air operations.

At stake is the stability of a troubled, poverty-stricken nation struggling to thwart al-Qaida-linked terrorists who are growing stronger and are increasingly targeting the U.S. and other Western interests.

"Yemen is the model for how we're going to conduct counterterrorism in the future," said Rick Nelson, a counterterrorism expert at the Center for Strategic and International Studies. "It is not going to be large-scale intervention as it was under the Bush administration and not because it is or isn't working but because it's economically unfeasible" to wage expensive wars.

The U.S. military training there, said one senior defense official, is aimed at fixing shortfalls in the Yemeni military's aviation, intelligence and tactical operations. And there also is training for the maintenance of aircraft and other systems.

Several U.S. and Yemeni officials spoke on condition of anonymity to describe the U.S. training effort, which is rarely discussed in public because of its politically sensitive nature.

Yemeni authorities have been careful not to discuss the U.S. presence. Yemeni President Ali Abdullah Saleh said during a Ramadan sermon last month that Yemen does not accept the presence of foreign troops in its territory. However, he admitted in March that there are American trainers in Yemen.

"There is no American presence on Yemen's land and seas," he said. "There is U.S.-Yemeni cooperation in counterterrorism, in training. And mission numbers no more than 40-50 people."

Saleh is concerned about his delicate alliance with the hardline groups and tribes that are most threatened by U.S. operations. And Yemeni media have accused the weak central government of giving up its sovereignty by allowing foreign troops to use Yemen as a battlefield against al-Qaida.

The careful growth of training by special forces in Yemen mirrors a slow expansion of a Pentagon counterterror training program in Pakistan, which officials say serves as a workable road map for building U.S. military relationships with government forces in terrorist strongholds.

The U.S. instruction of Pakistan's paramilitary Frontier Corps not only enhances the capabilities of the nation's security forces, but also makes it easier for American commanders to gather intelligence, establish contact with local populations and move more freely in the country.

U.S. trainers in Pakistan operate mainly in two training centers along the Afghan border. But their proximity to terror strongholds can also be a drawback. Earlier this year, three of the trainers were killed and two others wounded by a roadside bomb.

While the Obama administration is still pulling together its overall Yemen policy, there are strong indications it will call for a broader array of assistance and engagement with Yemen.

Experts on the Gulf region warn that military aid must be supplemented with economic, development and governance support. Too much emphasis on defense programs could make Yemen more militaristic, fuel militant recruiting and provide resources for the government's internal struggles against Shiite Hawthi rebels in the north and a secessionist threat in the south, said Christopher Boucek, a Yemen expert at the Washington-based Carnegie Endowment for International Peace.

"If we just focus on the military and security for them to become more lethal, it's not going to improve the country's security; it will only fuel recruitment and grievances," Boucek said.

Boucek, who was in Yemen earlier this year, said the increased military training force is more visible there now. And that growth has come as the country has transformed from being a place for terrorists to hide out or train to a place where militants can participate in jihad.

"More people are going there, they are more lethal and dangerous, and there is room for it to grow," he said.

U.S. training efforts in Yemen are part of a multi-pronged counterterrorism campaign that over the past year has included surveillance and intelligence sharing, along with several targeted cruise missile strikes directed at al-Qaida leaders.

More than 40 people were killed in December by air raids targeting al-Qaida leaders. Yemenis have reported sightings of unmanned aircraft hovering over the provinces of Shabwa and Marib, known as hideouts for al-Qaida militants.

Recently, U.S. officials have said they are looking at using armed predator drones to hunt down and kill al-Qaida leaders operating out of safe havens in Yemen's ungoverned regions. But such operations would be done only with the acceptance of Yemeni leaders, officials said.

The Pentagon has pledged $150 million in military assistance to Yemen this year for helicopters, planes and other equipment.

A senior Yemeni official said the government is looking most for a sense of commitment from the United States that does not ebb and flow as terror incidents with a Yemen tie occur.

The terror threat from Yemen has escalated in the past 18 months, with estimates that about 300 al-Qaida members or cells are operating there. The situation grabbed headlines after the Christmas Day Detroit airliner attack was linked to al-Qaida in the Arabian Peninsula, which is based in Yemen.

Yemen is also the base of U.S.-born radical cleric Anwar al-Awlaki, who is believed to have helped inspire the airline plot and other attacks in the U.S. The administration has the fugitive al-Awlaki on a kill or capture list.

In January, the country's most influential Islamic cleric, Sheik Abdel-Majid al-Zindani, warned against "foreign occupation." Al-Zindani is an extremist who once associated with Osama bin Laden and whom the U.S. has called "a specially designated global terrorist."

Senior U.S. military and counterterrorism officials say al-Qaida leaders in Pakistan — including Osama bin Laden — present the most serious threat and could best plan and execute a complex Sept. 11-style attack against the United States. This weekend will mark the ninth anniversary of the 2001 terror attacks.

Officials say al-Qaida in the Arabian Peninsula in Yemen represents a more imminent threat, although it would be more likely to throw together a simpler, less sophisticated attack aimed at the U.S.

The growth of the Yemen training program, and the sensitivities involved, mirror the effort in Pakistan. Over time, as the training gained acceptance from Pakistani officials, the number of U.S. special operations trainers grew from a few dozen to as many as 140 now moving in and out of the country.

The U.S. now has a more formal, established program there. To date, special operations forces have trained about 1,500 members of the Frontier Corps and 2,000 members of the Pakistani military.