Google tests cars that drive themselves, in traffic

An electronic brain devised by US Internet titan Google has driven cars nearly a quarter of a million kilometers in California, on a quest for the next great revolution in the auto industry.

News of the experiment emerged from Google this weekend, revealing what the New York Times describes as an attempt to use artificial intelligence to revolutionize the automobile.

But the software, linked to GPS satellite navigation technology, was nearly fooled by a humble cyclist who jumped a red light. 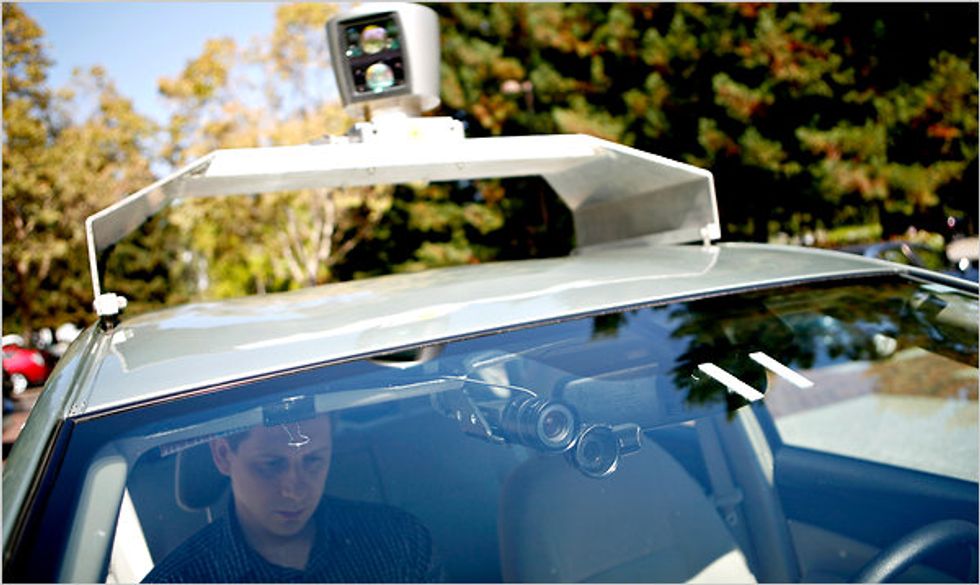 A humanoid, in the form of a Google engineer, slammed on the button to disconnect the system, and an accident was averted.

"One of the big problems we’re working on today is car safety and efficiency. Our goal is to help prevent traffic accidents, free up people’s time and reduce carbon emissions by fundamentally changing car use," Sebastian Thrun, a Google engineer said on a company blog posting.

"So we have developed technology for cars that can drive themselves. Our automated cars, manned by trained operators, just drove from our Mountain View campus to our Santa Monica office and on to Hollywood Boulevard.

They’ve driven down Lombard Street, crossed the Golden Gate bridge, navigated the Pacific Coast Highway, and even made it all the way around Lake Tahoe," he added.

The engineer explained that in the experimental enterprise "automated cars use video cameras, radar sensors and a laser range finder to 'see' other traffic, as well as detailed maps (which we collect using manually driven vehicles) to navigate the road ahead."

But the vehicles are not unmanned for safety reasons; safety drivers are behind the wheel in case they are needed, Thrun's posting said.

According to The New York Times, the Google research program is using artificial intelligence to revolutionize the automobile, making a step beyond its work on Internet search engines.

During a half-hour drive beginning on Google’s campus south of San Francisco last week, a Toyota Prius equipped with a variety of sensors and following a route programmed into the GPS navigation system accelerated in the entrance lane and merged into fast-moving traffic on Highway 101, a freeway that goes through Silicon Valley, the report said.

The car drove at the speed limit, which it knew because the limit for every road is included in its database, the paper said.

The device on top of the car produced a detailed map of the environment.

The car then drove in city traffic, stopping for lights and stop signs, as well as making announcements like "approaching a crosswalk" or "turn ahead" in a pleasant female voice, The Times said.

Christopher Urmson, a Carnegie Mellon University robotics scientist, was behind the wheel but not using it.

To regain control of the car he has to do one of three things: hit a red button near his right hand, touch the brake or turn the steering wheel, the paper said. He did so twice, once when a cyclist ran a red light and again when a car in front stopped and began to back into a parking space.

The car was the brainchild of Thrun, director of the Stanford Artificial Intelligence Laboratory and a Google engineer, who led a team in designing the Stanley robot car, winning a two-million-dollar Pentagon prize.

But autonomous vehicles poses thorny legal issues, The Times said. Under current law, a human must be in control of a car at all times.

"The technology is ahead of the law in many areas," Bernard Lu, senior staff counsel for the California Department of Motor Vehicles, told the paper.

"If you look at the vehicle code, there are dozens of laws pertaining to the driver of a vehicle, and they all presume to have a human being operating the vehicle."

But Thrun believes the automated car can save lives by reducing the number of accidents caused by human error.

"According to the World Health Organization, more than 1.2 million lives are lost every year in road traffic accidents," he wrote. "We believe our technology has the potential to cut that number, perhaps by as much as half."