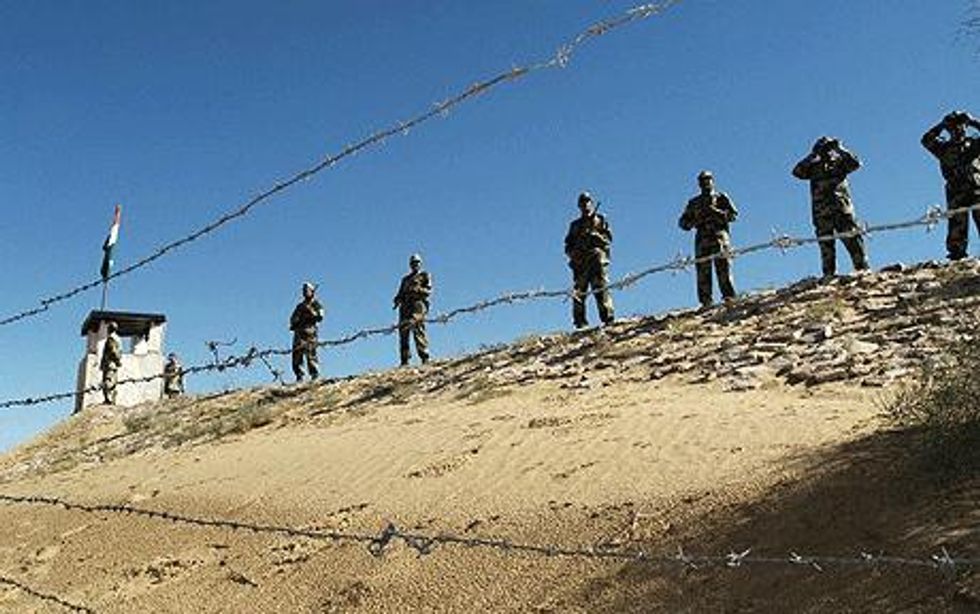 Pakistan said Thursday it has not decided when to reopen a key border crossing NATO uses to ship supplies to Afghanistan despite a U.S. apology for a helicopter attack that killed two Pakistani soldiers.

A suspected U.S. missile strike, meanwhile, killed three people in a northwestern Pakistan tribal region along the border, the latest in a surge of such attacks on militant strongholds, intelligence officials said.

Both the U.S. and NATO expressed their condolences Wednesday for the Sept. 30 attack and said American helicopters mistook the Pakistani soldiers for insurgents being pursued across the border from Afghanistan.

The apologies raised expectations that the Torkham border crossing along the famed Khyber Pass could reopen very soon. But Pakistan Foreign Ministry spokesman Abdul Basit said at a news conference Thursday that authorities were still evaluating the situation and would make a decision "in due course."

The delay could be short-lived since U.S. and Pakistani officials predicted the border crossing would be reopened in a matter of days even before the apologies were issued.

Pakistan closed Torkham to NATO supply convoys on the same day as the attack, leaving hundreds of trucks stranded alongside the country's highways or stuck in traffic on the way to the one route into Afghanistan from the south that has remained open.

Suspected militants have taken advantage of the impasse to attack stranded or rerouted trucks. Gunmen torched 70 fuel tankers and killed a driver in two attacks Wednesday.

The U.S. ambassador to Pakistan, Anne Patterson, said in a statement Wednesday that "we extend our deepest apology to Pakistan and the families of the Frontier Scouts who were killed and injured."

The U.S. and NATO issued apologies after their investigation found that the Pakistani soldiers fired at the two U.S. helicopters prior to the attack, likely trying to notify the aircraft of their presence after the helicopters entered Pakistani airspace several times.

The head of the investigation — U.S. Air Force Brig. Gen. Tim Zadalis, NATO's director for air plans in Afghanistan — said the "tragic event" could have been avoided with better coordination with the Pakistani military.

Both the head of NATO forces in Afghanistan, Gen. David Petraeus, and the chairman of the U.S. Joint Chiefs of Staff, Adm. Mike Mullen, pledged to work with Pakistan to make sure it doesn't happen again.

"Please know that the families of the soldiers in this tragic incident are in our constant thoughts and prayers," Mullen wrote in a letter he sent to the head of the Pakistani army, Gen. Ashfaq Parvez Kayani.

NATO officials have insisted the border closure has not caused supply problems for troops since hundreds of trucks still enter Afghanistan each day through the Chaman crossing in southwestern Pakistan and via Central Asian states.

But reopening Torkham is definitely a priority for NATO because it is the main crossing in Pakistan, the country through which NATO ships the majority of its supplies into Afghanistan. Other routes are more expensive and logistically difficult.

Despite the border tensions, the U.S. has kept up its missile strikes in Pakistan's tribal belt, where several militant groups are based.

The one Thursday targeted a vehicle in a thickly forested area near the town of Mir Ali in the North Waziristan tribal region, two Pakistani intelligence officials said.

The identities of the dead were not immediately known, but the territory is believed to be controlled by Pakistani Taliban militants.

The strike Thursday would be the sixth suspected missile attack this month, keeping up a recent surge in such CIA-run, drone-fired attacks. In September, the U.S. is believed to have launched at least 21 such attacks, an unprecedented number and nearly all in North Waziristan.

The two officials spoke on condition of anonymity because they were not authorized to talk to the media.

The U.S. rarely acknowledges the covert missile strike program. Pakistan officially opposes the program, but is believed to secretly support it.