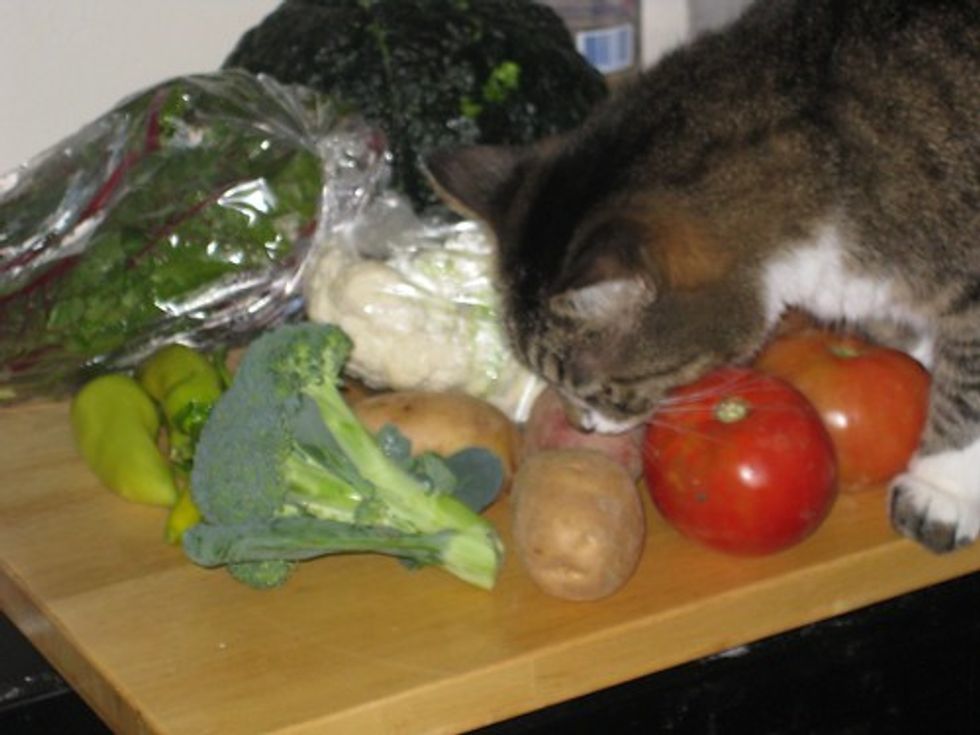 Just two more weeks left of the regular season community supported agriculture project. But no worries---in November, I move onto the 5 week extension. Since winter vegetables are often what perplex me the most, I'm looking forward to getting the creative juices flowing.

1) I hadn’t done any cooking over the weekend, because we were going out with a friend who was visiting, so I thought it would be fun to spend some time Sunday getting some time in the kitchen by myself, doing more time-consuming tasks. I started by making some veggie broth on the stove with the scraps I collect from cutting up vegetables. 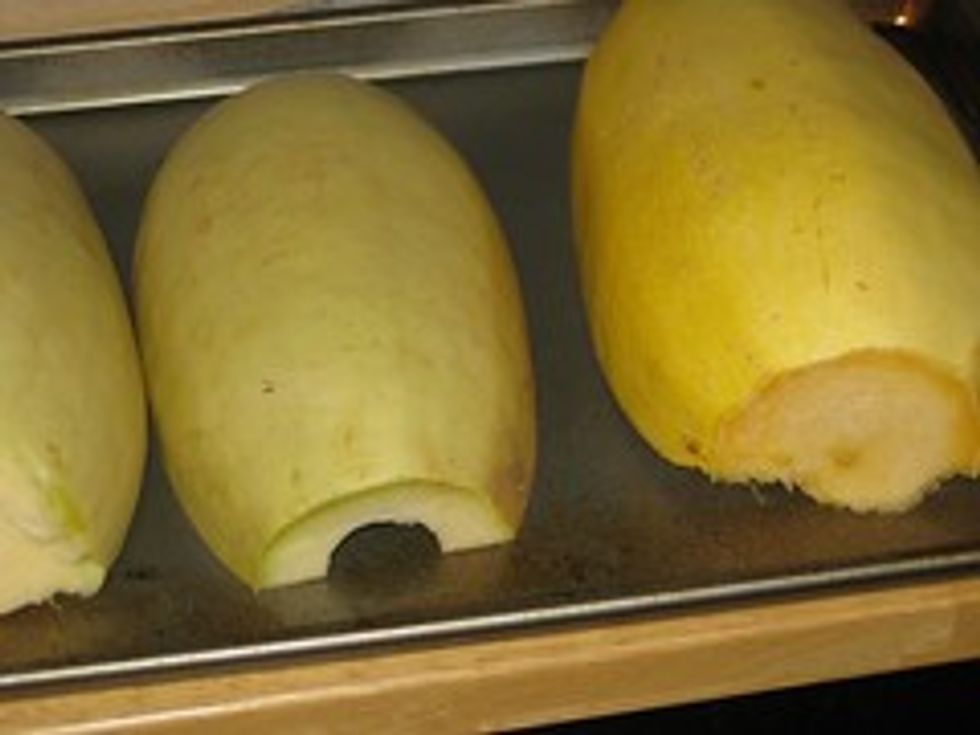 2) I had two big spaghetti squashes (one from the grocery store, one from the CSA---long story), and these always take some muscle to prepare, so I thought I’d just whip that out while I was cooking veggie broth. Cut them in half, deseeded them, and put the face down in the oven for 40 minutes at 375. Put them in the fridge when done.

1) The oven was already hot, so I made the dough for this particular no-yeast sandwich bread. After I pulled the squash out and lowered the temperature to 325, I put the bread pan full of this in and let it cook for an hour. 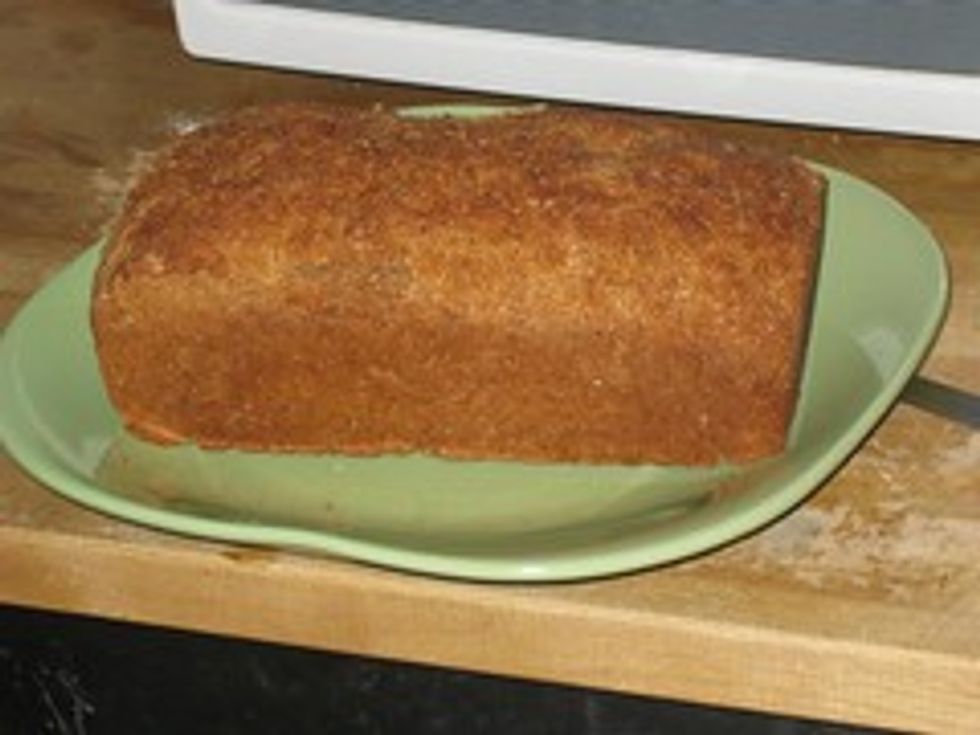 2) Bittman also has a recipe for veggie burgers made with beets, prunes, and bulgur wheat. I thought the dried fruit would be a nice sweet counterpart to the bitterness of radishes and turnips, so I substituted my radishes and turnips for the beets, and added carrots. This was a lot of vegetables, so I doubled all the other ingredients. I substituted raisins for prunes and bread crumbs for almonds---just to basically use everything I had on hand. You have to let this one steep in boiled red wine for 20 minutes, which was nice, because it gave me a chance to do all the dishes while I waited. After that, you form patties and cook them in a skillet. 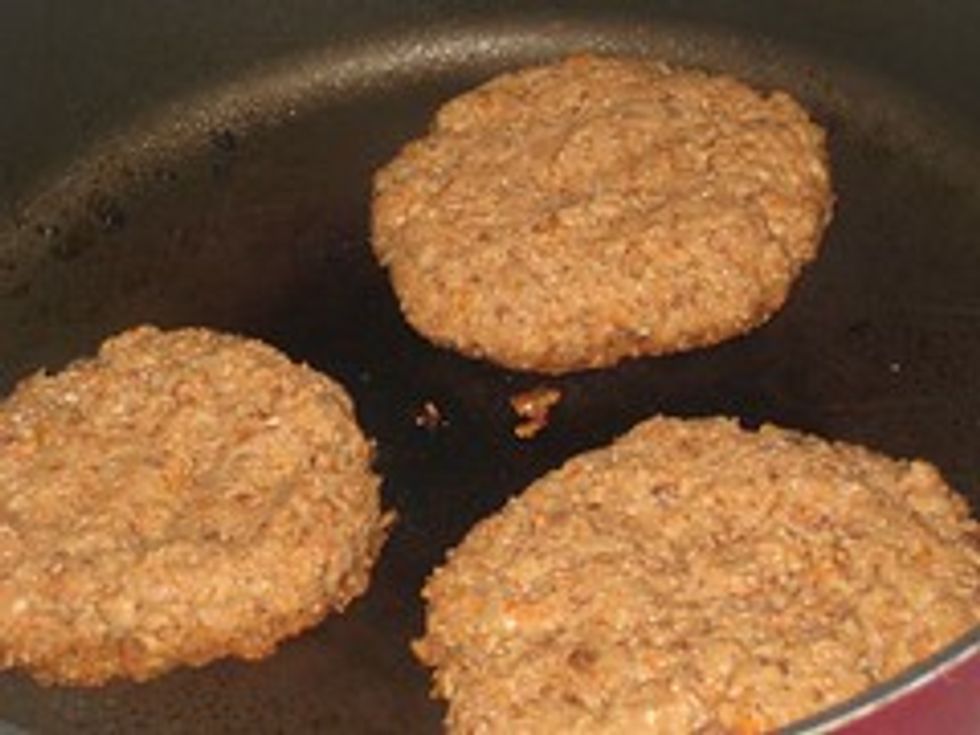 3) Steamed broccoli. Served it with some yogurt sauce.

4) Put the veggie burgers on slices of the bread with some tomato and a little cheese. As expected, the sweetness of the bread, carrots, and raisins counter-balanced any traces of bitterness in the radishes or turnips. Highly recommended.

Time: An hour and a half, but if you just used pre-made bread, about 45 minutes.

Leftovers: A whole lot of patties, which were really good for breakfast. But so many I had to reuse for another dinner. 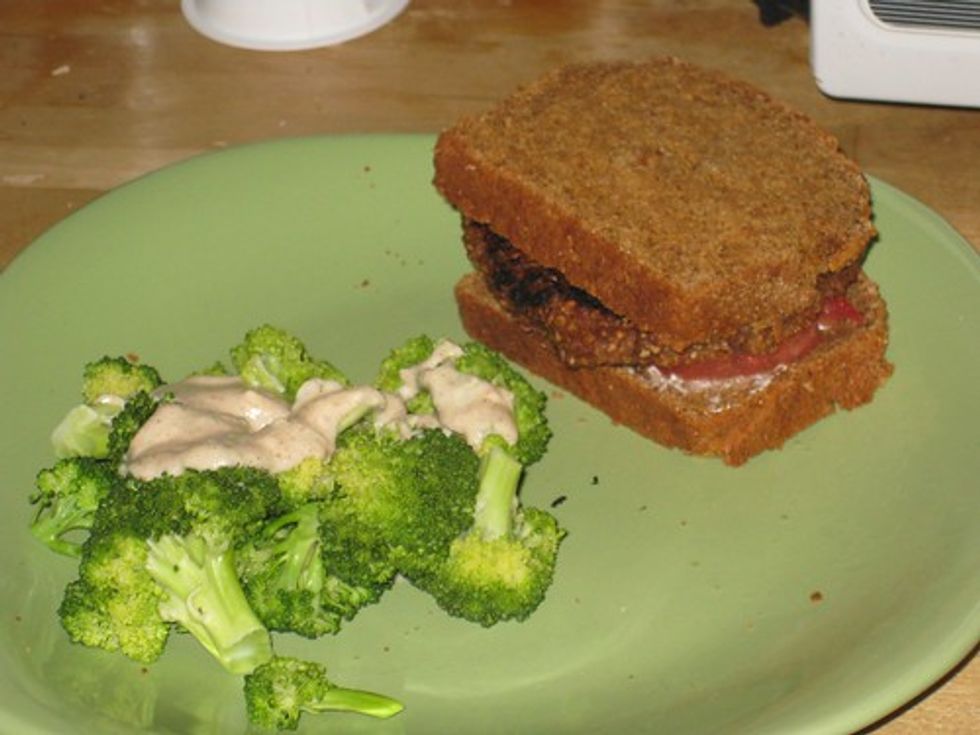 Took some of the pre-cooked spaghetti squash, tossed in some chick peas and some of the cabbage, poured some pre-canned marinara on it, and nuked it for a couple of minutes. Delicious and most importantly, quick. 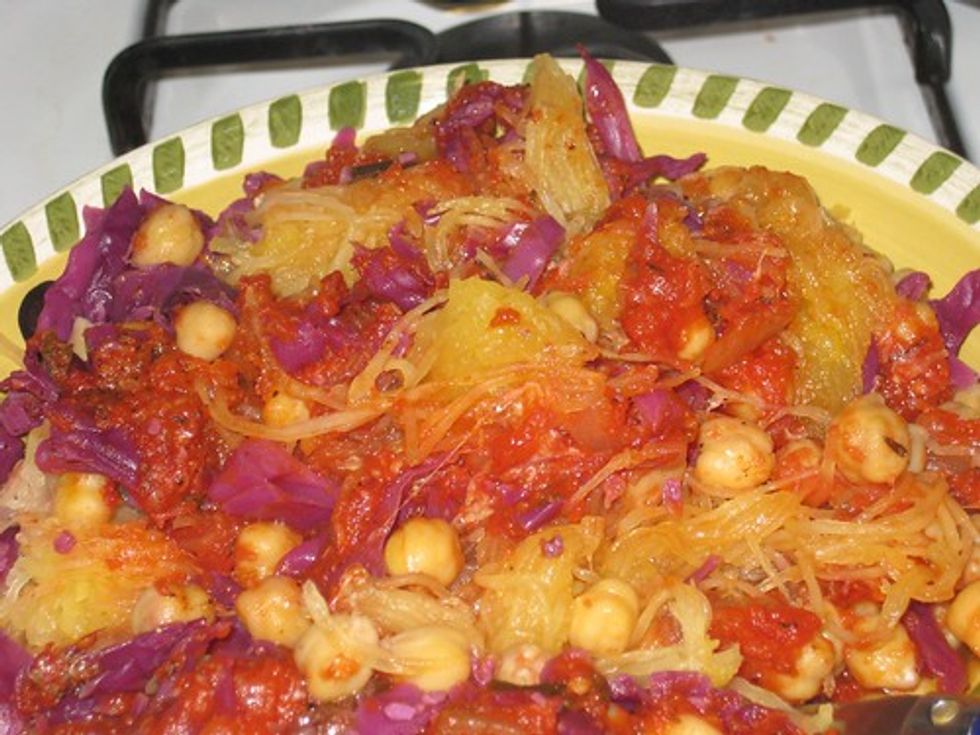 1) Had so many veggie burgers left over, decided to just go ahead and do them again, but with sides to mix it up. Since we were out of tomatoes, I also topped them with salsa and a little cabbage.

2) Nuked some of the spaghetti squash.

4) Used what I had left of the yogurt in the fridge to make a quick yogurt sauce. Poured this over the beets and the spaghetti squash.

Time: 45 minutes, but only to roast the beets. Actual work was 10 minutes of my time. 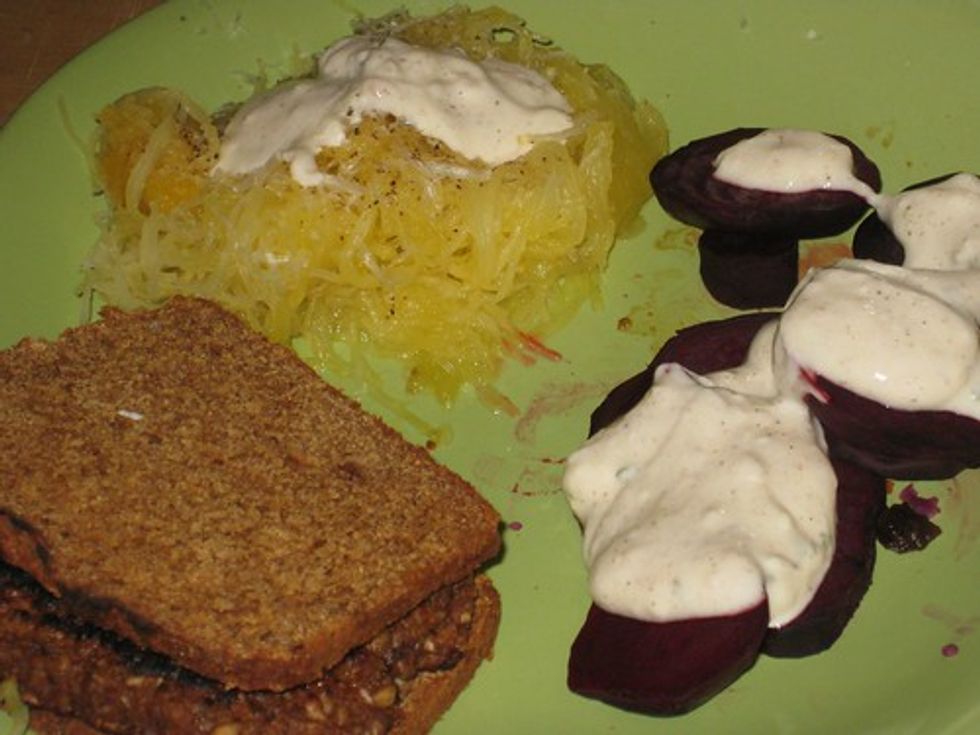 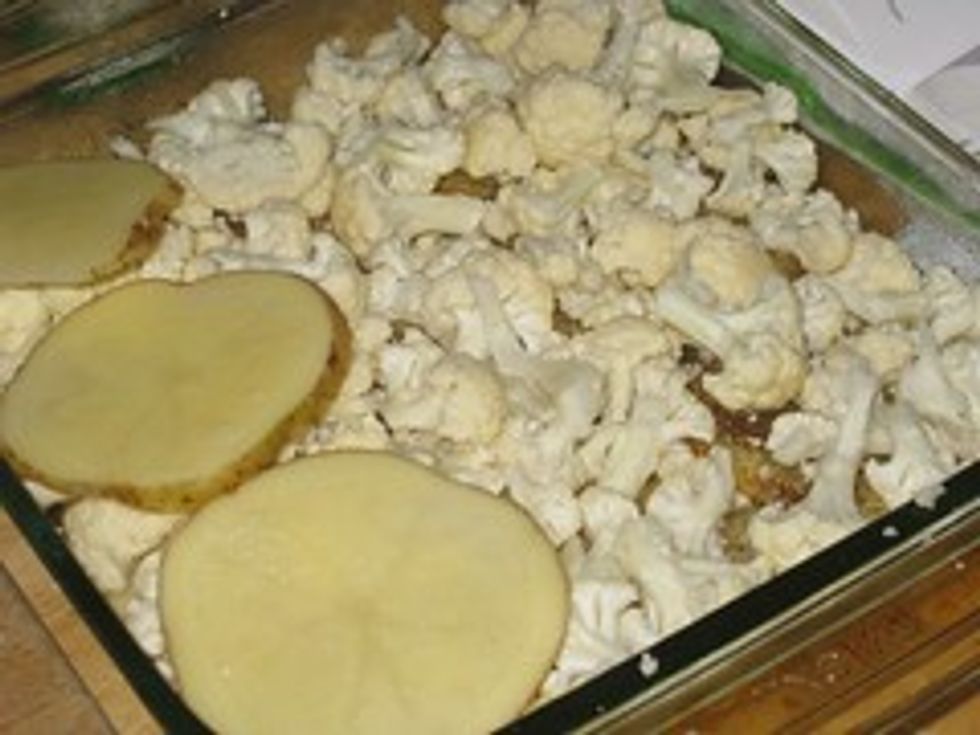 1) Now that it’s getting cold in the apartment, running the oven for dinner is just nice, because it warms the place up. Used a Bittman recipe to make a potato and cauliflower gratin, with a mix of sour cream and milk for the dairy parts. This ended up being more watery than I would have liked. Dunno what to do about that.

2) Cut up some asparagus that was on sale at the store and put that in the oven, too.

3) While that was cooking, put together the ingredients in this recipe. I also had time to clean up all the dishes and counters before I pulled the other stuff out. When I did, I reheated the oven to 425 and let the dessert cook while we ate. 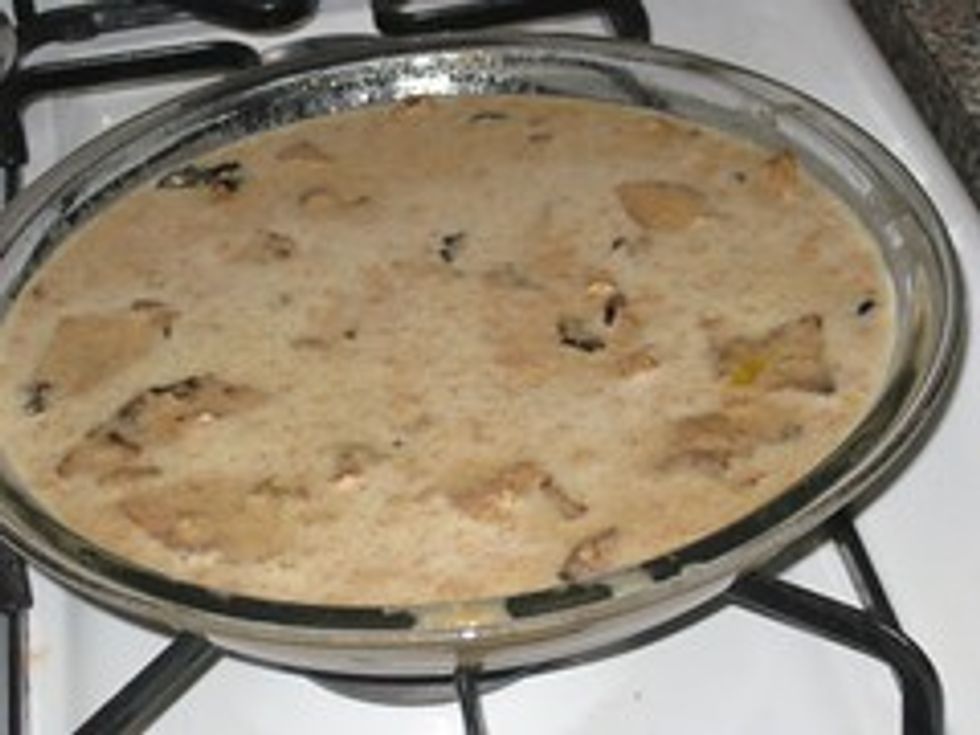 Time: An hour and a quarter.

Soundtrack: Watched some Grit TV and listened to Iggy Pop.

Leftovers: Lots of the apple dutch babies (I gave some to friends), and enough of the gratin for a lunch. 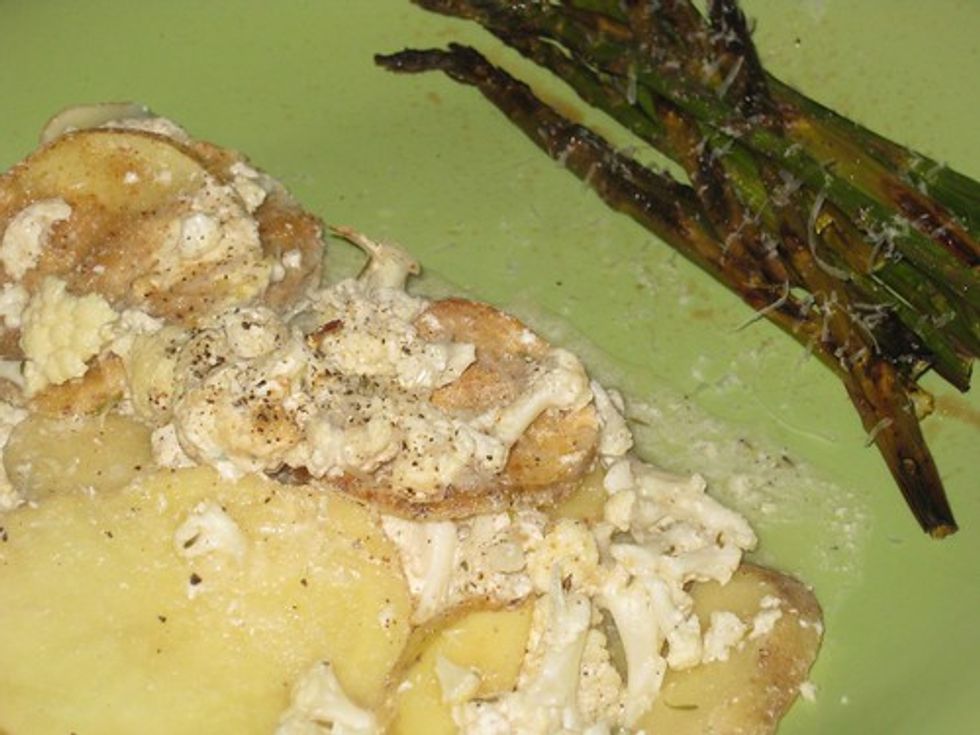 Marc doesn’t like cauliflower, but I do. Especially the stuff from the CSA, which is full of flavor. So I wanted to cook up the cauliflower for lunch. One of my junk food weaknesses is I love Kraft mac and cheese---it’s easy, and it’s tasty, and it’s not that bad if you cut the butter but double up the skim milk. I usually also dress it up with a bag of peas. So this time I steamed cauliflower and threw that in, too. It was so good, I’ll tell you what. It’s also good for at least two lunches. I suspect this would be a good way to get kids to eat cauliflower.

1) As I noted yesterday, my kitchen was cold in the morning, so I figured I might as well warm it up by cooking. I cut the pumpkin in half, deseeded it and roasted it. 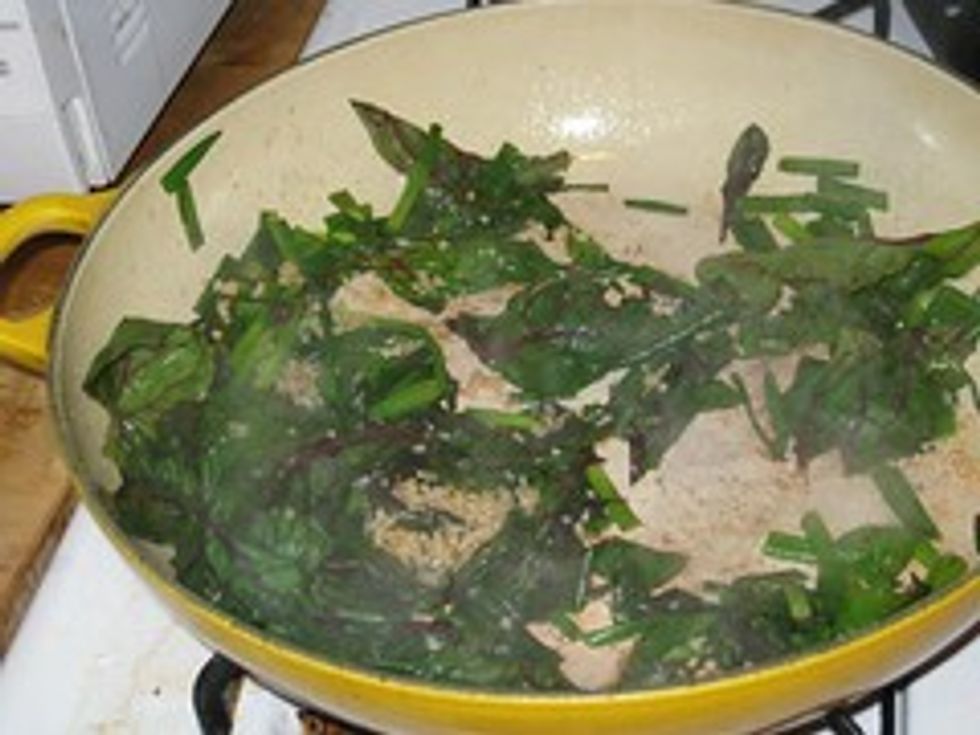 2) While I was at it, I started soaking kidney beans. I also took the chard, chopped off the stems, and cooked it with some onions, garlic, and veggie broth. When it was done, I put it in the fridge with some lemon juice.

3) After the roasted pumpkin cooled off, I pureed it in the food processor, and put it in the fridge.

4) Had a few more minutes left to hang out, read blogs, etc., so I peeled and cored some apples. Lemon juice, Tupperware, into the fridge.

5) When I came home after stepping out for a bit, I cooked the apples for 30 minutes, a la Bittman’s instructions for applesauce. Let it cool while I did some work, tossed it in the food processor with cinammon, buzzed it into applesauce, and put that in the fridge.

1) Made pumpkin bread using Jamelle’s recipe, with the pumpkin I had pureed earlier. 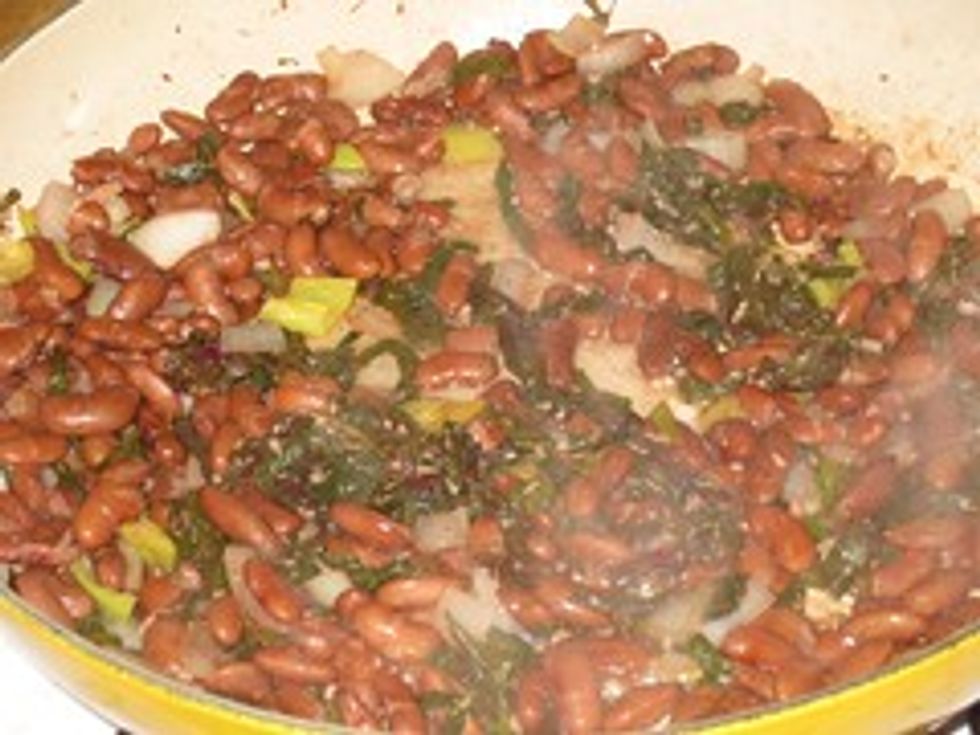 2) Put the pre-cooked greens in with some kidney beans, some thyme, a chopped small onion, and a chopped up banana pepper. Cooked it with occasional infusions of veggie broth.

3) Pour some apple sauce in bowls and heated it up.

Time: About an hour with all the prep. 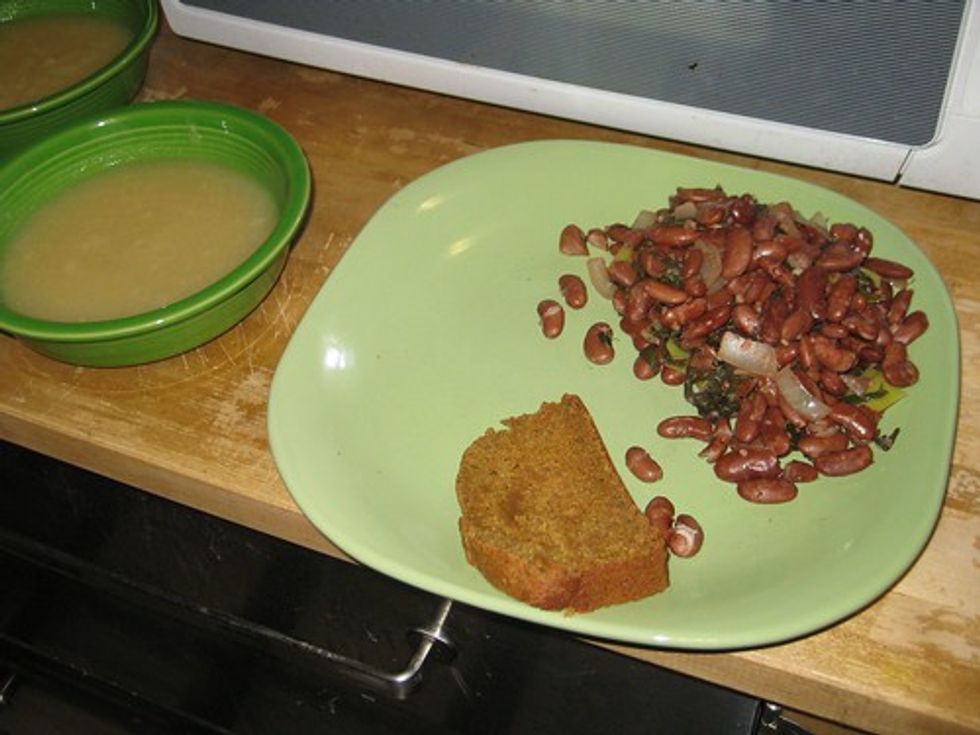