So, Rock Band 3 came out on Tuesday, and it's been ever so much fun. I was pleased as punch to see that they included many bands that I always thought they should have more of, bands they were probably holding out on until they got the keyboards: The Cure, Yes, Elton John, and the Beach Boys. Here's the complete song list. But of all the new songs, I have to admit this one tickled me the most, and it's going to be the original song for this week's Genius Ten. I haven't sung it yet, but out of male singers, at least, playing at being Morrissey is second only to playing at being Iggy Pop, in terms of sheer shit-eating grin fun.

Original song: "Stop Me If You Think You've Heard This One Before" by The Smiths

One of the greatest parts of growing up in the Southwest is that there is a thriving cult of Morrissey and The Smiths out there, with a side dose of love for The Cure. The greatness of these bands never stopped being recognized. If they had a Smiths reunion concern that only toured the Southwest United States, they would make more money than they know what to do with. I remember the first time I encountered someone outside of this bubble who had sneering disregard for The Smiths, which I later discovered is not an uncommon sentiment, particularly in the world of white guys. I was floored. It was like making fun of, well, like Joy Division. Aren't they sacrosanct?

Speaking of, if the game only included Joy Division and/or New Order, I would die a happy video game dork. Leave your list in comments, thoughts about Rock Band 3, or thoughts about anything at all. Open thread. Link whore, if you want. Fridays: they're alright for link whoring.

3) "Alec Eiffel" by The Pixies

8) "The Headmaster Ritual" by The Smiths

10) "Sound of Silver" by LCD Soundsystem

Videos and a cat picture of exquisite cuteness below the fold.

If I lay down in bed to read---especially if Marc's not in the room, and they feel they can have me all to themselves---the cats are usually on top of me within milliseconds. 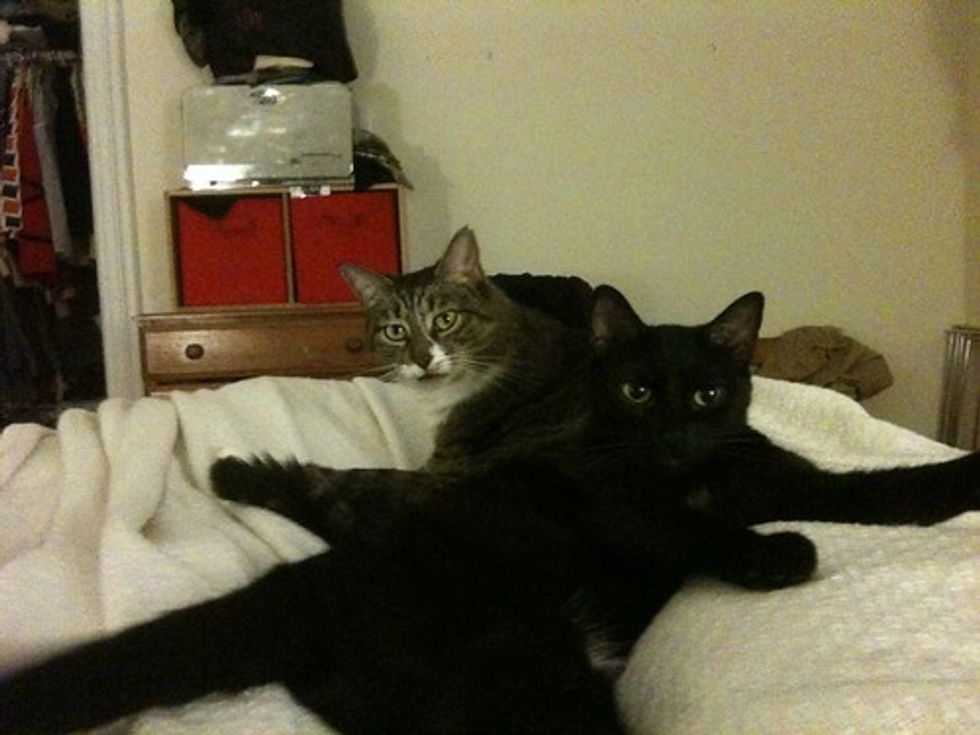 Shortly after this photo was taken, Dusty started to fuck with Molly, until Molly took off, and then Dusty took her spot.