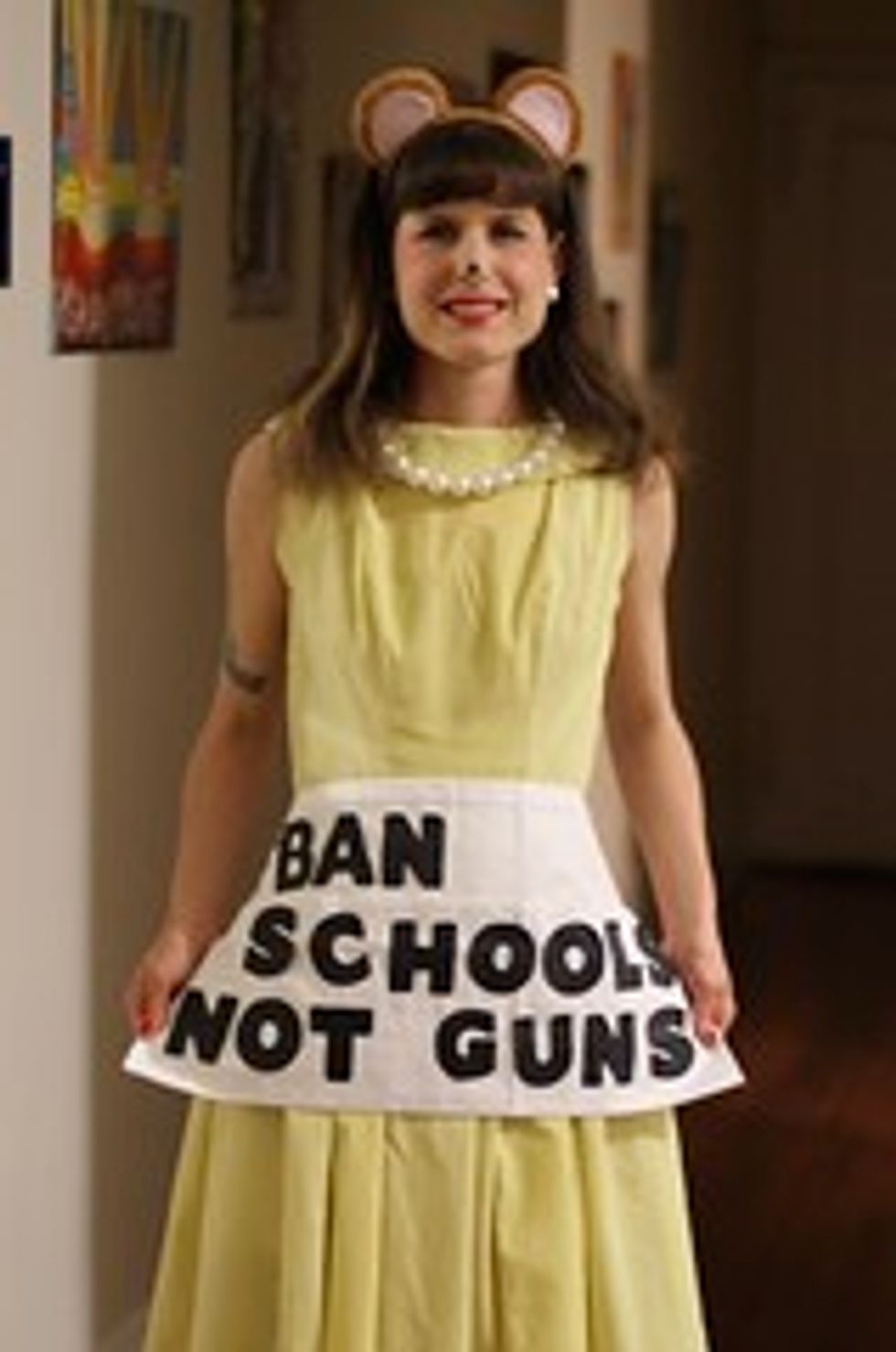 As promised, I was a "mama grizzly" for Halloween. Thought it would be a funny illustration for this post, which is otherwise very serious.

I really enjoyed reading the reports coming back from the Rally to Restore Sanity. While some people took Jon Stewart's cry to mean, "Having political beliefs and ideas makes you a bad person, and reasonableness is the same as being apolitical", I think the general idea was well-communicated, which is that policy should be based on reality, and political debate should be reasonable. I don't think this means that one should lose their sense of humor or not call bullshit when you see it---on the contrary, and clearly the organizers agree. Stewart is sucked into that "both sides" mentality, and personally I think it's because he over-relates to some issues wingnuts have, even as he intellectually disagrees with them. (Which is why talking about abortion makes him uncomfortable, and he's willing to entertain the ludicrous notion that someone like Mike Huckabee---who backs an entire slate of policy ideas designed to make women second class citizens and push gays out completely---has "moral" reasons for supporting a ban on abortion that just so happens to fit neatly with his overall sexist agenda.) Stewart's weirdnesses aside, I think the whole thing was an overall success, and regardless of the non-partisan nature of it, it sent the signal loud and clear that the Democrats stand for "sanity". It's kind of sad that it's gotten to that point---I wish they stood for liberal values alongside reason---but it definitely makes an argument for why people that aren't fired up about the elections need to be.

I wish they'd done it a week earlier, though. Partially for selfish reasons, but also because the message---that reason is a value---needed to percolate in the electorate more. As it stands, nutty is winning out, at least wingnutty is.

Despite scandals that have non-stop rocked the campaigns of Joe Miller, Rand Paul, and Sharron Angle, all are likely to win. Some are in neck-and-neck races, but I fear extensive voter suppression tactics from the right, the fact that this is a midterm and a lot of first time voters aren't going to vote again, and the sense that the world is going to hell amongst liberal-leaning voters might be that which cinches it for them. (But you can turn out to vote and encourage others to do the same, and try to reverse that!) A lot of voters are low information and have actually tuned all this shit out, and so may have no idea what kind of nuts they're voting for.

All that said, Republicans are doubling down on getting out the base over trying to win over the middle, and I'm sure they have very good reasons for it. In many ways, this election was a test---how far could they go in terms of provoking reactionary anxieties in their base voters before their base voters said, "Uh, that's too far for me." The answer is that they have yet to find any real limits. Overtly racist pandering? The base eats it up. Demanding that women be forced to bear rapists' children? They love it. Standing for laws that could be used to ban birth control? Ken Buck and Rand Paul are two that I know do, and that doesn't seem like it matters to the base. Which makes sense, since a Daily Kos-commissioned poll of Republicans showed that 31% of them would ban contraception, and 34% would ban the birth control pill specifically. (I really, really want to see the age breakdown of these numbers.) Even Christine O'Donnell is closing the gap. The big lesson that Republicans are learning is there is no natural cap to the nutty. I imagine it might just get worse from here on out, as it appears that the vortex that sucks reasonable white people in and shoots them out as Birther-believing, gun-wielding wingnuts appears to be growing rapidly. If you're still a reasonable white person from the middle class, I highly suggest that you tie yourself to something substantial in your house until after Election Day, so that you can't be sucked in, a la Poltergeist.

What's weird is that the narrative shaping up is that the teabaggers hurt the Republicans. Salon has an article about Joe Miller up that asks if he went too far, and the answer is in the polling data---he's points up from Murkowski and will almost surely win this. The only reason Sarah Palin is pretending to be frantically campaigning to "save" him is so that she can take all the credit when he wins. This writer seems to think Sharron Angle was saved by the media focus on Christine O'Donnell, but I disagree. I think a lot of the voters dig that gun nut, woman-hating, racist vibe she gives off.

The most depressing example of this is Rand Paul. You can't say that the curb stomp of Lauren Valle wasn't well-covered. When I was pointing out late last week that the polls showed Paul up and this means that a lot of voters are like, "Stomp non-compliant women into the ground? I want a piece of that!", I was duly informed that this was merely the "Aqua Buddha" bounce, and had nothing to do with the curb stomp. Well, here's a new poll that shows that Paul got another bounce. So, I was wrong and then I was right. Unfortunately, I was more right than I initially thought with the bad information---the curb stomp didn't just put Paul at 50%. Now he's a 55%. I wish I could say I'm surprised, but there's an ugly, misogynist bent to the Paul campaign (which combing through the archives here will demonstrate), and the curb stomp fit right into it. I would call anti-feminist sentiment "frenzied" right now. Even more so is racist sentiment, and Paul is going to sweep up with that, since he opposes the Civil Rights Act.

The reason for all this is reason went out the door a long time ago. At RH Reality Check and at the Guardian, I basically argue that this is by design. It's nothing new to talk about how fear is being used to wash out all reasonable thought in the conservative-leaning voting public, and get them into a frenzy that will presumably result in more votes. (Though I have to point out that they're so frenzied that voting, a private and quiet and quick act, will hardly satisfy.) My focus was on how the conservative movement stokes irrational fears of emasculation that lead the followers to believe that their phallic totems (guns) are going to be forcibly ripped from their hands, and to also angrily attack abortion rights, seen as a feminist conspiracy to throw of men's right to dominate our bodies through pregnancy. (I make it clear that there are many ways to view pregnancy, but that the idea that it's flag-planting of a man's penis power in a woman's body is the anti-choice view.) The two issues are barely discussed in the mainstream media, but within large parts of the base, they talk of little else.

I didn't talk about racism, because that really fell out of the scope of this project, but it's a similar idea, and in many cases, it's the same idea. The same notion that feminists, gay people, and pointy-headed girly Democratic men are out to emasculate Real America with abortion rights and gun control is in play with anxieties about the end of white supremacy. Even the same emasculation-type imagery is used. Just as hostility towards gay men is escalated by implying there's subversion, invasion, and impurity in the "homosexual agenda", so are groups targeted by racist language described. Mexican immigrants are seen as invading. The Cordoba House was routinely described as if it was some monument of conquest instead of a community center. The image they're trying to paint is one where conservative white men and "their" women shudder at the feet of powerful minorities, feminists, and intellectuals---with additional fears of emasculation and accompanying fears of being unprotected. With all this psycho-sexual nonsense going on, there's not a whole lot of mental energy left to think about things like economic policy, foreign policy, or absorb actual facts about taxes and unemployment. Which is where Republicans want people to be, because rational approaches to politics don't get Republicans elected.