Festivus: In many ways, more real than those boring old religious traditions 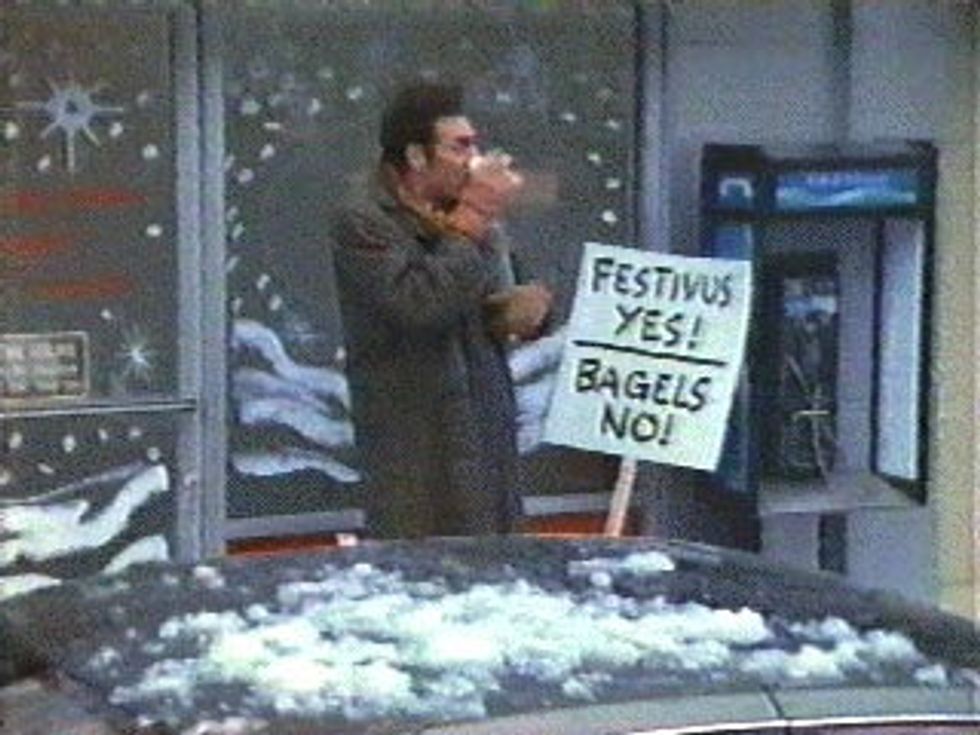 Via Lindsay comes one of those stories that just brightens up a day that was otherwise ruined by this white, wet stuff on the ground you Yankees call "snow".

Locked up in a California jail, Malcolm Alarmo King wanted healthier meals. In an argument apparently made to a friendly court, he won a ruling from Superior Court Judge Derek Johnson that he should be fed double-portion kosher meals.

Battling to keep its food costs down, the sheriff's department argued that King himself admitted "healthism" was the so-called religion justifying this request. But Johnson wasn't daunted, calling a sidebar with King's lawyer, Fred Thiagarajah, and the county prosecutor and asking for suggestions about a religion he could cite in the kosher-meal order to nail the issue down once and for all, reports the Orange County Register.

“I said Festivus,” Thiagarajah tells the newspaper--and Festivus it was. The holiday (Festivus for the rest of us) was created by the writers of the popular Seinfeld television show, county counsel argued to no avail.

Sometimes you can feel it when a million pedantic internet commenters are firing up their keyboards, so let me just pre-emptively note that everyone is aware that Festivus was conceived as a holiday, not a religion. But surely we can see the forest despite the slightly inaccurate trees here. And that forest is composed of win. Decisions like this tend to expose the underbelly of religious claims, which is that they are based on air and bullshit and so there's exactly zero reason that you can't make similar claims that are admittedly farcical, and deserve to have them taken exactly as seriously. How do you rank bullshit, after all? Why should someone else's made-up bullshit be considered superior because it's so much older? There was a time when Christianity was as new as this faith "Festivus", after all.

You could, I suppose, say that a faith should be judged by how much the people in it actually believe it. But my faith, the Church of the Mouse and the Disco Ball, was established on the grounds that our devout don't believe their own bullshit. This is a core tenet of our faith, and to deprive us of it would be religious persecution. Also, if you start demanding that people actually believe bullshit before it becomes a real religion, you're going down a rabbit hole. If believers actually have to believe their beliefs, you'd start losing a bunch of 'em, honestly. Not that you could tell. How would you prove someone really believes what they say they believe, or that they just follow a religion because of convenience, custom, or an inability to ask hard questions of themselves? You can't. In fact, belief in Festivus has one thing going for it over many other believers' beliefs, which is that the faithful person has converted, so there's some evidence that they really thought about it and made decisions. Most religious people simply believe what they were raised to believe. So who believes more---the person who has made a conscious choice, or the person who just does what they were expected to do?

As the head of the Church of the Mouse and the Disco Ball, you have my complete permission, should any of you get locked up, to claim you're a member of the faith and must be indulged whatever dietary restrictions you feel are necessary.