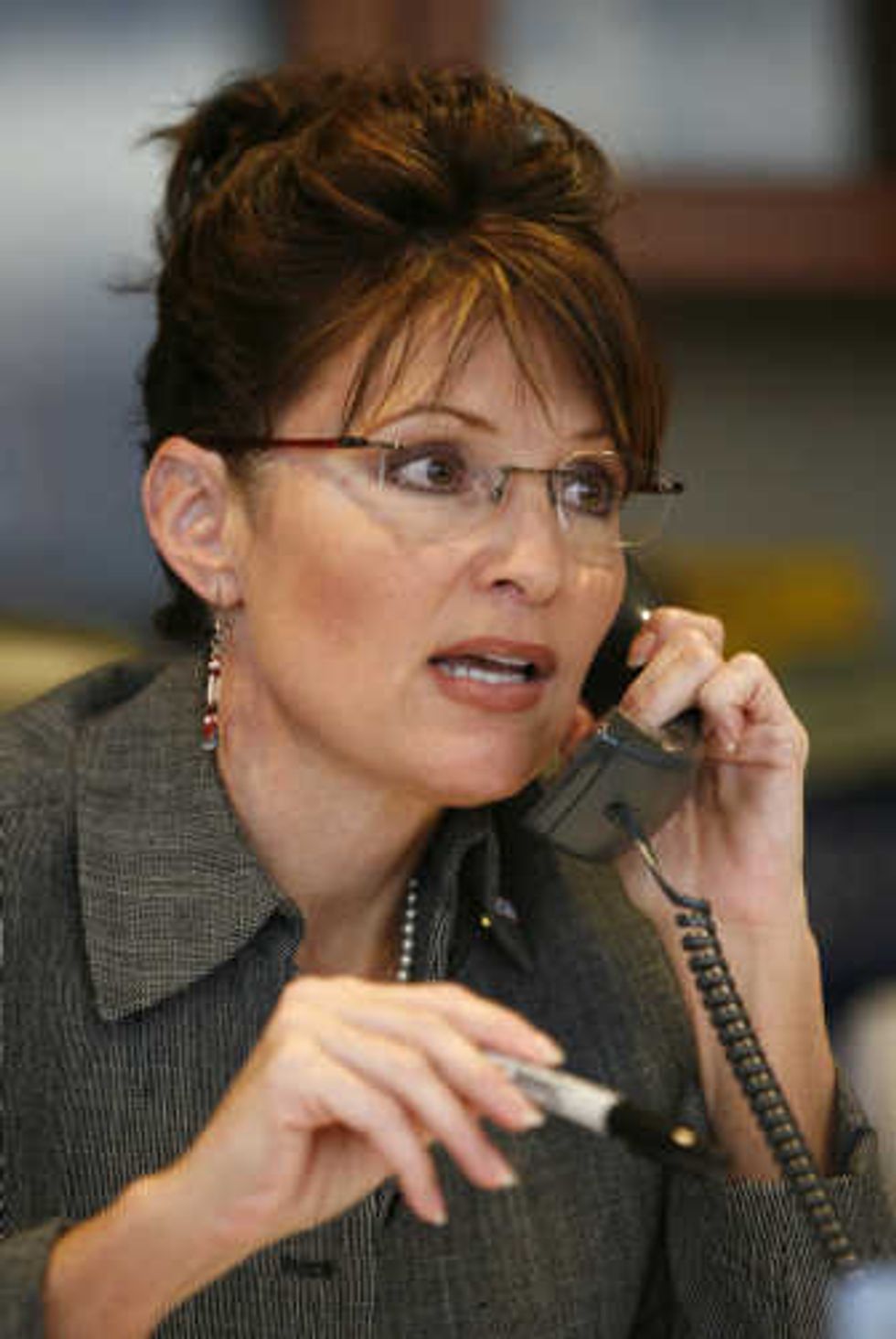 Dave Weigel's suggestion for a Palin tweet index is clever and sadly on target. It is true that the number of words exhausted on every little tweet and flutter from her has gotten out of control. I suppose you could say this post is an example. But, what I realized his post was that while the main reason that Palin probably loves the brevity of Twitter is that coming up with more than 140 characters can take her all damn day, there's also something else going on in her favor. Either she stumbled upon this by accident and is working it (the likeliest explanation), or she's an evil genius. Either way, it's working. I realized that the brevity of Twitter makes it easier for Sarah Palin to be a cipher for the various strains of wingnut out there.

The example Dave whips out demonstrates this perfectly. It all started when Tammy Bruce, whose racism outweighs her pro-gay concerns enough to drive her into the Republican party, tweeted:

But this hypocrisy is just truly too much. Enuf already--the more someone complains about the homos the more we should look under their bed.

It was in response to this scandal. I'd be curious to see if you guys can get to the tweet, since I'm not authorized to see it, which may mean it's closed off to the public now or that Tammy Bruce blocked me from seeing it after I made fun of her for having shit for brains, the proof of which will become evident soon.

Sarah Palin retweeted this, in an action that seemed incredibly mysterious to anyone not familiar with the Palin Corollary of Occam's Razor, which is, "If stupidity is a plausible explanation for her choice, it's the likeliest explanation." And indeed, you can see how Palin retweeted this out of sheer dumbheadedness. Without knowing that Bruce is a lesbian or much about the context, with a side dose of not reading it too closely, it's possible that she just saw the word "homos", thought it was a gay joke, and thought to retweet it.

But Bruce has really worked her ass off to interpret this retweeting as some sort of evidence that Bible-thumping Sarah Palin is a secret Friend of the Gays.

When it comes to Sarah Palin’s position on DADT, I have never asked her about it and she has never spoken to me about it–but I assess her as a Conservative with Libertarian influence. Both her husband and son are Independents, with Mr. Palin serving as his wife’s primary adviser. I will remind people of things already in the public realm about the governor–she refused to veto partner benefits legislation as governor of Alaska and is a firm believer in fairness and “live and let live.” She is not a Culture Warrior, however. She is, which should be apparent by her Facebook postings and opinion pieces, a Policy Wonk. She is also, which is clearly evident, a charismatic leader who remains grounded by her character, faith and family.

I'm sorry, but someone who makes eating cookies vs. eating vegetables an occasion for culture war is a dyed-in-the-wool culture warrior, and have I mentioned the word "abortion" yet? The only reason that Todd Palin isn't a Republican is because he has aligned himself with parties that see the Republicans as too left wing, and he's thrown in with the Alaska Independence Party, an offshoot of the Constitution Party that wishes to turn America into a theocracy.

This is how they feel about gay people:

The law of our Creator defines marriage as the union between one man and one woman. The marriage covenant is the foundation of the family, and the family is fundamental in the maintenance of a stable, healthy and prosperous social order. No government may legitimately authorize or define marriage or family relations contrary to what God has instituted. We are opposed to amending the U.S. Constitution for the purpose of defining marriage.

We reject the notion that sexual offenders are deserving of legal favor or special protection, and affirm the rights of states and localities to proscribe offensive sexual behavior. We oppose all efforts to impose a new sexual legal order through the federal court system. We stand against so-called "sexual orientation" and "hate crime" statutes that attempt to legitimize inappropriate sexual behavior and to stifle public resistance to its expression. We oppose government funding of "partner" benefits for unmarried individuals. Finally, we oppose any legal recognition of homosexual unions.

Basically, no gay marriage, and really, the fundamentalist Christian church should have all power to say who is and isn't married.

Of course, Bruce also thinks Palin is a policy wonk, so she's far off into fantasy land. Palin also took a couple of swipes at gay people in her latest book "America by Heart".

Anyway, the point. And that is Palin says something cryptic on Twitter, almost surely due to straight up dumbassery. But because it's cryptic, her fans can read whatever fool thing they want into it. She's all things to all wingnuts. No wonder she's so popular.