The Footwear of Tyranny 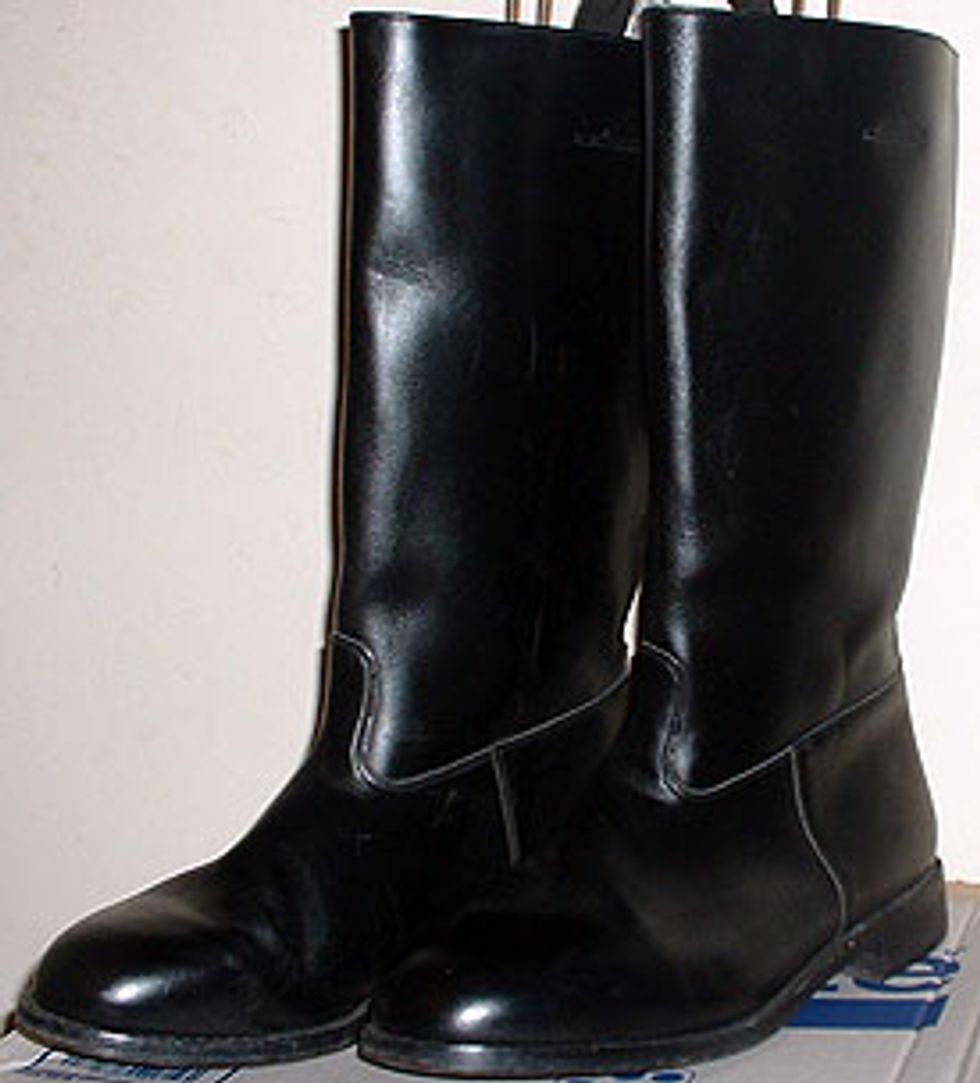 Update: For a more direct take on this whole issue of gun control, check out my latest at the Guardian's Comment Is Free. But that isn't to say there isn't humor. Wingnuts and their gun obsession always have a darkly comic value.

Every time there's some horrible gun violence that catches the nation's attention, there's an inevitable call for gun control, and then the inevitable hysterical reaction from wingnuts who think that their penises will be taken away the second a mentally disturbed child molester on a terrorist watch list is prevented from buying a machine gun at a gun show. And in these hysterics, there's one word that's used more than any other: "jackboot". Jackboots are, according to 99.9% of hysterical gun nuts, the most terrifying item humans have ever produced. Jackboots are the weapons of choice of thugs kicking down your doors, looking to take your guns. Liberals are usually portrayed as pacifist wimps by the right, but on this issue, suddenly we're an army of fascists wielding this most terrifying of weapons, sturdy footwear.

Of course, the reason that wingnuts like to reference jackboots is that these were the preferred boots of the German military, before and during the Nazi era. And wingnuts love nothing more than comparing criticisms of them and reasonable safety policy to the genocidal policies of Nazis. Seriously, this "blood libel" and "pogrom" thing is just the next step after decades of "jackbooted thug" being second only to "welfare queen" in the wingnut cliche handbook. This tendency is offensive to liberals, people with commonsense, Jews, anyone who was targeted by actual Nazis, the victims of gun crime, the soldiers who won WWII, and rationality itself, but it's also really unfair to boots. After all, the difference between the evil weapon of war called the "jackboot" and other, sturdy footwear suitable for heavy duty work, such as fighting in the military, is paper thin to non-existent.

I looked up the term "jackboot" online, and after wading through a bunch of right wing propaganda and historical wankery that is so specific that it's not enlightening, I finally concluded that jackboots are basically just a really sturdy knee-high boot, probably one that is somewhat weather-proof so that you can march through mud and whatnot. Steel-toes are probably involved in many of these kinds of boots, which do make them good for kicking the shit out of people. Still, I find jackboots as weapons less terrifying than semiautomatic assault guns with extended magazines, machine guns, and rocket-propelled grenade launchers.

But, in the spirit of compromise and Jon Stewart's metaphor of everyone taking turns getting on the freeway, I'm willing to consider a compromise where, in exchange for controlling what we liberals find terrifying (high tech weaponry that can kill a lot of people in short periods of time), we will allow the control of boots that could be used to kick you in the head really hard. Of course, just like with guns, an all-out ban of the entire boot family is and should be off the table. Seriously, since moving to a place that has for real winter and where you have to walk everywhere, you would have to pry my boots out of dead, cold hands. Plus, a lot of boots are really far away from "jack" on the scale of boots-that-look-scary. So, I thought I'd go through the collection of boots in my house (which, because of aforementioned cold and walking weenie-ness, is a large collection) and rate them on the "jackboot" scale, to get a better picture of what kind of boot control would be necessary to stave off tyranny.

Also, it gives me a chance to play with Instagram, which is not yet implicated as a threat to liberty from liberal fascists. 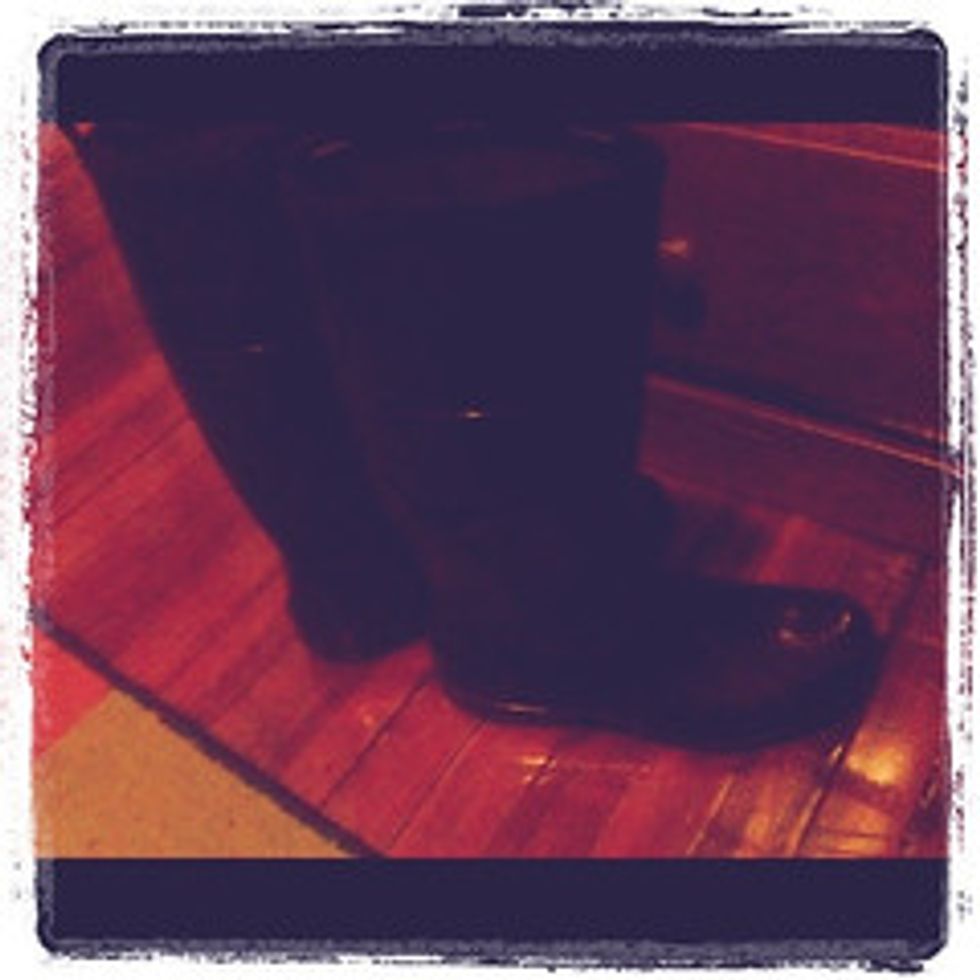 Freedom-loving qualities: Kind of unwieldy, made of rubber and not leather, associated mostly with girls wearing skinny jeans or leggings in an effort to make these look more fashionable than they are. 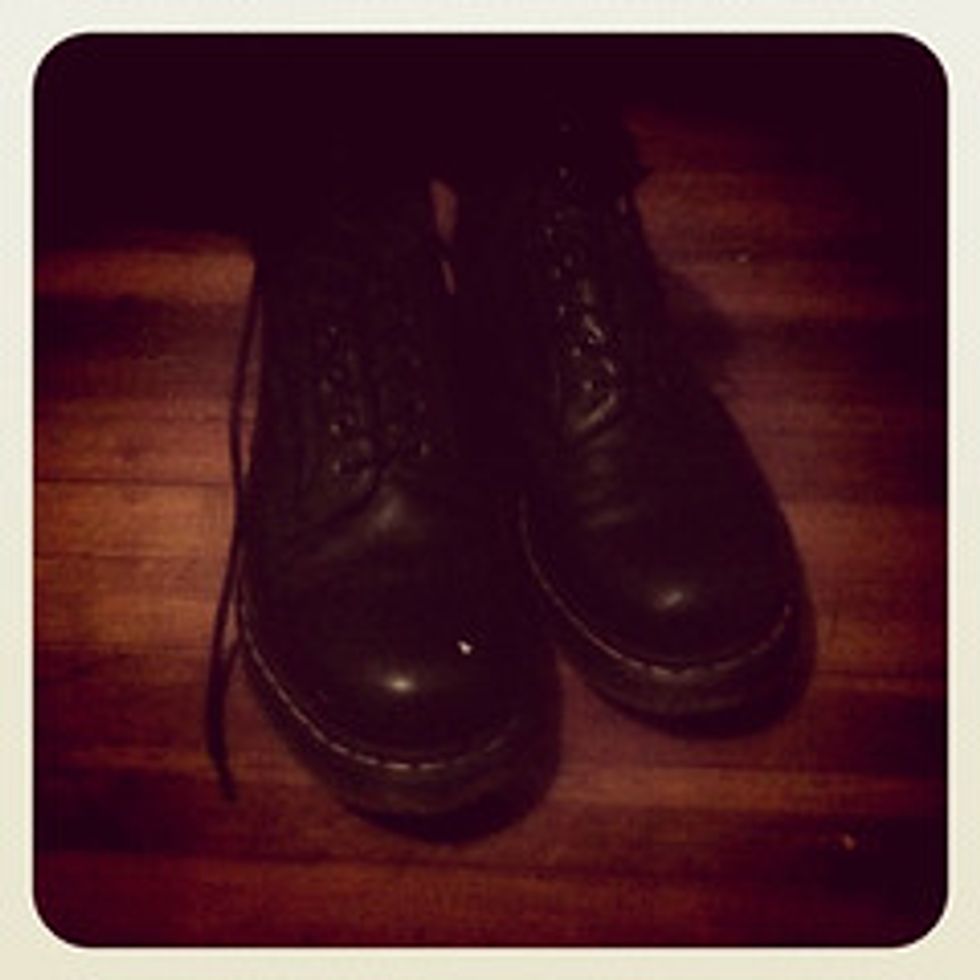 Jackboot qualities: While not steel-toed, look like they could be; sturdy, European, thick soles, very manly with its hardcore punk and work boot associations. 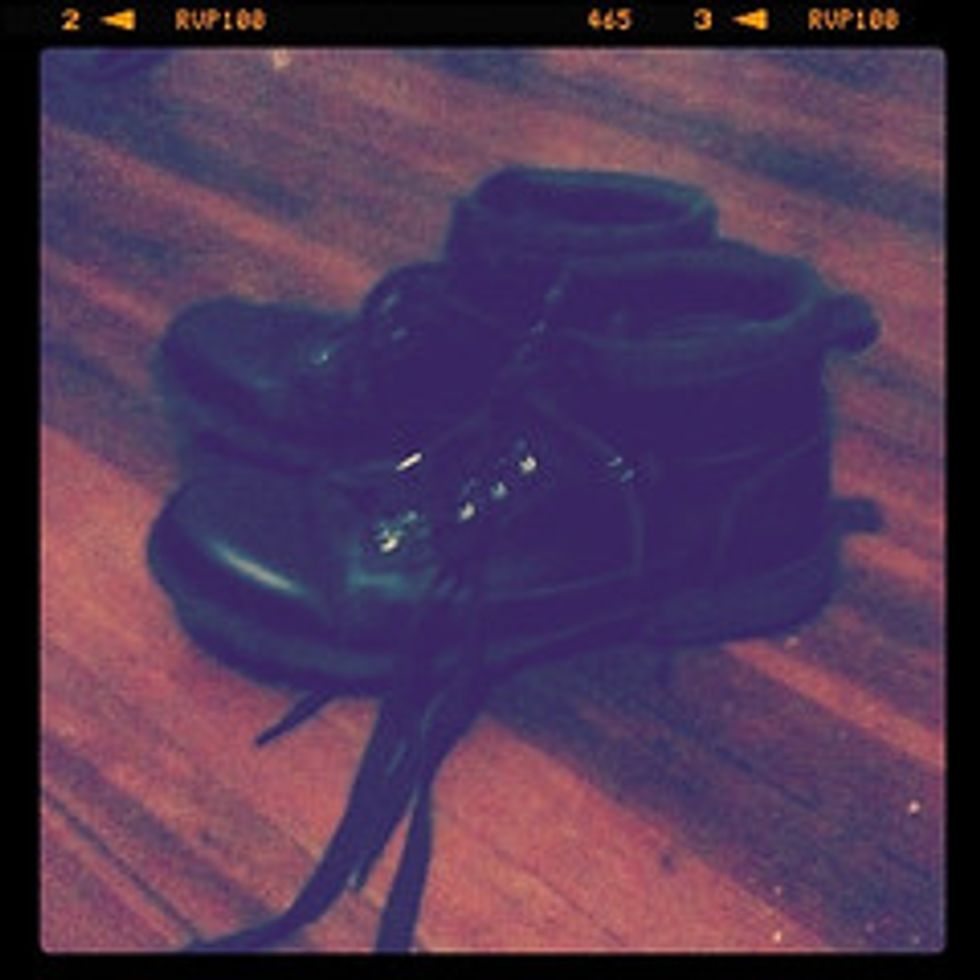 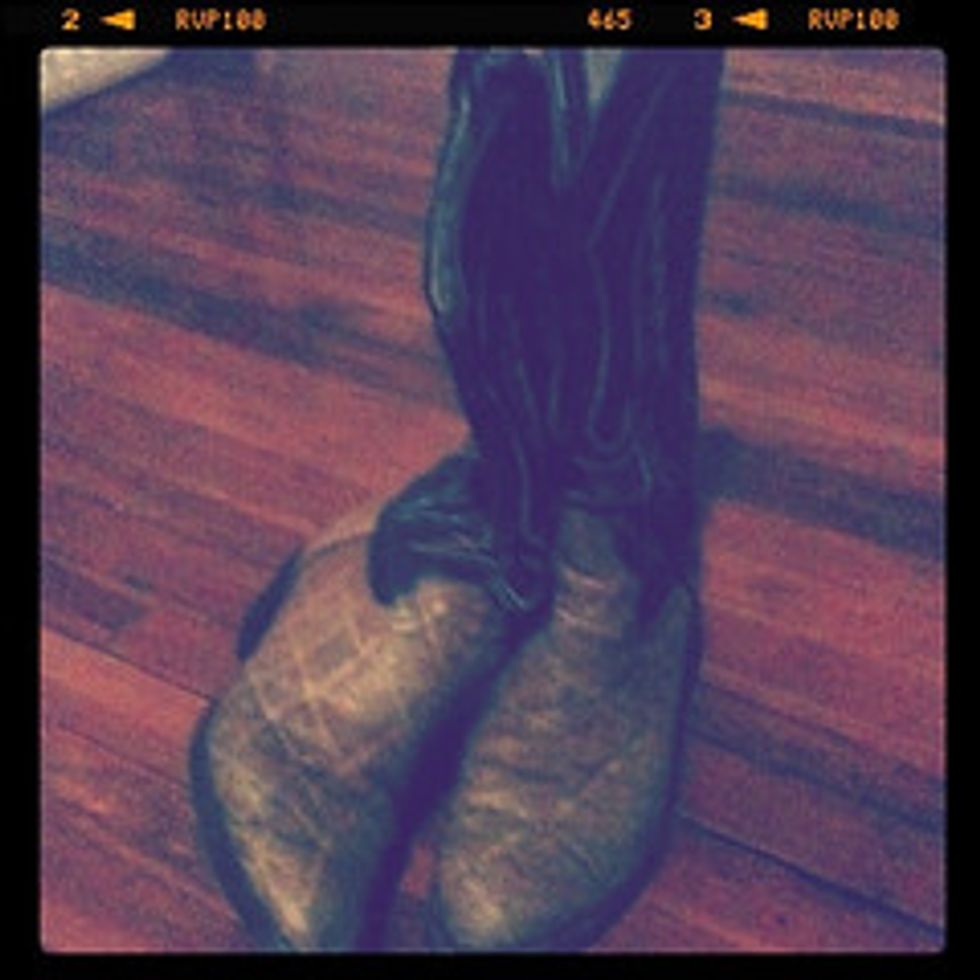 Jackboot qualities: Well, they're a little more than ankle high.

Freedom-loving qualities: These are red-blooded hyper-patriotic boots that were actually purchased in Texas and are, I do believe, Tony Lamas. These boots are something I may have to hide from Sarah Palin, because she will totally steal them so she can wear them on the cover of her next stupid book no one actually bothers to read. 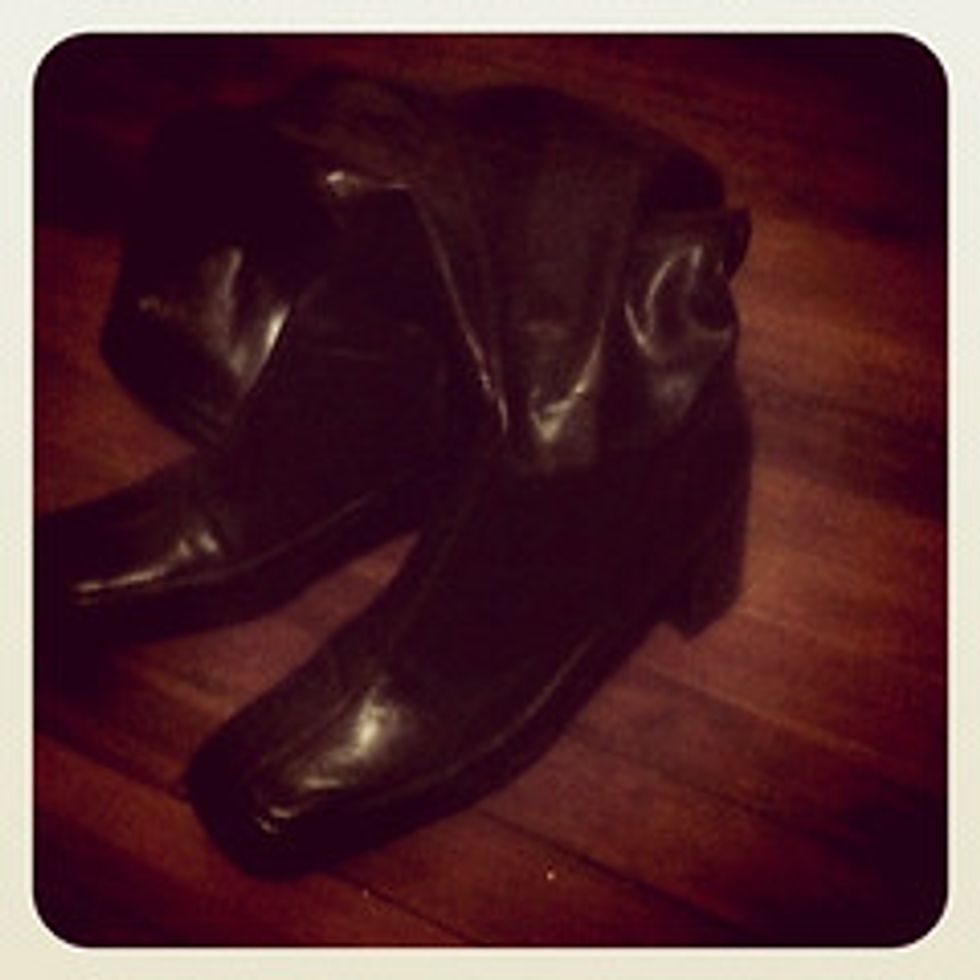 Jackboot qualities: Knee-high, leather. Who are we kidding? These are soft leather boots that I wear mostly with plaid miniskirts and tights. They're about as girly as shoes of mine get.

Freedom-loving qualites: Soft, deliberately feminine, high-heeled (though not over the top), worn exclusively with skirts.

Jackboot rating: 2.0, but only because this sort of boot is ubiquitous in the capital of liberal fascism, New York City. 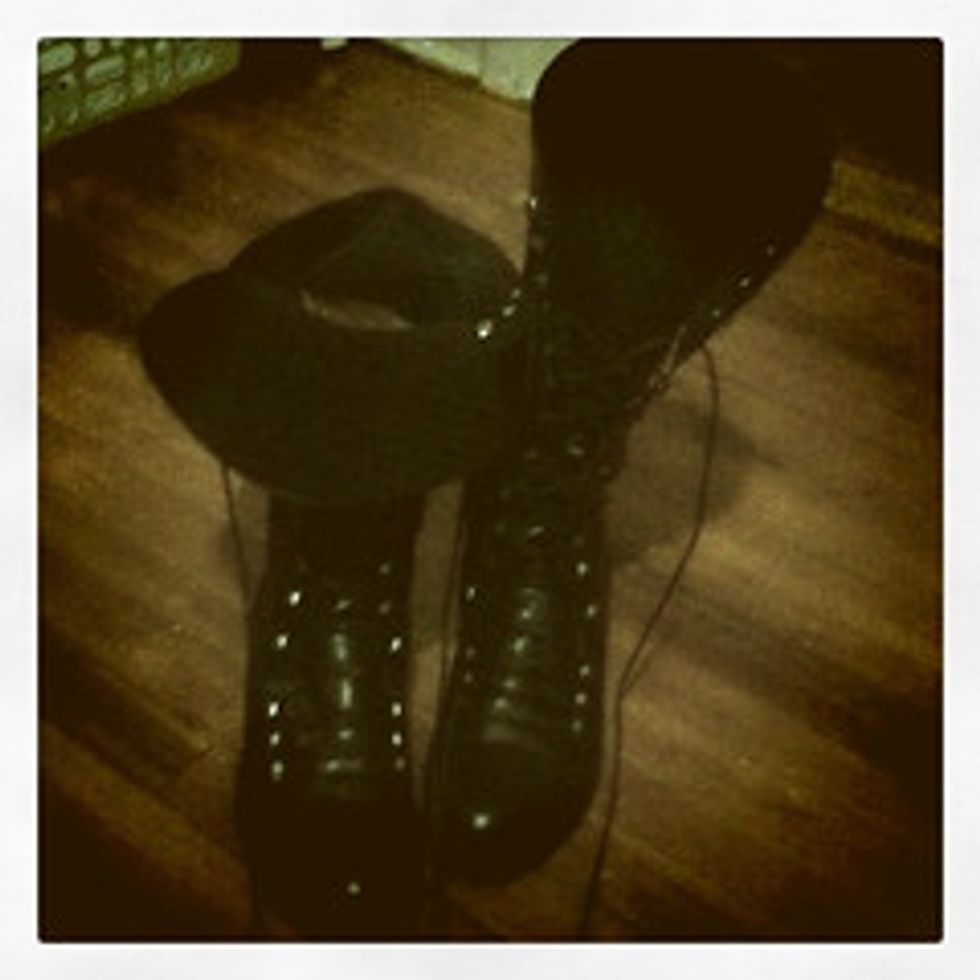 Jackboot qualities: Knee-high, practical, kind of fierce-looking, albeit more in a glam rock way than a head-kicking thug way.

Freedom-loving qualities: Not really made for trudging through mud so much as just being warm and fashionable. Not really the sort of thing you'd pick to kick someone's head in. 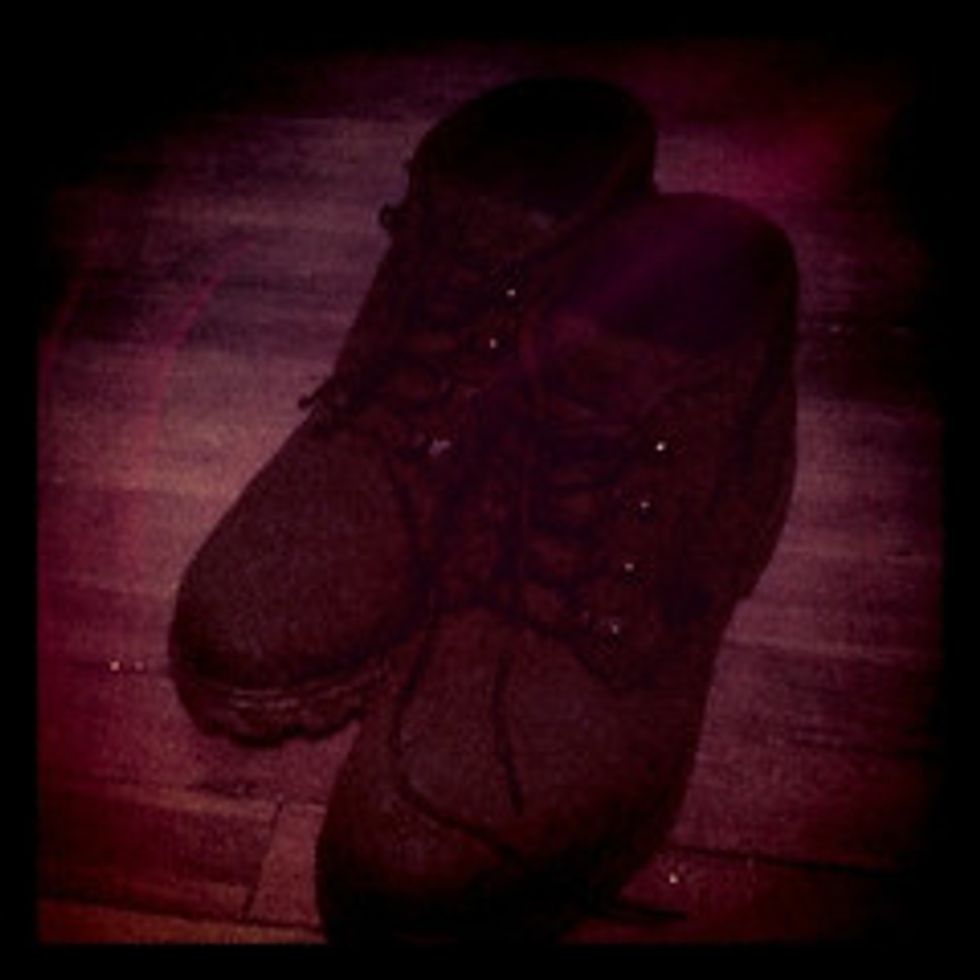 Freedom-loving qualities: Ankle-high, not really glossy enough in the leather department, brown, more associated with hiking and being warm than oppressing the people. 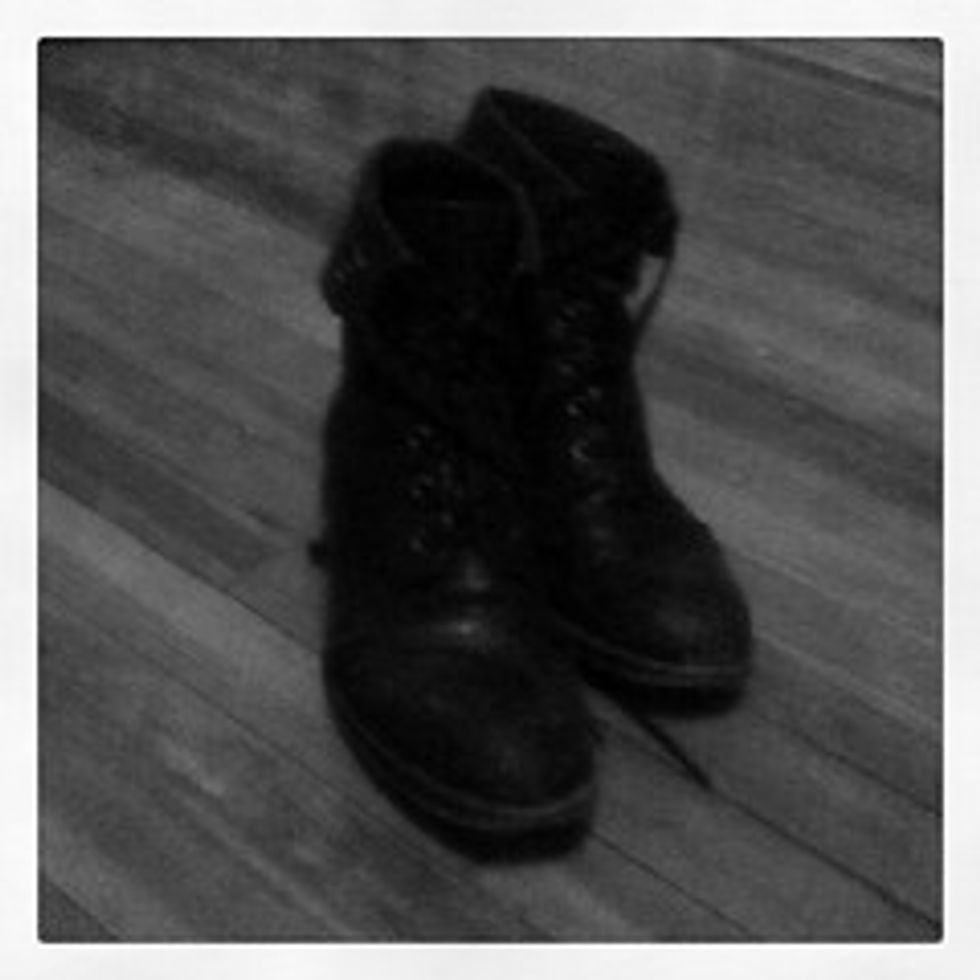 Freedom-loving qualities: Ankle-high, kind of a lot of frippery with the fold over thing going on, a whiff of vintage dress-wearing hipster quality to them. 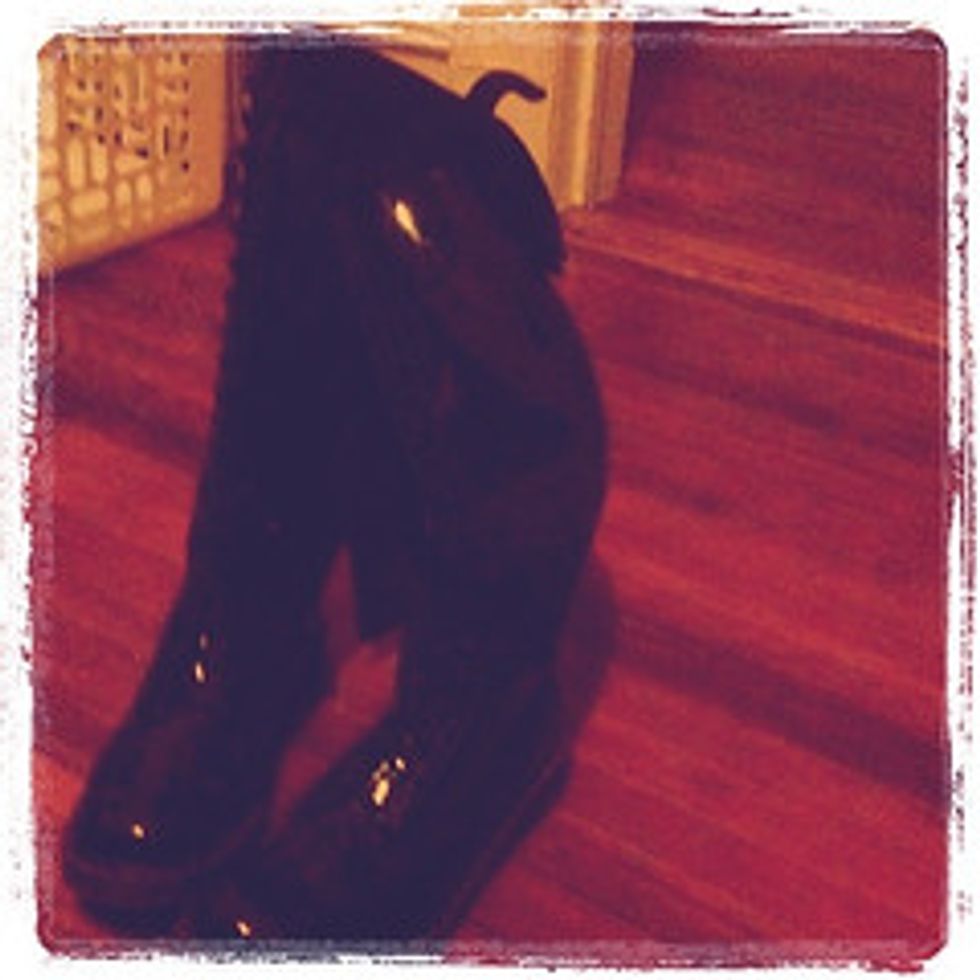 Jackboot qualities: Sturdy, reasonably weather-proof, thick sole, would definitely be the shoe of choice for kicking in a door, knee-high, eye-catching with the shiny. These boots were not purchased with the intention of scaring anyone, but I suppose in the right paranoid light, they'd be what you'd think of as a jackboot.

Freedom-loving qualities: Well, they are patent leather. That's a little hard to overlook, but can be done if you squint right.

So, there you go. I don't have any direct policy prescriptions with this new information, but I figured by creating this rating system, we were off to a good start. What kind of qualities should call a boot into question for banning, or at least heavy regulation? It seems weight, sturdiness, height, color, and cultural identifiers are all aspects that should be taken into consideration. With this rating system, we also have a bargaining chip with right wing gun nuts. They let go of selling semiautomatic assault weapons, and perhaps we'll give up especially sturdy hiking boots.