Yes, Scalia, there was feminism in the 19th century 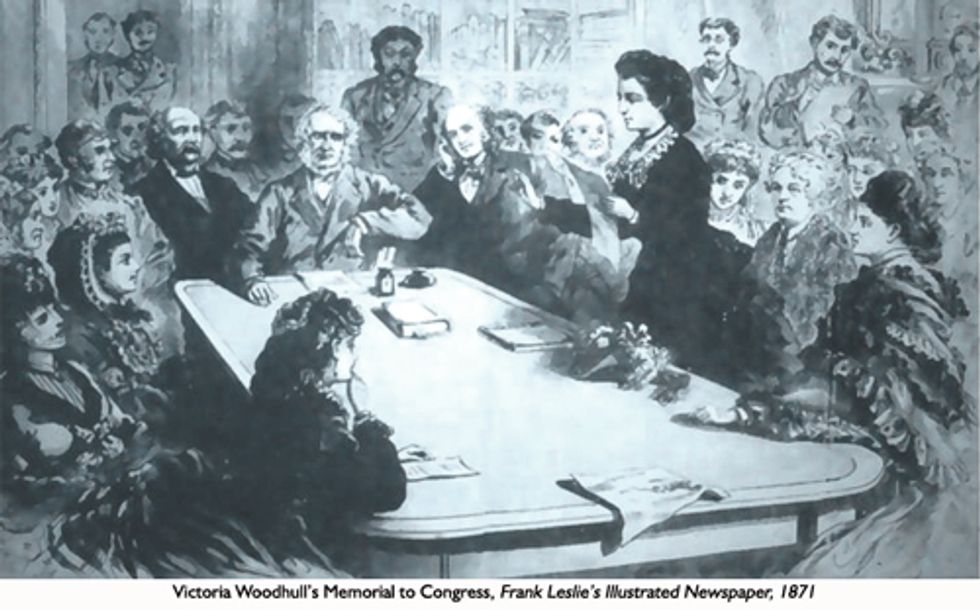 Scalia has conclusively demonstrated that "originalism" just means "projecting my desires onto the original writers of the Constitution, so I can blame them instead of myself for my bigotry". Here's the quote in question, where he dismissed the idea that the 14th amendment prevents gender discrimination:

I like his sarcasm there, which really adds to the sense that Scalia's implying that this women's equality thing is just a fad that will pass soon enough. At the link above, and at this one, Scott Lemieux conclusively demonstrates that Scalia's ability to read the minds of the Constitution authors only comes into play when what he's channeling from them is what he already believes. "Originalism" is functionally a religion, where the Constitution is a holy document and the interpretation is done by priest-judges who get to make shit up as they go along, instead of thoughtful jurisprudence.

Instead of reading the Constitution out loud in the House, the Republicans should do it in Scalia's office, because he seems to have no idea what the actual text of the 14th amendment is.

Emphasis mine. Instead of trying to rule by holding seances to ascertain what the folks who wrote this meant by it, Scalia should be reading the text and asking some straightforward questions, especilly about who he considers a "person". Are women considered "persons" nowadays under the law? I'd say yes, even though there's constant assault on female personhood by the anti-choice movement, and the justice system fails to provide equal protection all the time by not enforcing laws against rape and domestic violence as much as they should. Matt Yglesias has more on this.

It’s probably true that in the subjective understanding of mid-19th century lawmakers “nor deny to any person within its jurisdiction the equal protection of the laws” didn’t contradict legal discrimination against women. That’s because in some sense they didn’t think women were “persons” the same way men are. By the same token, when the framers authorized congress “[t]o establish Post Offices and Post Roads” they obviously didn’t intend, as a matter of subjective understanding, to authorize automatic postage stamp dispensers or bridges strong enough to carry trucks. But we understand today that a well-run post office does in fact include stamp machines, computers, and all sorts of other technology that wasn’t inside the heads of 18th century constitution writers.

Of course, it's always possible---likely, even---that Scalia thinks this "women are people" thing will turn around any day now, and all our rights will be stripped away and we'll be returned to chattel status. I wonder how the women he works with feel about this.

But Matt's concession to the notion that folks in 1868, when the 14th amendment was ratified, couldn't conceive of the concept of women as persons is actually wrong. On the surface, it makes a rough sort of sense to believe that was the belief back then, because the time seems so foreign and far away to us now. But it does well to remember that the Victorian era was not the medieval era, and Western civilization was already centuries into the growth of the Enlightenment/secular humanism, which is the basis of feminism. Matt walked it back almost immediately, posting shortly after that some evidence that some of the people who wrote the 14th amendment did, in fact, think it had the implication of women's equality.

Rep. Benjamin Butler was present at the creation, and he believed the 14th Am. had the potential to guarantee equal protection for female citizens. Same with Chief Justice Salmon Chase, who affirmed a woman’s equal right to practice law in his 1873 dissent in Bradwell v. Illinois. Chase was not only closer than his fellow justices to the men who wrote the Amendment, he was much more deeply involved in the debates of the Reconstruction period.

As Matt notes, Scalia said "no one" would have thought that women were equal in 1868. But a short 7 years later, suffrage was denied to women in a decision that nonetheless held that the 14th amendment applied to women.

The larger implication of Scalia's comment, beyond just the 14th amendment, was that 1860s America was a fantasyland for misogynists, where the notion that women were subhuman was held by consensus and not especially controversial. This is simply false. Feminism had existed not just decades before that, when the Seneca Falls convention kicked off the suffrage movement. Mary Wollstonecraft's A Vindication of the Rights of Women had been published in 1792, after all. The concept of women's equality had been around for a long time, and by the time the 14th amendment came around, the idea that women could be equal was widespread enough to be a kitchen table debate. Feminism got a big boost from abolitionism, and I'd say that by 1868, abolition would have been far from a fringe idea. It might have even had an impact on the 14th amendment, though I'd like to hear Scalia try to claim otherwise.

And let's face it; if they wanted to exclude women, they could have used the word "men" instead of "persons" in the 14th amendment. That they didn't in an environment where feminism was a growing political movement should hardly be read as a ringing endorsement of keeping women as chattel in perpetuity.

Scalia's "I can read the minds of people in the past without knowing my history" act is getting really old. Can we just stop pretending he's some great legal mind? He doesn't even know how to read the word "persons".