I usually do a lunch involving a homemade veggie burger, homemade bread, and roasted beets and some kind of side dish---all made ahead of time so that it takes no real time to make it all. I thought it might be nice to do something different with the beets than roast them this week. So, while I was making the veggie burgers (which honestly takes like 10 minutes of real work for a week’s worth of lunches), I peeled a big pile of beets that were $1.50 a pound at the farmer’s market. Then I put them in the food processor, on the mandolin setting, and made a bunch of really thin slices. I then put them in the stock pot with 1/3 strong cider vinegar, 2/3 water, some mustard, some salt, and some cinnamon. Boiled all that, put it in a bowl, and refrigerated it. Ate it to dress sandwiches along with some horseradish pickles I bought at the farmer’s market.

A word of warning if you do this: the smell is really strong when you pour out the beets. My eyes totally watered. Only do if you really like pickled foods.

The plus side of this experiment is pickled beets were way easier to work with than roasted beets. Whenever I wanted beets on a sandwich or with some lentils and yogurt for breakfast, I just scooped some out of the bowl they were soaking in. The downside was that they taste good, but just not as good as roasted beets. Plus, they amazingly take up more room in the fridge. And you have to pay for the apple cider vinegar, which isn't that cheap.

Apples, red potatoes and carnival squash were super cheap at the farmer’s market, so I made a dinner with those. The squash I roasted, and then made into a soup with a tweaked and vegetarian version of this recipe, and I pureed it with my immersion blender. I cut up the potatoes and roasted them with salt, pepper, and herbs.

For the apples, I had to basically make it up. I took some bulgur wheat from the pantry, cooked up a cup of it according to the box instructions, and added some nutmeg and cinnamon, and some apple cider vinegar. When it was cooked, I mixed in some cut and peeled apples and a little lemon juice.

I meant to do this last week, but I’m going to start noting if various meals are vegan or vegetarian. I’m not a vegan, but when you start cooking in a more sustainable, whole grains-oriented way, you end up making a lot of stuff vegan by default. And this meal was mostly vegan, though I did put yogurt in the soup as a garnish. But by no means do you have to. 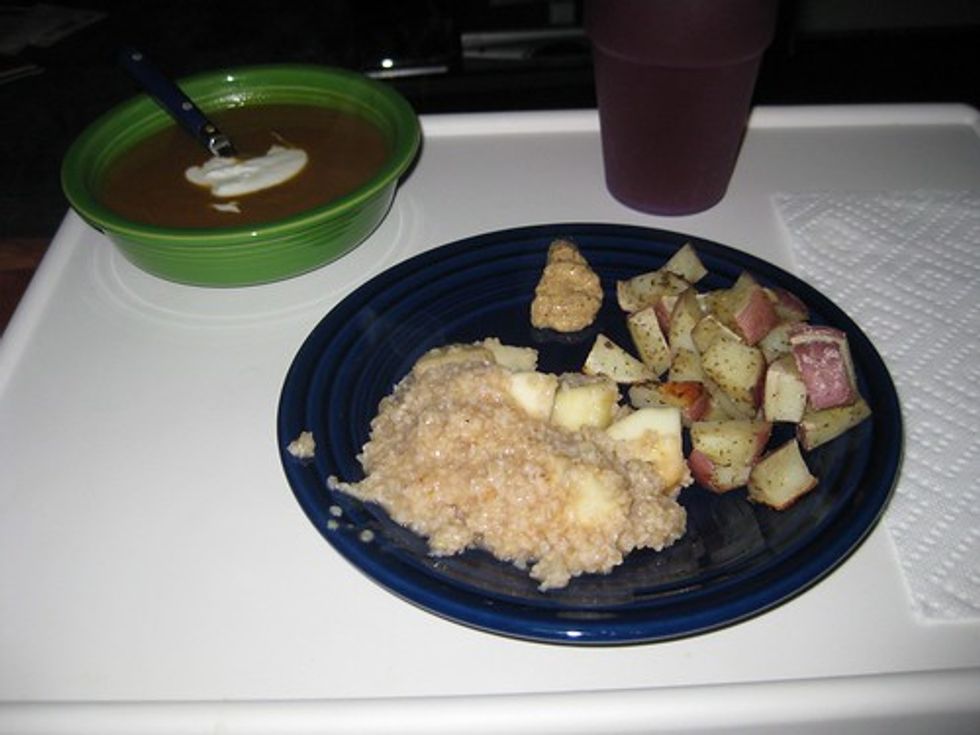 I roasted some carrots from the farmer’s market with scallions, and also some asparagus, which was on sale at the grocery store. Added ginger to the carrots, but otherwise it was with just salt and pepper.

Then took what was left of some chickpeas I’d cooked, put them in the food processor with bread crumbs, garlic, scallions, and some cooked frozen vegetable pack that was on sale. Added eggs and a little cornstarch until it had a consistency you could use to make patties. Made patties with it, which I then fried, so make fritters. Served it with pickled beets and yogurt. Served the roasted vegetables with balsamic vinaigrette.

This meal was vegetarian, because of the eggs. But I do try to buy my eggs from a free range farm at the farmer's market, because eggs from the grocery store are raised in unbearably cruel conditions. And aren't as healthy for you. 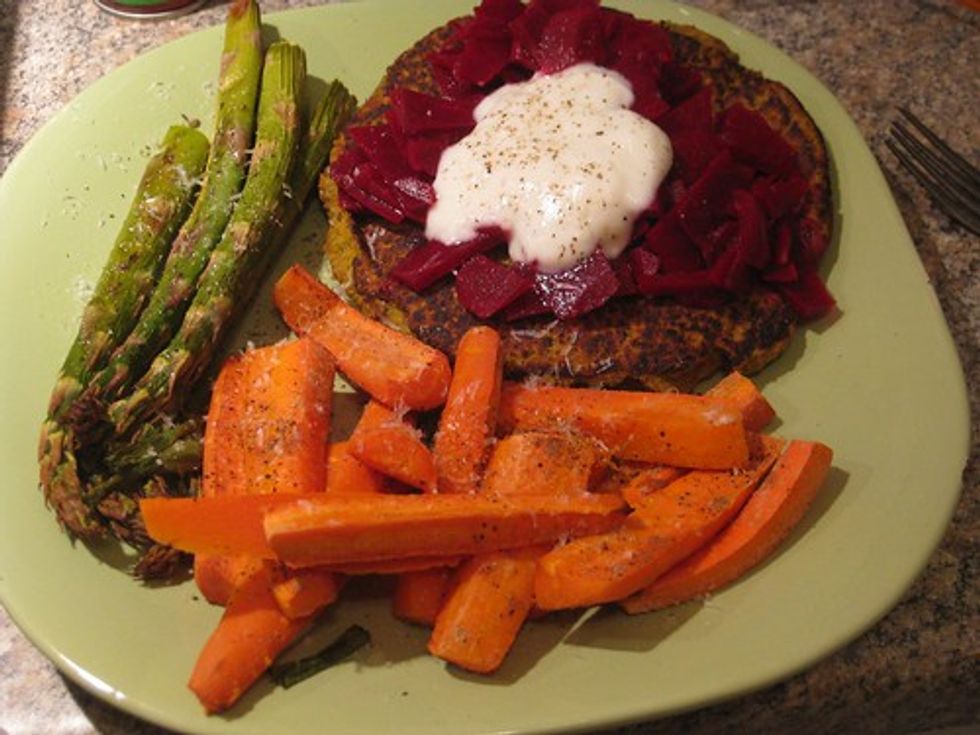 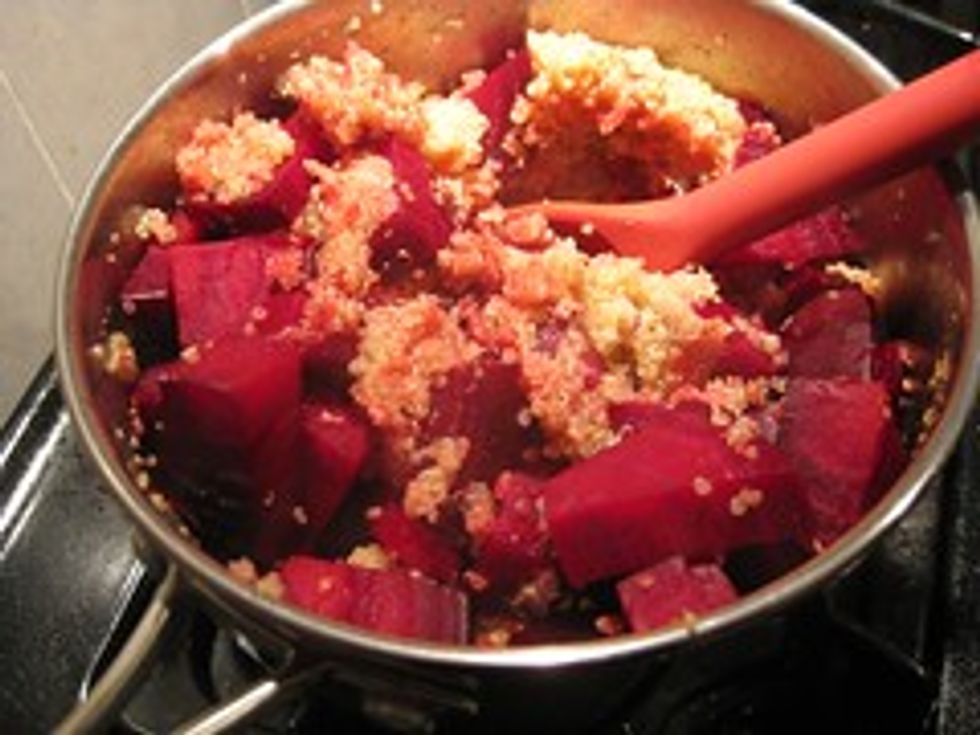 I roasted a couple beets, chopped them up, and put it in some quinoa, which I think mixed up with a sauce made with lemon juice, yogurt, garlic, cumin, and oregano.

By the way, I highly recommend roasted beets + grains as a dish when you’re cooking for company. Roasted beets look as awesome as they taste, and it’s an easy way to make an attractive and impressive dish. 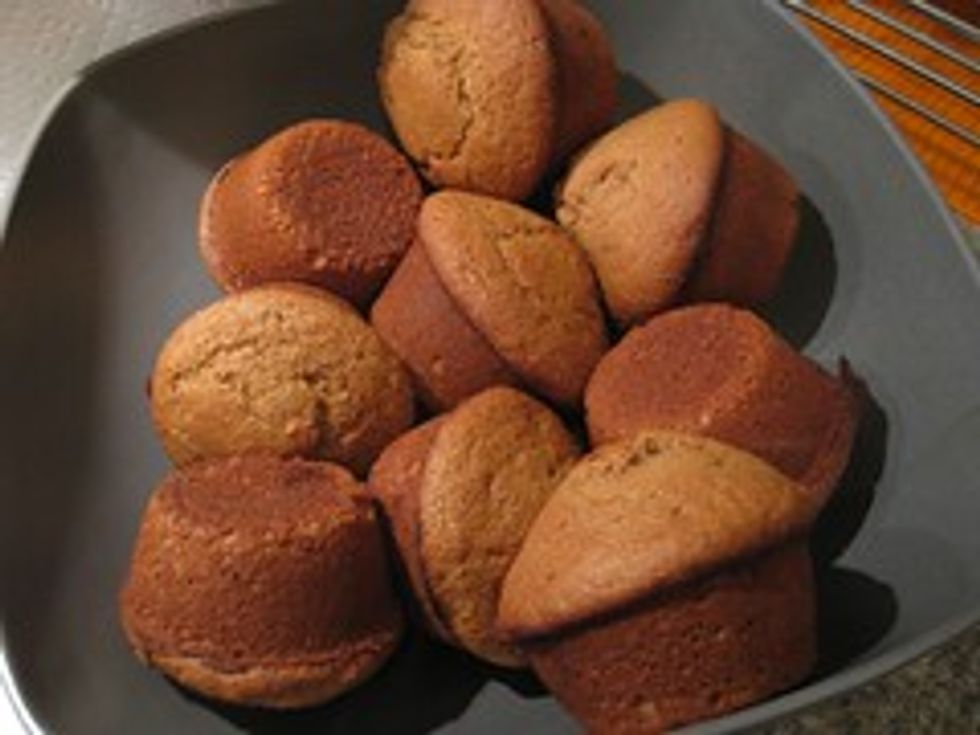 I had a bunch more apples than I knew what to do with from the farmer’s market, so I made applesauce with them to keep them from going bad. I used a cup of that applesauce and made muffins with this recipe. Still had a ton left, and am going to experiment with making a pasta with it.

Frozen edamame was on sale at the grocery store, so I boiled it, and then served it with salt, pepper, and soy sauce. By the way, I bought these oversized Asian-style vegetable bowls on sale, and they were the greatest purchase ever. They’re perfect if you, like me, tend to eat giant piles of vegetables with some grains. But I also found they made quick-and-easy serving dishes.

Totally blanked on taking a final picture of it, sorry. The muffins were excellent and disappeared with a speed that was almost alarming.