Is it worth it to argue down right wing myths? 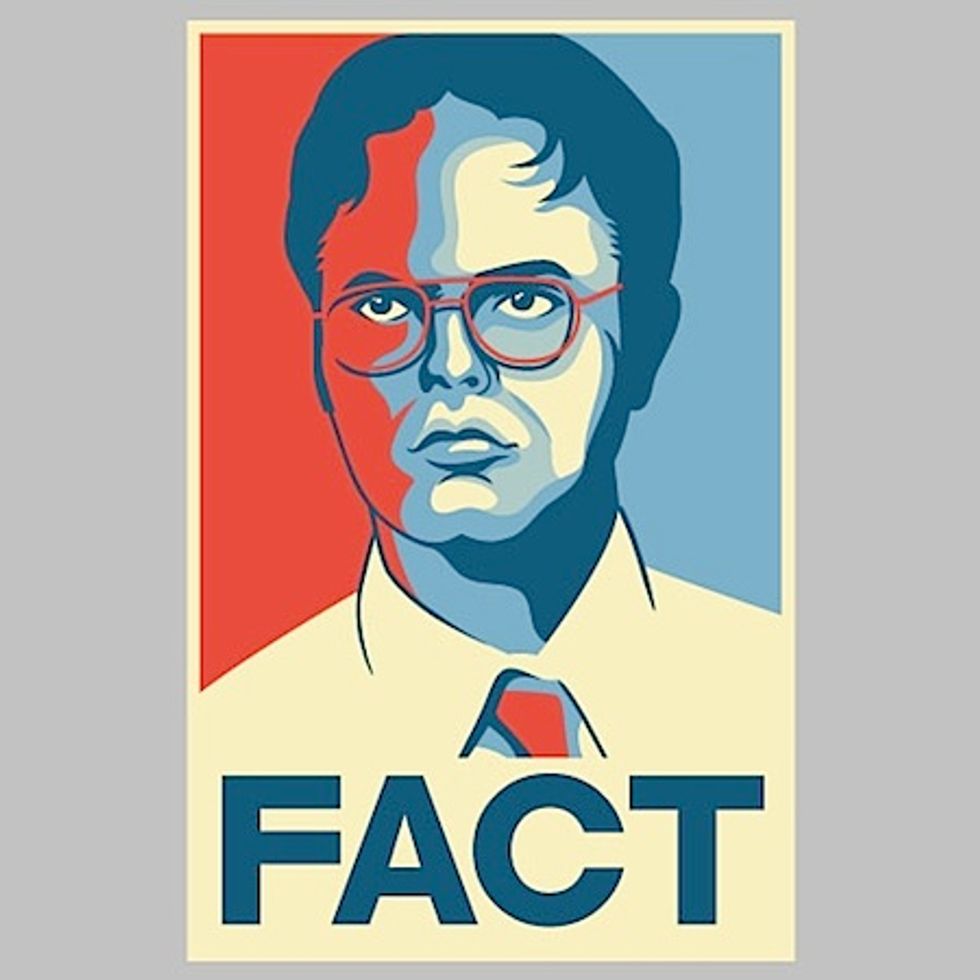 This happens a lot, especially lately, when I write about right wing arguments and how to counter them, as I did this morning. Invariably, you get a form of nay-saying. "I'm not actually going to change his mind," say the nay-sayers, "So why bother?" I don't think most people nay-say to be pains in the ass or to feel superior, at least not in this case. I get that there's burn out. I burn out a lot! I don't argue with every fool thing I see someone say on Facebook. The idea of argument, in its Platonic form, is to get to The Truth, and to get everyone on the same page. In reality, people believe what they want to believe, and rationalize it. So, how can you "win" by taking away their rationalizations? We all know that when you do that, what usually happens is not someone saying, "You know, you're right! I was wrong. I've completely changed my mind." They usually keep trying to counter you, maybe try to get the last word in and think that counts as winning, or, if you completely decimate their argument, they sputter at you for being a meanie bear, or say something asinine like, "We'll just have to agree to disagree."*

1) Doing so for an audience of undecided people. As I noted in the comments, this can take many forms, and how you win the argument should depend on the form. For instance, if you're forwarded an urban myth, it's probably unwise to get into a values argument that involves hitting "Reply All", because then people will just think you're an asshole. However, you can hit "Reply All" and put in a link that explains the facts. If someone on the list isn't really a fan or doesn't know what to think of these forwards, this might actually push them into your camp. Other places were arguments for undecideds happen: Group situations, Twitter, Facebook, comment threads at blogs, etc. You don't often know who's listening. I've seen many people who were in a questioning mode learn from this.

2) Planting a seed. You may not change a mind right away by winning an argument, but if you can introduce enough cognitive dissonance, you can often get them to think a little more in the future. I've definitely seen complete about-faces on an issue months after someone lost the argument, and had to really think about it. I've also seen people moderate their views after losing an argument. Both are valuable. Cognitive dissonance is painful, but it fades over time, and in that time, coming around can and often does happen. Why do you think the polling has changed so much over the years on gay rights? Because people who were homophobic came around, bit by bit, a little at a time.

3) Getting someone off your back. This is not nothing. I know a lot of really incorrigible right wingers, and they get pleasure out of pushing the buttons of liberals. And they exploit the fact that liberals don't want to argue with them, because liberals fall into this trap of thinking that it's not worth it if you don't get to a mind-changing event. But I have managed to get plenty of conservatives to back the fuck off me because I figured out that as much as I don't like having my buttons pushed with bigoted or ignorant comments, they like even less being shown up in an argument. Reducing someone to sputtering is not fun for them, and will dramatically reduce the chances they'll provoke you again.

A word of warning about this one: You have to be willing to see it to the bitter end. You can't back out halfway, because they take that as a "win" and will come back for more. Either you go scorched earth and leave them with no arguments, or you don't play. Upsetting liberals is something conservatives think is fun, and so unless they're the one who is upset at the end of it, you will have lost even if your arguments were better. But if you really want someone off your back, this can be extremely effective.

4) Minimizing their influence on others. You may not have undecided people listening now, but there are potential undecideds in the future that your wingnut could influence with misinformation. And while you may not be able to change someone's mind about underlying values, you can often be very effective in scaring them away from saying things that you demonstrated were not true. People repeat urban legends because it feels good to do so. If a particular urban legend, however, mostly reminds them of the time you made them look foolish, they'll probably not repeat it. This reduces the chances they can, for lack of a better word, recruit with that particular story. You're taking tools out of the toolbox.

You saw this happen with Mike Huckabee, a glib liar who is nonetheless interested in preserving his reputation that he enjoys as the Not So Bad Wingnut. Huckabee went into a conservative space, and let his hair down and indulged in a little birtherism, claiming that Obama was raised in Kenya. This got called out, and now he's scrambling. Yes, he's lying as he scrambles, but here's what's important: He is very unlikely to go there again. He got really burned on this one. You can replicate this effect on all sorts of wingnuts.

Are any of these sure things or silver bullets? I do feel there's a tendency on the left to get sobby pants every time some one suggests a strategy that only works some of the time. Exceptions are brought up. The idea is pissed upon. Sure, shaming works in 50% of cases, but what about the other 50%?, we're asked. Dream killing and circular firing squads are endemic on the left.

But here's how I see it: 50% is better than nothing, and nothing is what you get if you don't engage at all. Sure, there are some liars out there who will not be shamed, shut up, or budged. There are people who probably have psychological problems that make them impervious to caring about what anyone thinks of them, like Andrew Breitbart or Glenn Beck. But most conservatives aren't monsters. (Those guys really are.) They are subject to the same concerns as everyone else: not looking like a fool, not being wrong all the time, not being considered a cheat and a liar. And these desires can be wielded by you for good.

Which is why I think that as tough and frustrating as it is, it's critical to keep doing the day in and day out work of calling bullshit. It may keep coming, but I do think we're at least limiting the quantities of it. If you disbelieve that, think of how angry someone like Bill O'Reilly gets when he's called out for lying. If he was impervious, he wouldn't care. Most conservatives are concerned that being called out limits their influence, and I think they are for a reason.

Obviously---well, I hope people read this and don't argue as if I didn't write it, but sigh---not every tactic applies to every situation, and not every situation is the same. Nor is it worth it to argue with every wingnutty thing you hear. Pick your battles. But these suggestions are just about giving a general idea of when taking this action could work and why. No one is saying don't pick your battles. No one.

*As I noted in comments, if I'm committed to an argument and someone whips that out, in my mind, things are just warming up. "Agree to disagree" is an empty thing to say. What are you actually agreeing on? A lot of the time, what is being debated requires concrete action, usually in the form of choosing policy preferences and voting for candidates who will enact them. Agreeing to disagree is an effective emotional strategy when the thing being argued about is unknowable and not really that important, like if you remember someone's eyes being blue but your spouse remembers them being green. But you can't agree to disagree about policy, not really. Eventually, one policy will have to win out over another. You can't agree to disagree if you're being forced to live under a law that you don't agree with. You don't agree!

I get into this a lot with anti-choicers, who use "agree to disagree" when they lose arguments a lot. I never let them get away with this. I cannot agree to a ban on abortion. I already agree that someone who personally opposes it should have a right not to have one. The only acceptable "agree to disagree" policy is one where abortion is legal and easily accessible, and each woman decides for herself what she believes. But as they want to force their beliefs on me by law, no, we do not agree to disagree, and when they say that term, they are therefore lying. The term really only means, "I can't win this argument, but I want the last word." I fail to see why someone gets to have that. If you want to cause a conservative an aneurysm, don't let them have this out. It's fun, under the right circumstances.