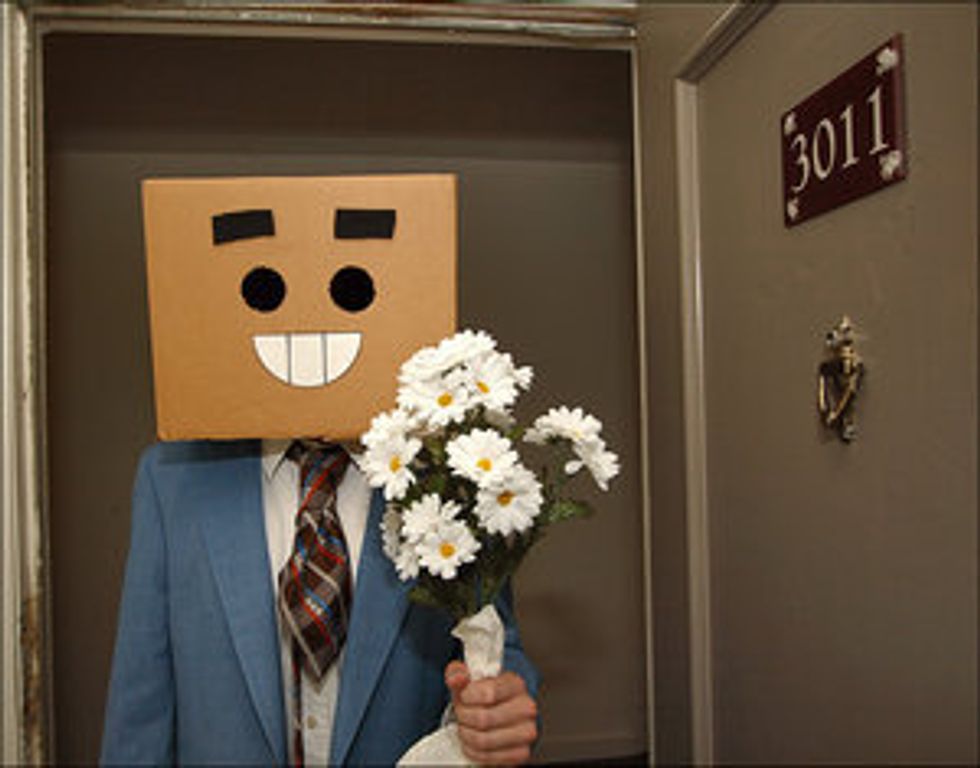 Via Hugo, I found this blog post that really is the epitome of Nice Guys®, and what makes them such megadouchebags. It starts off like this:

It’s difficult to write about the sexual isolation of sensitive men without falling back on clichés.

He immediately then goes into a long quote from a work of fiction that portrays a woman in a violently abusive relationship who also doesn't have sex with a man outside of her relationship. I submit to the jury this observation: If your reaction to hearing that a woman is in a relationship with a man who smacks her, kicks her, and calls her a "fat twat" is not to say, "Oh my god, that's terrible! I hope she gets help!" but instead to say, "Damn, there's one more woman whose pussy I'm not penetrating, woe is me," you are not a sensitive man. On the contrary, you are a self-absorbed narcissist! The lack of dick-dipping in your life should be taken not as evidence that women love assholes, but that they avoid at least one asshole---you---like the plague. You should be commending women for their asshole-detection skills in not dating you. Not that it's hard to detect your assholery, obviously---it's immediate from the second you viewed an abused woman not as a person who needs help and empathy, but some bitch who isn't giving you the vagina-cookies you earned by heroically refraining from beating her.

I could have stopped reading there and gone on my merry way, but I kept perversely going, which I suppose is evidence I'm one of those masochistic females that love getting shit on by men that Nice Guys® are always talking about.

Notice the slight-of-hand? The quote from The Brief Wondrous Life of Oscar Wao is about a violent abuser, but our blogger Miguel says that this is about "socially dominant" men. I submit to the jury that "socially dominant" is not the same thing as being abusive or even insensitive. After all, by his own measure, Miguel appears to be proof of this. He is on a pity trip because he's not socially dominant, but he is quite clearly an insensitive prick.

I would argue that it is true that women---and men---are quite often attracted to socially dominant, i.e. confident people. "Socially dominant" is a deliberately ambiguous term, and Miguel is choosing it so as to conflate a bunch of disparate personality traits, such as self-confidence and popularity with being aggressive or cruel. Which Miguel then proceeds to do, equating social dominance with "hyper-masculinity", and blaming women's biology. Without this assumption that confidence is always coupled with aggression, that popularity is always coupled with abusiveness, that straightforwardness equals pushiness, his entire argument falls apart. Take the concluding paragraph:

Even among men who are more “successful” sexually, I think a lot of young men who are sympathetic toward feminism feel they have to behave hypocritically – be a little bit pushy, arrogant, and entitled – in order to get laid. Indeed, the life course of many male feminists seems to entail a period of acting out – usually corresponding to that point in life during which most people explore their sexuality – followed by a period of contrition. It’s almost as though there’s an unspoken deal between feminist women and their male counterparts: “We’ll forgive you for your youthful sexual arrogance and entitlement, so long as you don’t mention that a lot of us were turned on by men’s youthful sexual arrogance and entitlement.” This is a lousy deal, and it’s unnecessary. Not only does it freeze out and sexually isolate a lot of shy young men, but it causes men who are otherwise sympathetic to feminism to conclude that, in the sexual realm, feminism isn’t telling the whole story.

Shyness doesn't make you nice. It just makes you Nice®. I have known many people who are shy assholes, who both hate other people and retreat from them, which actually makes a lot of sense.

I'm going to offer a counter-theory for Miguel. I believe what he has experienced is being rejected by women who prefer men who are self-confident, popular, and straightforward instead of men who lurk around giving you the stink eye because you haven't offered to suck their cocks yet, even though they totally complimented on your shoes and pretended to care about your opinions. And he has decided that these men are pushy/arrogant/entitled because they do things such as ask a woman out on a date when they want to date that woman, instead of lingering around for years sending out resentment rays of passive aggression. And sometimes, yes, those men are abusive. But if he actually paid attention to the trajectory instead of gathered up evidence that he's a victim of women not falling on his penis, he might notice that very few abusive relationships start off as abusive. In fact, abusers usually do a really good job of appearing sensitive and interested in women, and then they start to make their move after the relationship starts. In fact, I would point out that this is why Nice Guys® and abusers have more in common than Nice Guys® think! Both are groups of men who merely feign interest in women in order to get what they want. Nice Guys® just aren't as good at it.

But there is actually no reason whatsoever to think "social dominance" or "alphaness" means that someone is an abuser or an asshole, any more than shyness is evidence that someone is nice or sensitive. A lot of gregarious, confident extroverts are actually kind, generous, and sensitive. Being nice is, to be fair, usually not enough to get you laid. You probably should have talents, a sense of humor, a sense of fun, or something else that makes others think spending time with you will benefit them in terms of being fun. But there's no rule that says people who are funny, confident or talented can't be kind. Nor, as Miguel's complete indifference to the suffering of abuse victims demonstrates, is there any reason to think that lacking these qualities that draw people to you somehow means you're a kind and generous soul.

My counter-theory is that Nice Guys® group together traits like confidence with aggression, so they can convince themselves that confident men are always assholes, and thus that they're being unfairly deprived of pussy by women who are sick fucks that enjoy being abused. Are some confident men abusive assholes? Absolutely; look at Charlie Sheen. But are all confident men? Well, I can't prove beyond a shadow of a doubt that someone like Matt Damon is a truly nice guy, but gosh, he seems like it. But what I can say is I've known many men who are great husbands/boyfriends and are also confident men that Miguel would probably denounce as pushy/entitled because they're honest about what they want. Some shy men are also very nice people, just shy. But many shy men are inconsiderate fuckwits or even wife-beaters. I just don't think there's a strong correlation between "alpha"-ness and basic human decency.

But I do know this---there's no amount of shyness that turns a man who worries more about men not getting laid than women getting beaten into a nice person. None.