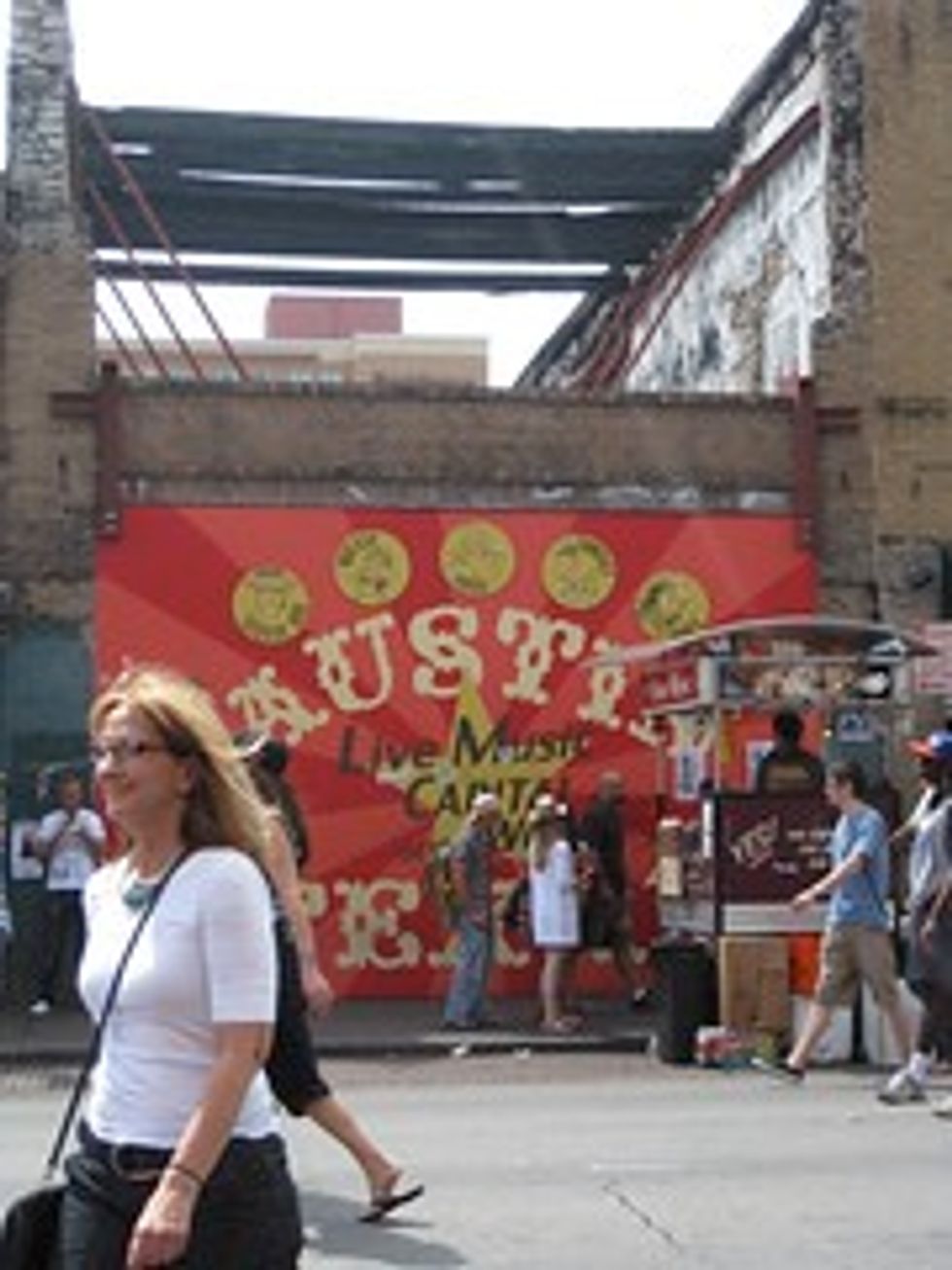 This picture is of a punk club I spent much time at in college, and which burned down nearly a decade ago and has never been rebuilt.

It's certainly not the end of days, but it is the end of the festival. I spent early Saturday winding my way through SXSW parties downtown, nabbing food and swag, until I got to my destination, Cedar Street Courtyard, for Those Dancing Days at 2PM. They must have canceled, because some brutal stoner rock band came on. I had told friends to meet me there, so I was all apologetic, but at least Datarock came on at 3PM and, like they always do, put on a highly entertaining dance party. 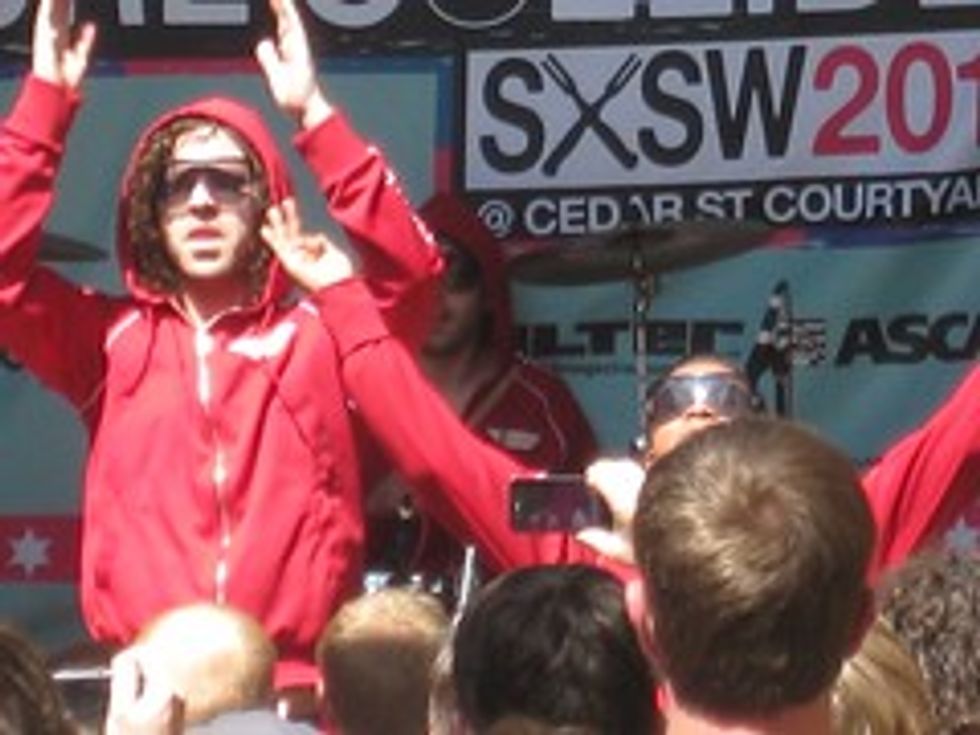 It was really and truly hot by then, though, and so none of us got in the crowd to dance it out. Hey, some concessions have to be made after you turn 30. In general, I'm becoming acutely aware of how not-under-30 I am. I don't think it's amusing if the punk club doesn't have a seat on the toilet, and I was pretty fucking pissed at a later show when some guy threw a beer in the air at a later show and it spilled on my head. But on the whole, these are minor things, and certainly no reason to think that it's time to hang up one's hat and do whatever it is that people do when they decide they're too old to keep up with music anymore. (I believe the answer involves trying to find room for a bassinet in your house.) On the whole, I find the young'uns in the clubs trying to get laid and look tough amusing.

After that, we went to a place that was basically made up for SXSW---named the Rumbler Lounge or something, but is in fact just the upstairs at Peckerheads---to endure yet another terrible stoner rock band before getting to see Le Butcherettes, a punk band out of Mexico. They were no Shilpa Ray---who is?---but they were channeling that same dark, Nick Cave/Cure vibe, but through screamingly loud punk rock with a garage vibe. At one point the singer just stood on the speaker and yell-sang without a mic. I would say that half the bands I saw---including this one---pulled the "singer/guitarist jumps into the crowd" move, but I thought screaming without a mic was the most punk rock thing I saw all week. Her anger needs no amplification and all that. One thing I'm really liking about the straight up rock we've been seeing this year is that the musicians feel no need to be hemmed in with the bass/guitar/drums/maybe rhythm model. This band, for instance, had a Casio keyboard, which the lead singer played alongside her guitar. 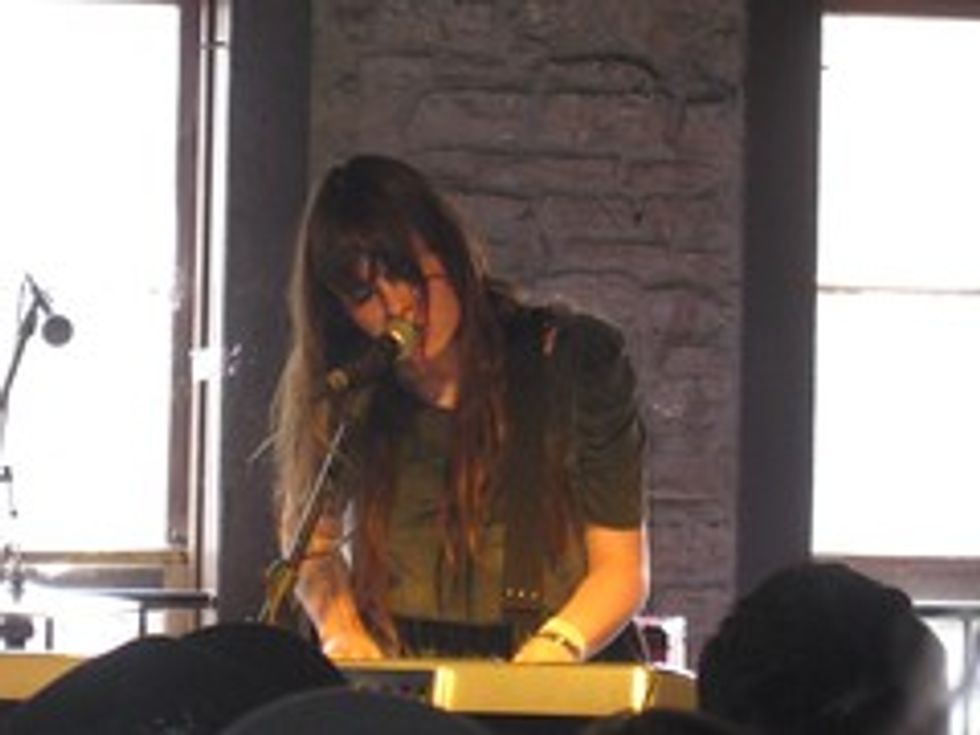 When that set ended, we tried to get into the Mess With Texas Party, but the combination of the line and the giant dust cloud over it drove us to just hang out in the apartment and then go out to dinner for a few hours. But we did get to hear some of Off! while we walked around, and that was pretty cool. They're a supergroup headed up by Keith Morris of Black Flag and the Circle Jerks, and from what I could tell, they were still kicking major ass.

We didn't get out again until 11PM, so we decided to just finish up the festival at Mohawk, which always has solid line-ups and has really tried to steal Emo's thunder, with great success. The first band we saw was from Nashville, called the Turbo Fruits. Sadly, no pictures of them---it was too dark, and this was the show that erupted into slam dancing and beer throwing, making it unwise to pull out my camera. They were really good, actually, because they had a whiff of the 60s melody making in them, but were much more on the garage side of the equation. Alas, there were also whiffs of stoner rock in their sound, and alas, this horrible music has its grips on my Southern brethren, and I fully expect they'll go in that direction and become unlistenable. But maybe they'll prove me wrong. 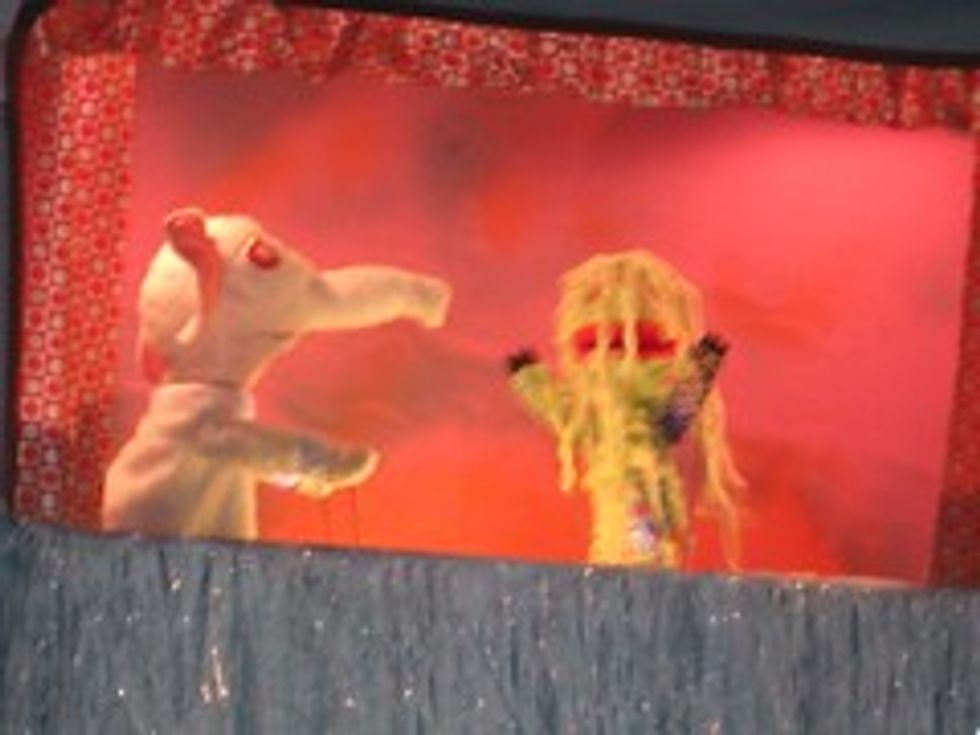 After that, we caught the tail end of Ty Segall's set, but we were mostly there to see the next band, Quintron and Miss Pussycat. They're hard to describe. They're very New Orleans, in the best possible way. (And in the sad way, since they took a massive hit with Hurricane Katrina.) Miss Pussycat is a puppeteer, and she started the show with a very cute and silly routine that involved magic pizzas and, to much audience acclaim, fucking with the police. Then Quintron came out and played and sang, with Miss Pussycat on accompanying, shout-heavy vocals. Quintron plays a bunch of modded and handmade instruments, which you can read about here. None of this, however, really captures what a remarkable musician he is on all these various devices, and so you'll have to just listen for yourself.

I do have one quarrel with Quintron. He claimed that Louisiana is better than Texas because you can walk down the street with a drink---or hell, just pulling on a bottle of liquor---in Louisiana, and you can't in Texas. On this, he is wrong. You just can't drink outside in downtown Austin, but in general, there is no law in Texas against drinking outside.