SXSW Day One, Part I 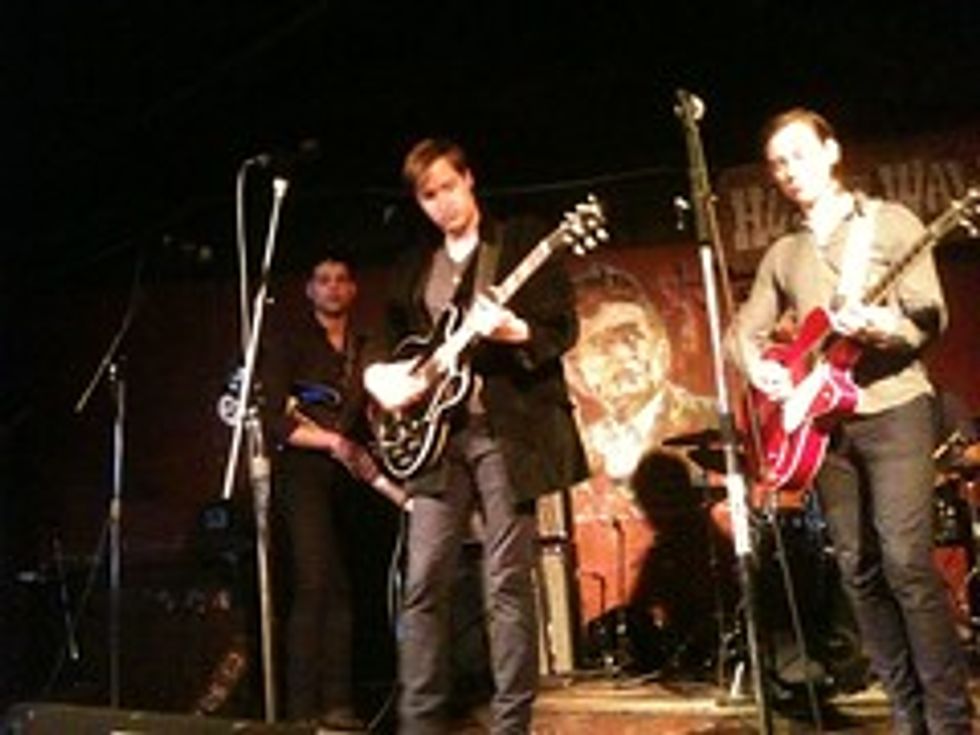 Wednesday got off to an early and magnificent start at a 12:30 show for The Hounds Below at The Hole in the Wall, a venerable Austin institution that is closer to campus than downtown. Since they have a 60s vibe to them, it was the perfect venue---you can see the Johnny Cash mural on the wall behind them, and the mixing was top-notch. Which is something we really realized later when we saw this band again at midnight at Maggie Mae's, and the dude behind the mixing board frantically spent the whole set trying to figure out what to do. The SXSW website described them, IIRC, as a cross between Roy Orbison and Modest Mouse, and that's accurate enough. I got a chance to tell the lead singer, Jason Stollsteimer, that I had nabbed a rare 45 from him at a show in Brooklyn. So that was cool; he told me there were only 200 copies. I can't recommend this band enough; I don't know why they aren't bigger. They've got pretty broad appeal, since everyone loves those lush, sad love songs of the late 50s/early 60s, right? Now it's just updated to an indie rock sound. 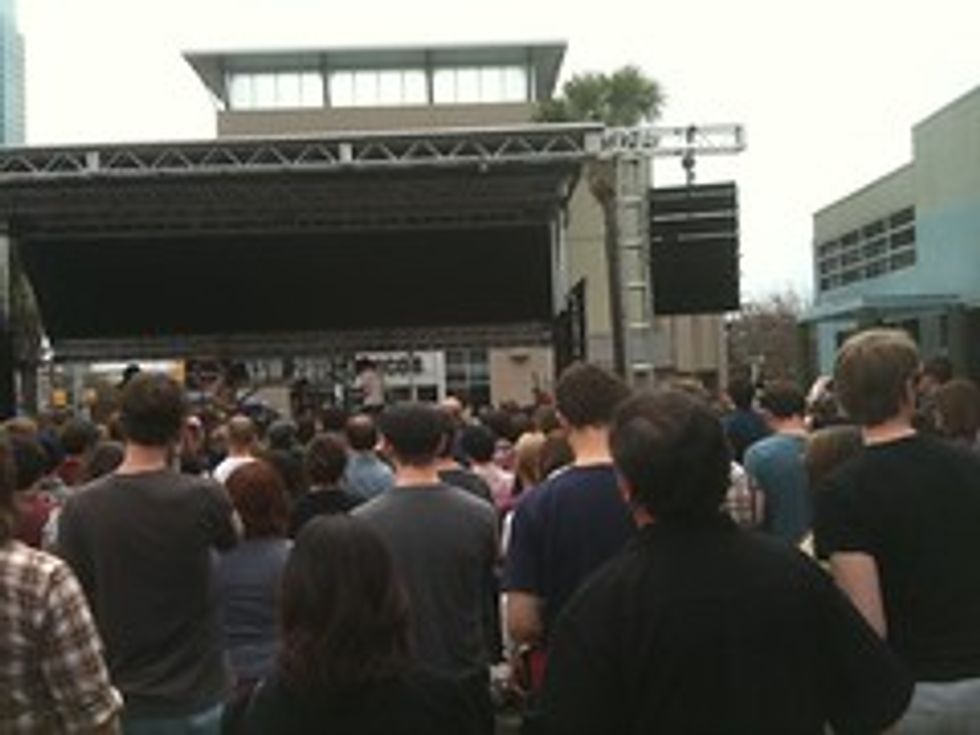 Then we decided to take a UT bus to Waterloo Records to see Wild Flag, Carrie Brownstein's new band. After waiting for 10 minutes after the bus was supposed to get there, it dawned on us that UT probably canceled their shuttle service for spring break. With that in mind, we ran to catch a less-awesome bus that dropped us further away, but at least, you know, worked. Due to all this, I caught 1 and a half songs of theirs and will be striving to see them again. Those 1 and a half songs were, however, awesome. I did not, however, figure out how to pick up the 7 inch they were selling until it was sold out. 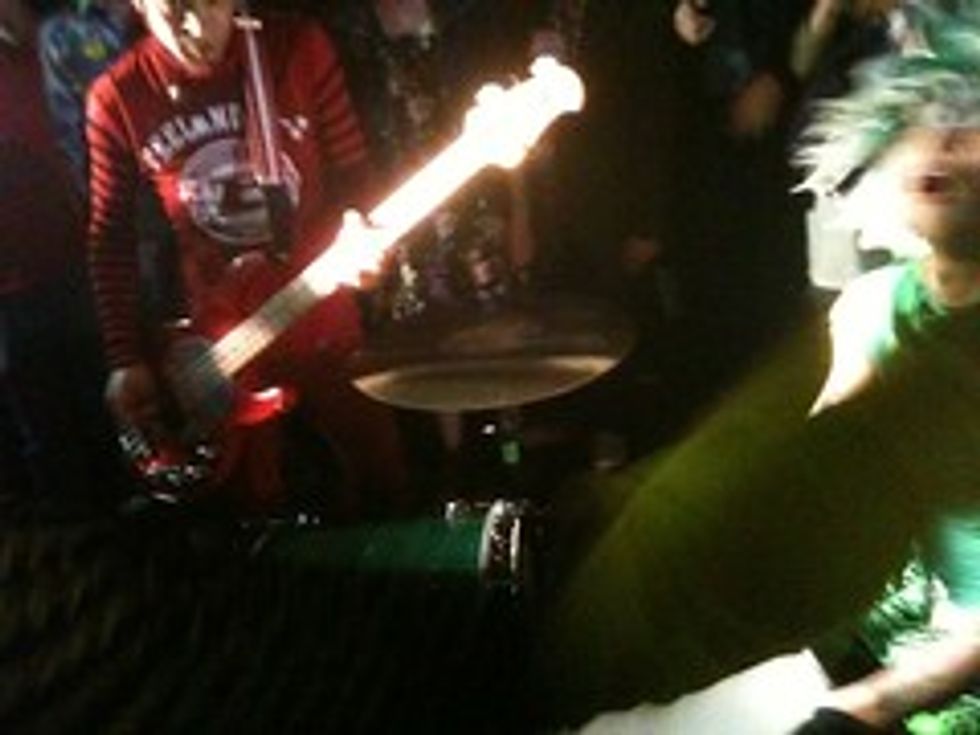 We ran around for a short bit, caught a 15 minute set from a dance punk band whose name I missed but who were giving it their all, and then some friends texted me from Elysium to tell me they were waiting to see Peelander Z. I'd seen Peelander Z before, and they're fun, but Marc hadn't, and so I said, well you have to see them once before you die. Their act is hard to explain, but it's a form of performance art that both embraces and sends up every kind of silly rock and punk cliche you can imagine, and then adds a layer of playfulness that involves human bowling and jokes about serving steak medium rare. This picture is them dragging all their instruments into the crowd and playing on the floor. They all live in the U.S., but are originally Japanese, so there was an extra layer of love in the audience. Neal Pollack was emceeing, and while they set up, he encouraged the crowd to yell out things they want to thank Japan for. There were a couple smarmy and racist jokes, but by and large, people were feeling the love. (I yelled "sushi" and "Honda".) If you haven't seen them, and you see them tour your town, it's an experience worth having.

After that, it was time for food truck food---there's a great vegan truck at East Side Drive-In that doesn't usually have long lines because most people don't know the dirty little secret of delicious comfort vegan comfort food---a short nap, and then a return to downtown. It took us awhile to find our groove. We saw Beat Connection, a band clearly inspired by LCD Soundsystem who had some really great ideas, but kind of needed to rein it in a little. And then we wandered over to the Parish, but walked into the wrong room. Luckily, the first band we saw was a nutso garage rock band named Fidlar that we thought kicked ass. Then there was some terrrrrible "rock" for old, boring people that came on after. We wanted to see a band at 11 we mistakenly thought was going to play, so we waited it out, standing at the window and people-watching.

As we did this, we saw a spontaneous parade of maybe 100-200 people form on 6th St. around a ragtag brass band that just up and marched down the street. With street musicians in Austin, many try but few succeed to attract this kind of attention, so we went outside to check it out. It turned out that the music gods were smiling on us. The band wasn't like good or anything, but they were fun and that's what mattered. We got down just as they started their last song. Wisely, they went straight for the jugular when it comes to a spontaneous crowd of random people in Austin, playing "When The Saints Go Marching In". Austin has much love for New Orleans, which has a new, defiant edge to it, and the crowd went nuts. Everyone contributed as they could. The stoners were dancing like dorks. Most people sang along. A big redneck brought football into it, yelling, "Who dat?" It was awesome, and I loved everyone right at that moment.

It was very fortunate that this happened, as I'll explain in part two. 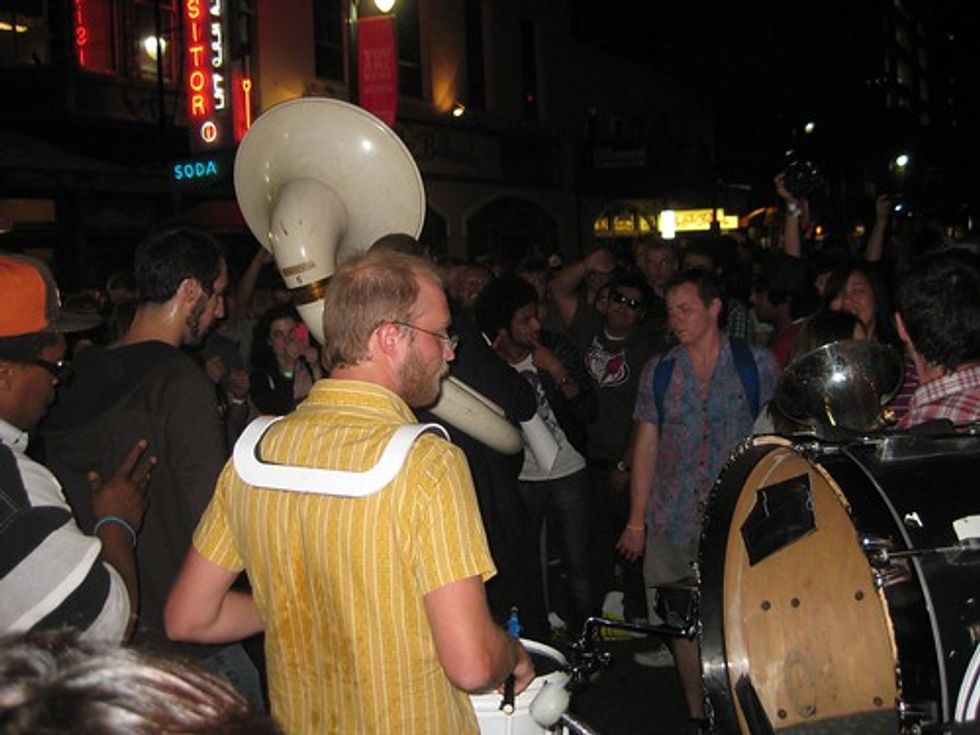