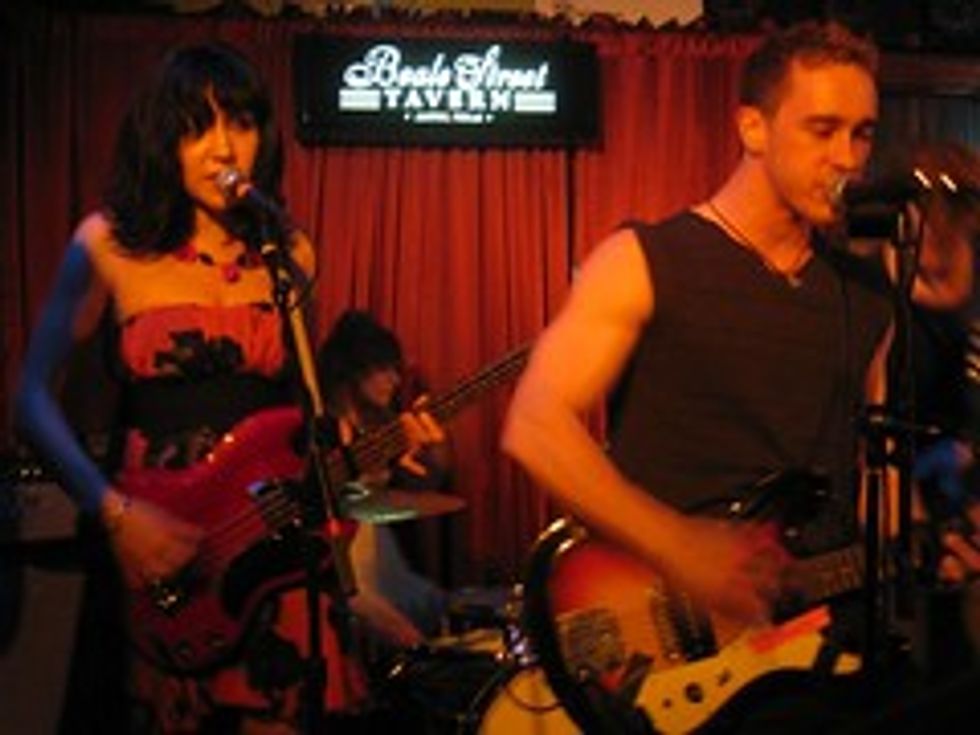 So, the reason that the brass band turned out to be fortunate was that when we turned around and returned to the club, we realized suddenly that the room we had been in was the wrong room. Had we not seen the brass band and left, we would have probably spent the next hour staring at some other band we didn't like, picking our noses and wondering how it all went so very wrong. As it was, we got to see The Vandelles. They were terrific---yet another band that's mining the 60s wall of sound concept, but my feeling on that is that it's a popular sound due to the being so fucking awesome. So there.

After that, we went and saw The Hounds Below again, and as we left, it was 1AM. We were walking past Emo's on the way back to the apartment and I said, "Ahem. Talib Kweli is playing Emo's." So there was no way we were going to miss that. Sadly, Emo's is dark, so the pictures I got were universally shitty. Kweli had a lot to pack in to a 30 minute set, and it was fucking awesome, especially as Jean Grae showed up and did a couple of songs with him.

Plus, while we were waiting in line for Kweli, we spotted the Hey Cupcake truck and indulged by splitting a cupcake. Some say New York City has the best cupcakes on the planet. It was, after all, where this cupcake trend really took off. But for my money, the Hey Cupcake truck makes everyone else look like a pretender. So if you're in Austin, and you see the big pink cupcake, I recommend going for it. In general, the food truck thing in Austin has grown dramatically since we moved. It was already underway, but now there are more than twice as many trucks as when we moved away. So much good food and a surprising amount of variety. We didn't have a chance to eat there, but my favorite truck name so far has been Po' Girls.