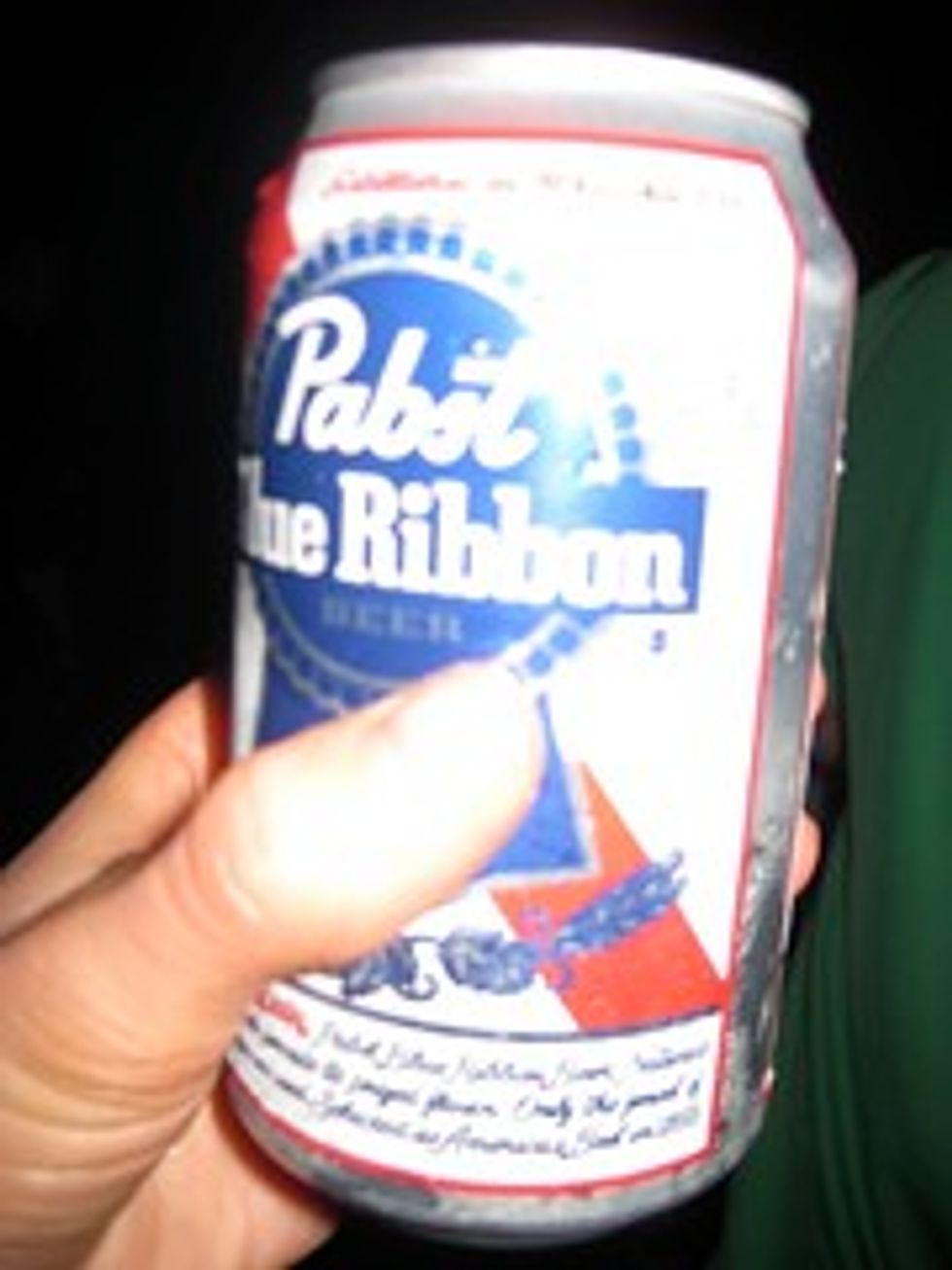 PBR was giving away free beer at one party we went to. I don't, as a general rule, drink PBR, but I figured it was funny in light of all the recent anti-hipster haterade out there. Stop hating, people! Without over-the-top hipsters, people-watching during down time at SXSW wouldn't be nearly as fun.

Yesterday was notable mainly because every act I saw worth really writing about was female-led or even all female. And, more importantly to my feminist heart, this wasn't something I really noticed until I was uploading the pictures to Flickr. It's becoming normalized for women to be in leadership roles in music. Don't get me wrong. We have a long way to go as evidenced by this intro to Wild Flag in the Austin Chronicle:

Ladies of a certain age are no doubt squealing about Wild Flag, the "supergroup" of Mary Timony, Sleater-Kinney's Carrie Brownstein and Janet Weiss, and the Minders' Rebecca Cole.

I don't have a problem with the sentence, which is amusing and true and probably something I would have enjoyed writing. But the assumption still lingers in the music fan world that men aren't and can't be expected to care about women playing music, and I think that's something that needs to be changed. And in reality, there are a lot of men who were just as full of squeeing excitement for every act I'm going to describe. Believe me; men's average height advantage over women is a continual thorn in my side when I'm trying to see the stage. 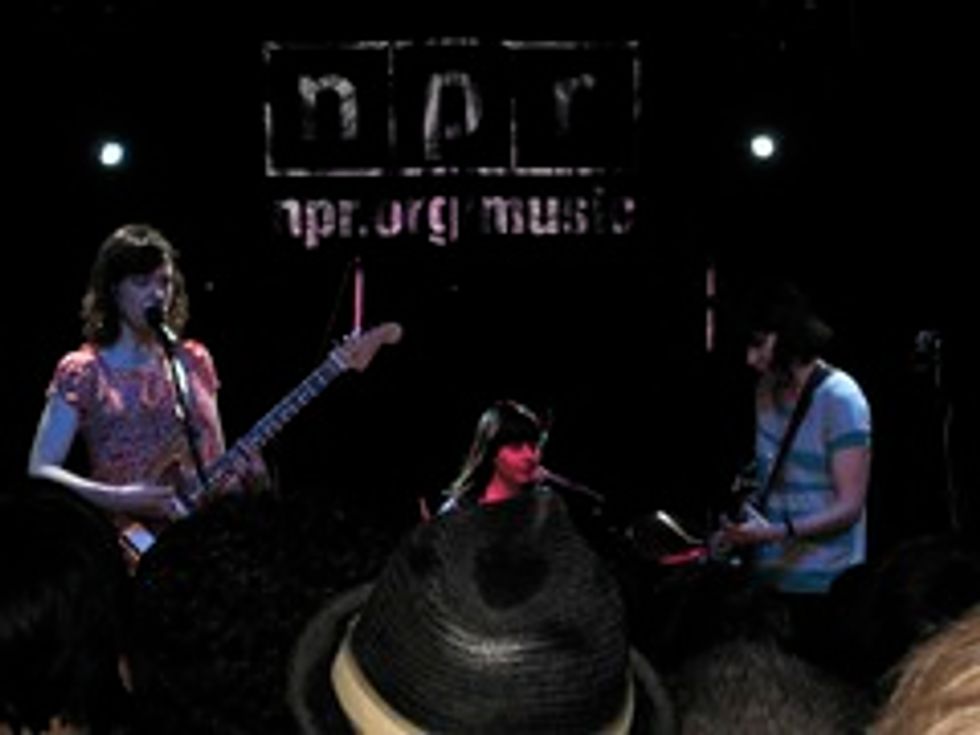 Speaking of, I did get to see Wild Flag again, because I missed most of the set they played at Waterloo. It's just as well, because they put on a show that's like three times better. They don't have a record yet---a common problem at SXSW---but definitely one to keep an eye out for. They did have a 7", which I picked up. Their last song "Glass Tambourine", would have fit quite neatly on the Nuggets record.

Most of the time, I can just describe these shows for you. But NPR was broadcasting live from this set, so you can actually listen to it for yourself. 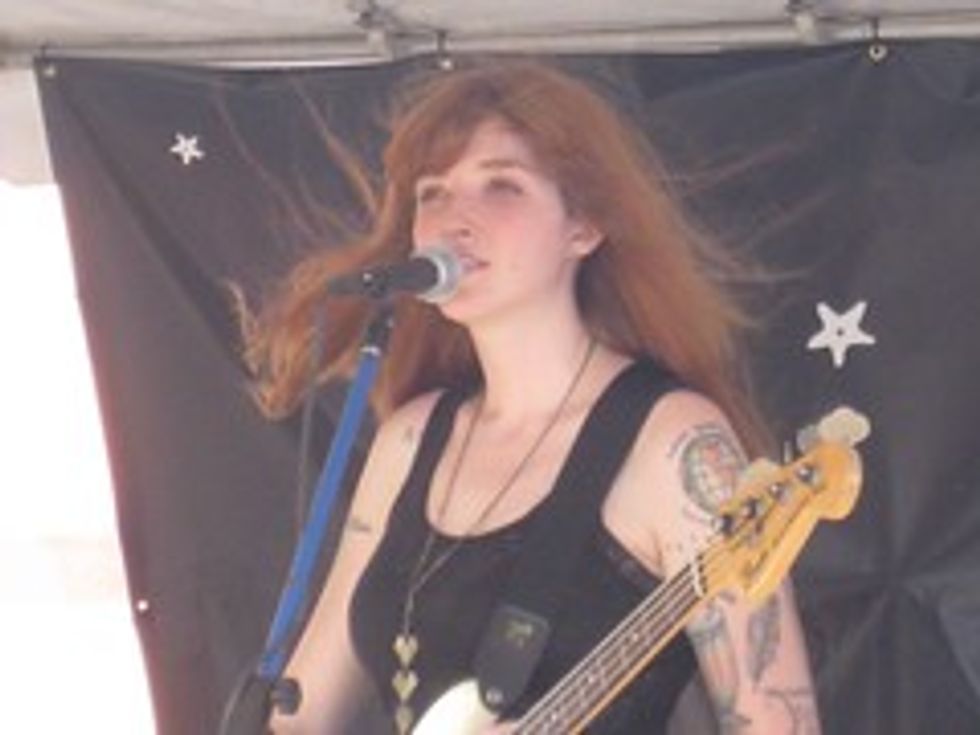 After that, my girl friend and I met up with some friends and screwed off at the French Legation for an hour (where we discovered that the ever-innovative food trucks of Austin have taken the wrap concept and applied it to tacos, naming them "taco-shaped sandwiches"), and then we went to one of my favorite bars in Austin, Shangri-La to see La Sera. I'm completely up the ass of this band's first record, because the melodies and bass lines just really hit that sweet spot. The set was great, but I realized that the lack of a vocalist to harmonize with Katy Goodman---who has a very high, sweet voice---is a problem for their live shows. But the record is great, and this was the perfect music for 5 in the afternoon in Austin in the spring, with the warm sun and general sense of well-being. 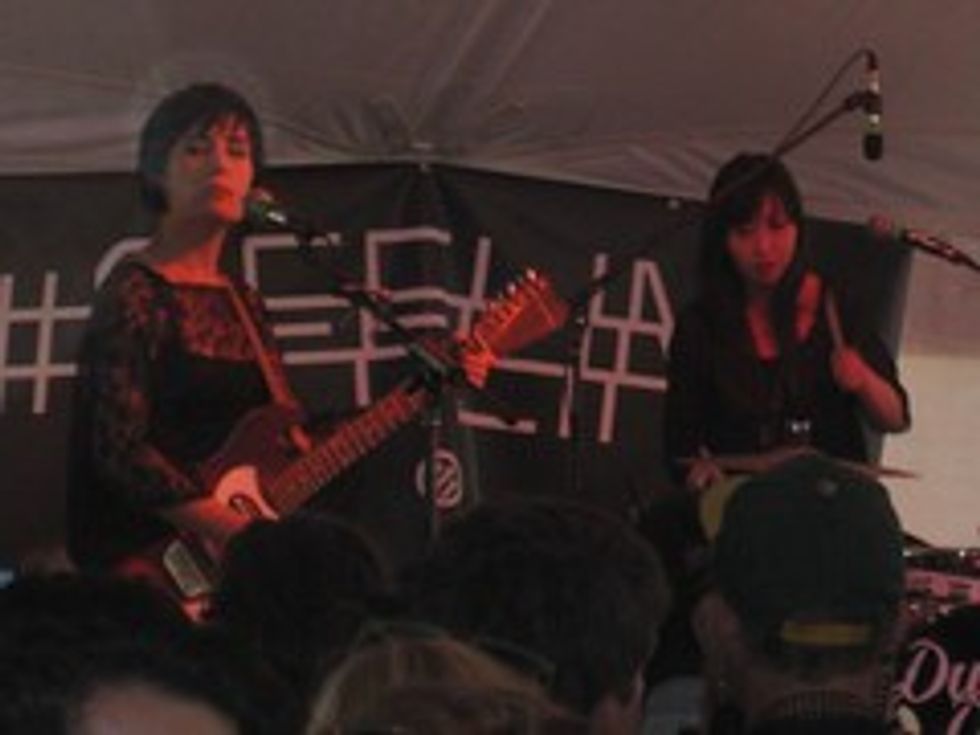 Then it was on to the East Side Drive-In, where two stages have been set up, and luckily for us, The Dum Dum Girls were in the tent stage. This created the occasion for the funniest celebrity spotting of the trip so far---Aziz Ansari brushed past us in the crowd, and my friend recognized him. At which point, I was like, "Nuh-uh!", because I'd seen him at The Dum Dum Girls show in NYC. Of course, there were probably more than just two people at this show that were also at the NYC show. The Dum Dum Girls put on a great set, just like last time. Despite their morose/goth pose, they have a shit ton of energy, and are really danceable. (Like The Cure or The Smiths, I suppose, and they drew that line themselves by ending the set with a cover of "There Is A Light That Never Goes Out".)

Doing night shows turned out to be kind of a weird thing at first. I wanted to see Calvin Harris at 10:30, because his songs amuse the fuck out of me, but I didn't have much to do beforehand. So I went to the club he was playing, just to make sure I got in, because there were a lot of people in line trying to pay a cover to get in, as well as people getting in with wristbands and badges. And basically, it was a couple of DJs---DJ Sasha and DJ Afrobeat, I do believe. I liked the latter a lot more than the former, but both were good at what they do, which is relentless thumping house music. I can like that sort of thing, but after awhile, being in a room full of meatheads and people smoking weed and doing drugs started to wear on me. Marc showed up in time for Calvin Harris, and we stayed for two songs---again, that were really good, but were still more house. After watching a 'roided up dude get so excited at one beat Calvin Harris was spinning that he started punching a pillar, I said, "Hey, let's try to get in to Janelle Monae." 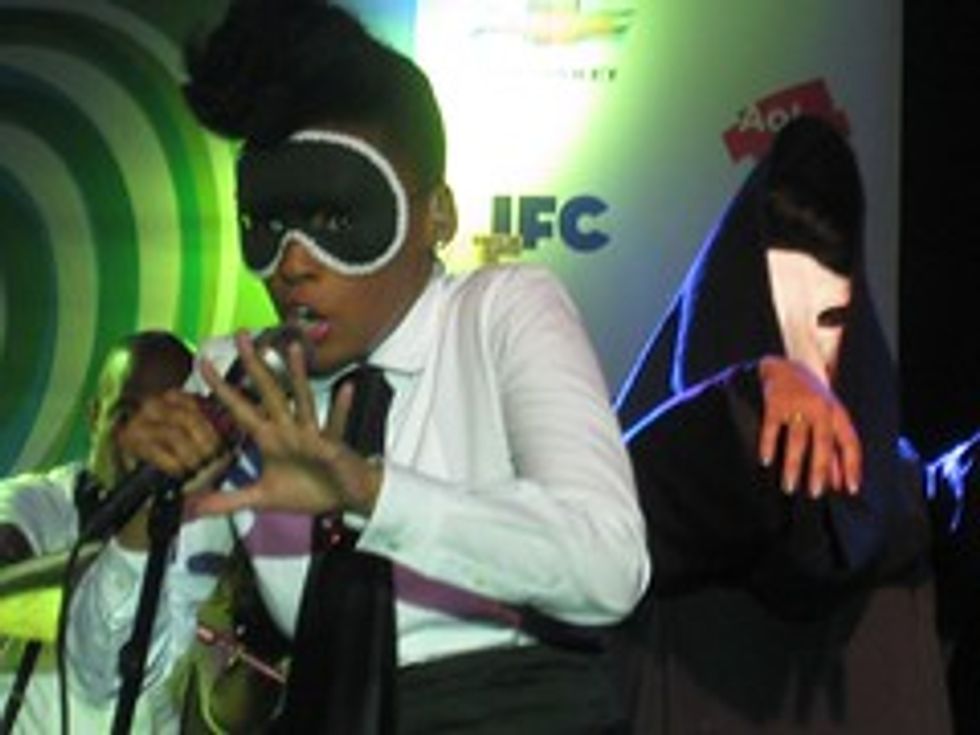 You see, Cee Lo Green was supposed to play La Zona Rosa, but he canceled, and word spread rapidly Monae was his replacement. As expected, there was a line to get in the show, but we were early enough that it wasn't hellacious. We did stand in line for the entire length of B.o.B's set, and then we got in just in time to see Wiz Khalifa. We didn't know his music, and didn't know what to expect, but as the sea of half-washed stoners wearing backpacks should have indicated to me, it wasn't going to be something I like. And sure enough, Khalifa mostly rapped over his own CD, and it was mostly songs about smoking weed and just other general tired topics. Which I didn't like, but I did take the time to drink a tasty beverage while checking my email, so some good came of it. A plus, it meant a lot of people cleared out, giving us a chance to move up to the front for Janelle Monae. 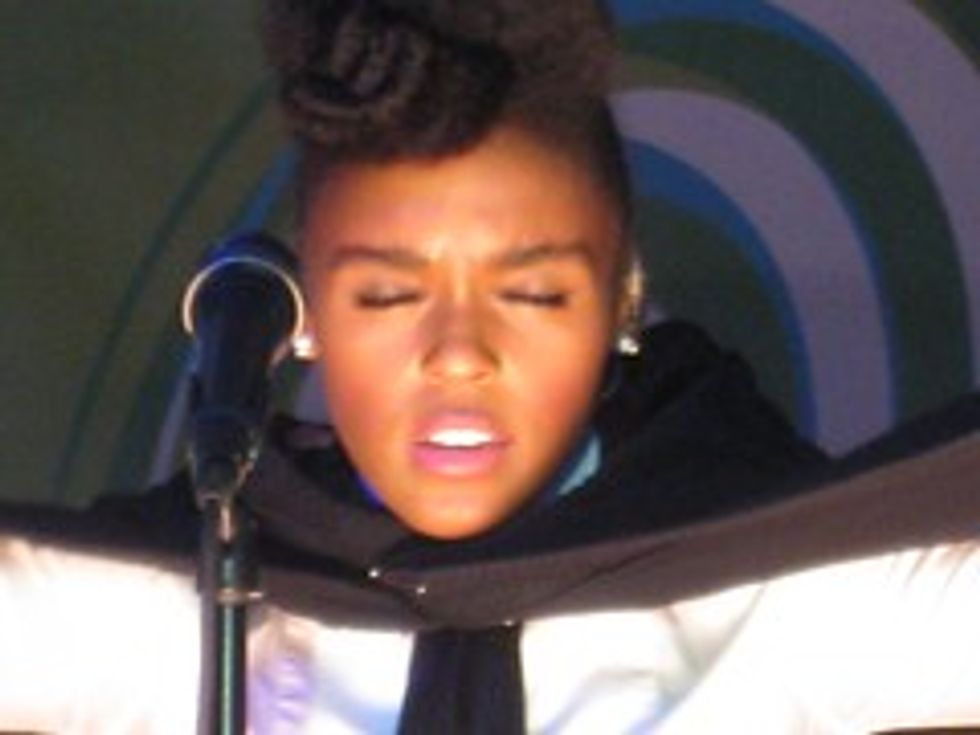 We got to stand about five rows back, close enough to hear her voice over the microphone, which really gives you a different experience because you can hear directly how powerful her pipes are. Also, frankly, how movie star-beautiful she is. Why she isn't the biggest star in the country continues to baffle me, though I suppose some people can't get past the men's clothing thing. So much the sadder for them. She performed her ass off, and unlike when I saw her open for Of Montreal, she had a much bigger band with back-up singers and a horn section. Her closing number was "Come Alive", which involved getting everyone in the audience to squat on the floor, before erupting into one final frenzy of dancing. It was that kind of show. 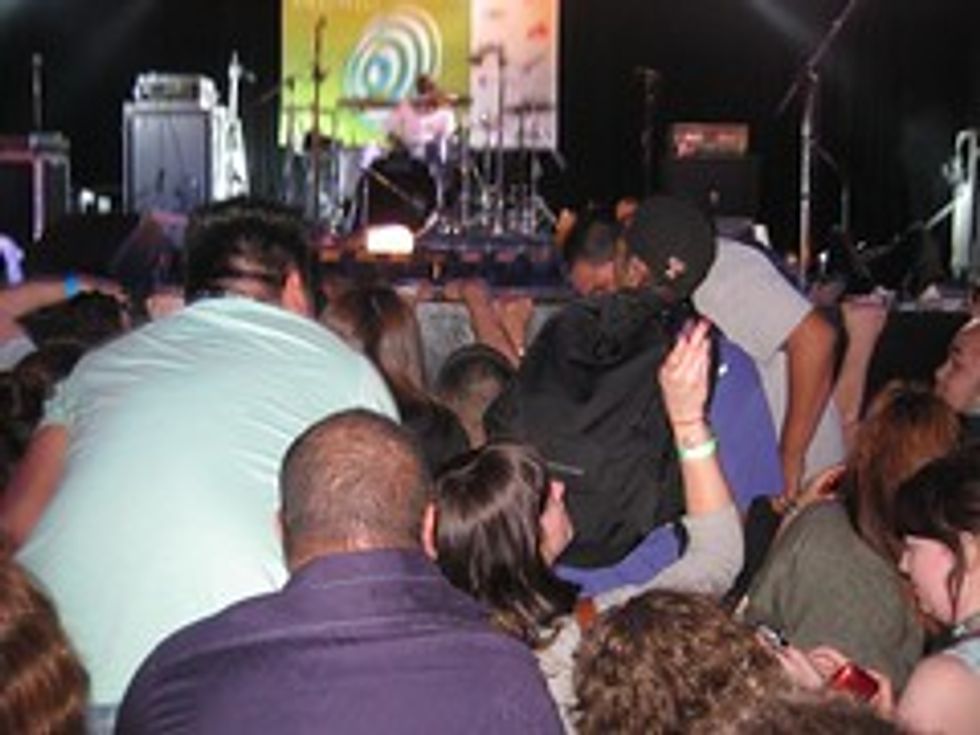 My knee still hurts after jumping around so much for "Cold War" and "Tightrope". But well worth it.