Man, lots of stuff about reproductive rights to discuss! I spent the entire weekend in a fury over how the mainstream media kept calling funding for contraception, STD treatment, and other forms of reproductive health care that isn't abortion "abortion funding", so I wrote a primer for journalists at RH Reality Check on how to tell if what's being funded is an abortion or not. I did see one TV report that actually addressed the fact that birth control pills, STD testing, and condoms aren't abortion. Naturally, it was on "Rachel Maddow".

Visit msnbc.com for breaking news, world news, and news about the economy

Unlike almost everyone else, Rachel Maddow was willing to call bullshit on the anti-choice narrative where any health care going to a sexually active woman whatsoever is "abortion". She is the only person I saw who linked this recent war to defund contraception to other anti-contraception activism on the right. She's the only one I've seen who gets that when people are fighting a war on contraception, it should be characterized as such.

I'm thinking of starting a Change.org petition to address this, probably to the New York Times, but am still a little stymied about how I'd phrase all this. Suggestions welcome.

Of course, part of the problem that confuses this issue is that liberals generally do think that abortion should be funded, and so we're stuck between saying that and making it clear that these budget fights are about contraception and STD treatment, not abortion. But abortion funding is simply not on the table at this point in time. Which is why abortion funds exist, to help make up some of the gap, and why we're doing another fundraiser for abortion access, like we did last year. Yep, it's bowl-a-thon time, folks, and I've started a bowling team and we're actually going to bowl with everyone else on Sunday at The Gutter in Williamsburg in Brooklyn.

Our team is called The Silver Ring Strikers. Abortion funds operate deliberately with very little overhead, so the vast majority of any funds you donate will go directly to women who need abortions in New York. New York Abortion Access Fund is a busy one, because many women who live in areas where anti-choice legislation and anti-choice harassment and terrorism have made access hard come to New York to get abortions. So you're really helping the neediest when you donate. If you want to join the team and help raise money, you can do so from that page.

But in case that's not enough, as I did last year, I promise to humiliate myself if we reach fund-raising goals. Our team's goal this year is $2,500 (though more is always welcome). So here are the various things I will do if we make certain amounts:

*If we reach $1,500, I will post a poll on whether or not I'll continue to post Food Saturdays, so people who have strong opinions on my cooking skills, food untasted, pay attention and open your wallets.

*If we reach $2,000, I'll do a webcam video answering the first question (that's not of the right wing harassment variety) asked of me on Formspring after we reach that goal.

*If we reach $2,500, I'll bowl in the dress I wore to the WAM! Prom, and of course, post a picture. To get an idea of how ridiculous this will look, here is a photo of me wearing the dress: 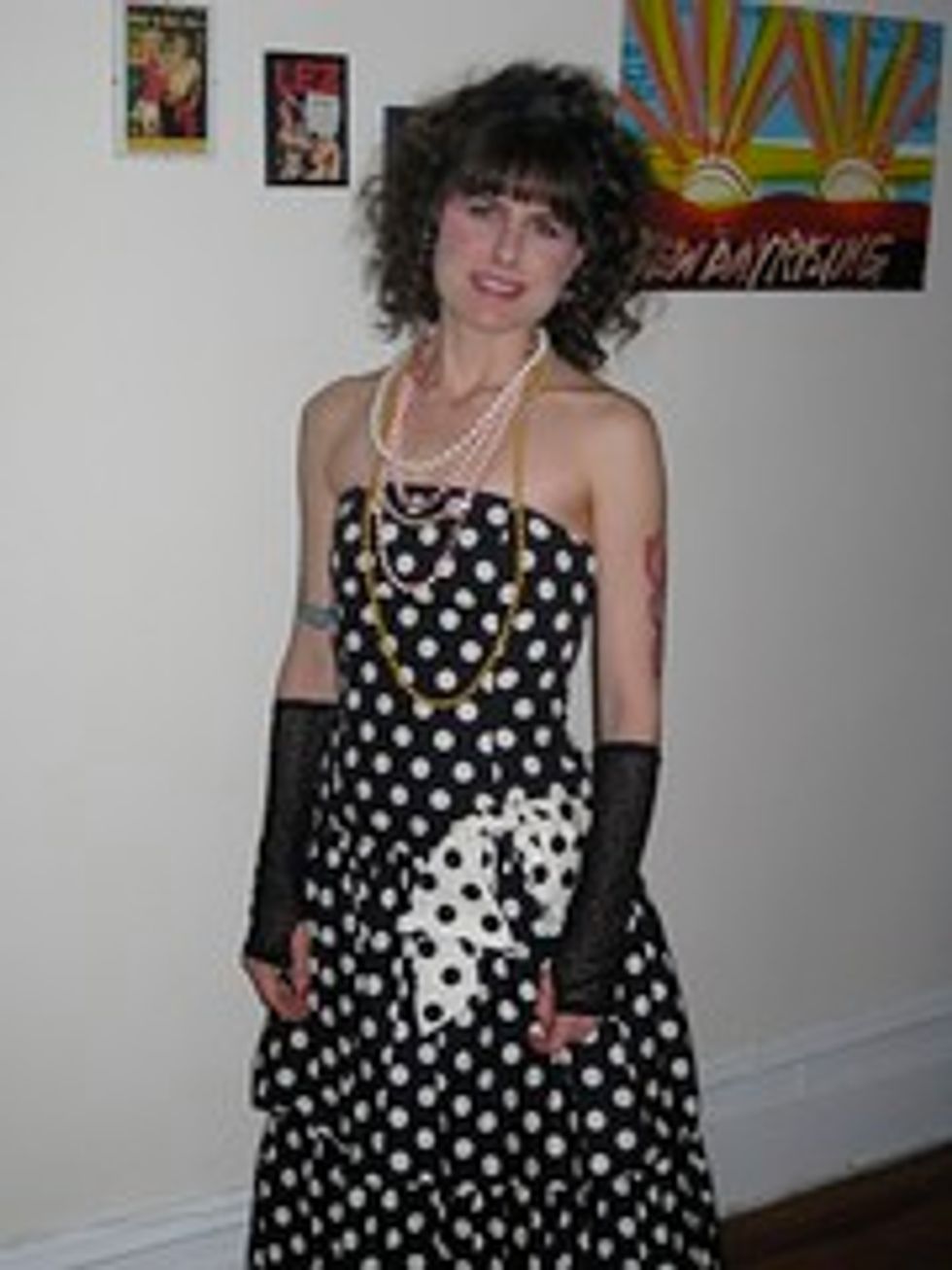 Anyone can donate for the cause of making me look stupid/helping fund abortions in the New York area, but if you're actually in New York, there's an event tonight you don't want to miss. It's called "Ain't I A Woman", and it's at the Galapagos Art Space in Brooklyn. It's a suggested $10 donation, and it's going to be doors at 6PM. There will be three rapid-fire panels from 7PM to 9PM, and then the rest of the night is schmoozing, drinking, and a DJ playing, so it's going to be way more fun and relaxed than most panels. The three panels will be discussing the intersection of race and feminism, and I'm moderating the second one, about the reproductive justice movement and the role race and racism plays in reproductive health care access. The panelists will be Lori Adelman and Aimee Thorne-Thomsen, and the other panels will be about pop culture and feminist blogging. Good times, good conversation, so come on out!

And, in case you haven't read it, I have a piece at the Guardian's CIF America about the recent budget shutdown fight and why reproductive health access is becoming such a big deal on the right.