Sadly, No grabbed what might be my favorite wingnut rant of the day (just kidding, it's this one) from Renew America.  Jeanne DeAngelis heard a black President praise Mexican food, and basically her brain exploded:

Playing to a full house and lost without Jon Stewart writing the jokes, Obama attempted to make a funny when he said, "I asked Michelle the other day, I said, 'What's your favorite food' ... She said, 'Ah, Mexican food.'" Then Obama issued a comedic warning: "You do not want to be between Michelle and a tamale."

According to the President's bad joke, a woman who's making a career of policing the plates of the whole nation does not let anything or anyone come between her and a tamale hankering.

Needless to say, she also lists the menu for the Cinco de Mayo event with a tone of high outrage that people at a White House party are eating super-duper-unbelievably fancy food.....like pico de gallo.  No, I'm not kidding.  She calls the Obamas "epicurean elitists", and this food is evidence:

Amidst green and red revelry, a Margarita bar and "corn and plantain chips served with Guacamole, Salsa and Pico de Gallo Tuna," the President gave a warm "Welcome to Cinco de Mayo at the White House."

Huh. I had no idea I graduated to "epicurean elitist" the first time I got a $1 barbacoa taco from a taco truck.  Learn something new every day.  Amusingly, this woman wants you to know that she totally speaks Spanish, unlike that grumble grumble President, and to prove it she translates the song title for "Oye Como Va" for her audience.  (Though I think she misses that there's a subtle pun going on in the lyrics, or at least that's how I always understood it.)  I'm surprised she didn't go the distance and translate "pico de gallo" for her audience, which, if taken literally enough, could create a whole new avenue for outrage.

Anyway, I think the lesson here is clear: We should all eat a tamale in solidarity with Michelle Obama.  Just not one of those raisin ones.  Those are unholy. Sadly, this week's food blogging doesn't involve any tamales, because I don't know how to make tamales, nor do I have the inclination to spend the amount of time that tamale-making really requires.  I do miss them, though.  I haven't eaten a single tamale since I moved to New York, not even on Christmas Eve.  So I suppose next time I have a chance, I would crawl over the First Lady to get to it.

Well, here's some food I have eaten:

We were up for some comfort food, so I turned to this “snobby joes” recipe from Post-Punk Kitchen.  I used kidney beans instead of lentils and carrots instead of bell peppers, because it’s what I had on hand.  This is the perfect recipe for my mini-chopper, just doing one ingredient at a time.

I meant to roast the zucchini, but I blanked out on doing it on time, so I ended up just quickly cooking it in a pan with some thyme from the garden and red wine.

There were blueberries and mangoes left over from a party we’d had the night before, so I mixed them up with pomegranate seeds, poured some dressing made with dill, lemon, and honey over them and served that as a fruit salad.

Vegetarian, ‘cuz of the bread.  Sorry the picture is blurry; it didn't look like that in the camera. 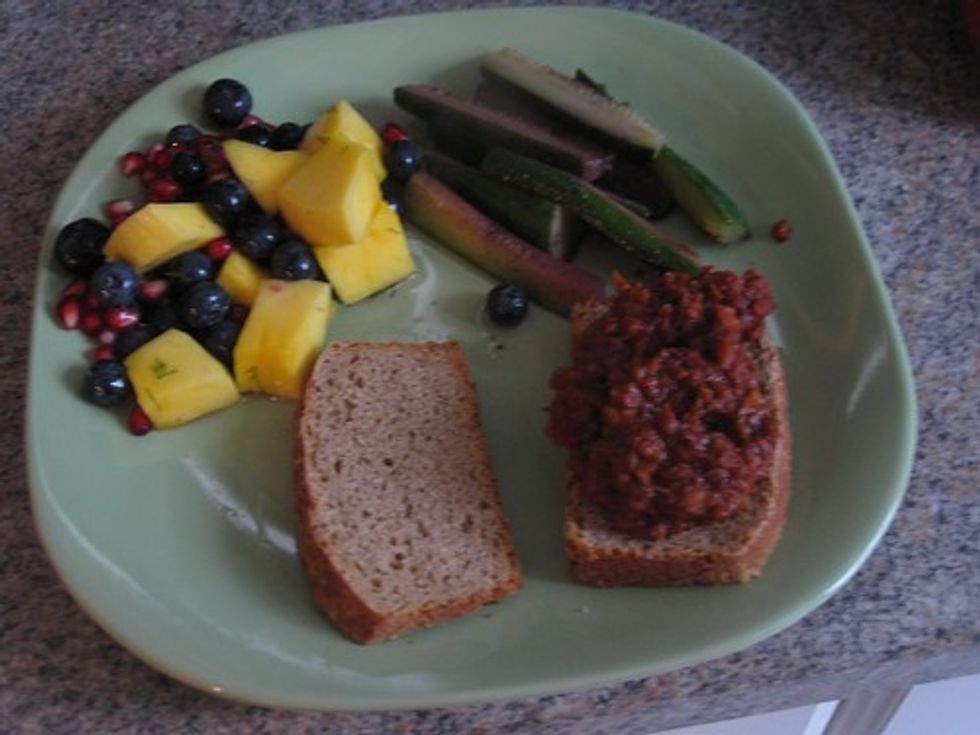 I roasted a beet from the farmer’s market.  Then I took some Swiss chard, also from the market, cooked it in a skillet with chickpeas, garlic, ginger, and parsley and dill from they herb garden, with some beer also leftover from the party.  Added the beets.  Served on pita bread with arugula and feta. 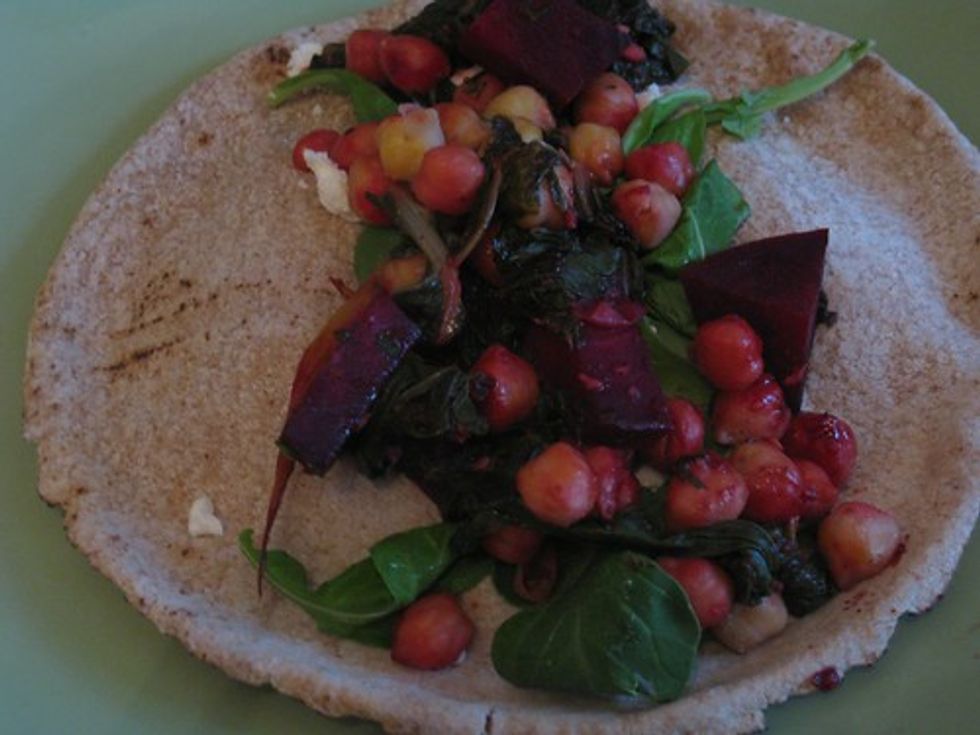