Okay, this picture made me smile: 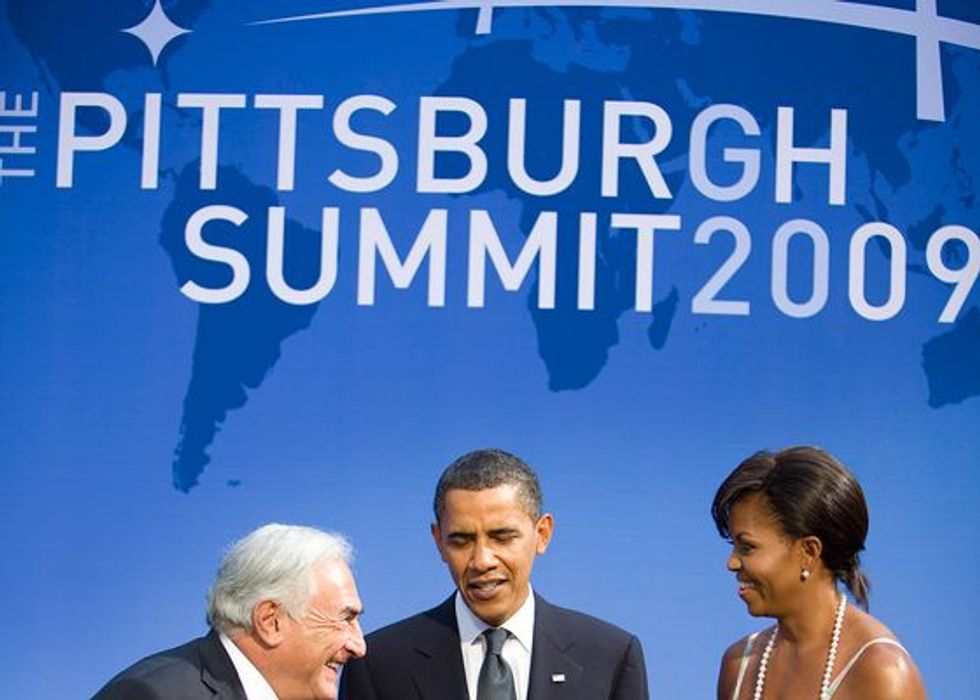 I need a smile after reading the news that Strauss-Kahn's lawyers, after realizing "he never touched her!" wasn't going to fly, decided to go with the standard issue "she's a dirty slut" strategy.  There's something amazing about someone with such a history of rumors and accusations behind him as Dominique Strauss-Kahn saying someone else has crediblity issues.  I'm really curious to see what the actual evidence is, because the news reports are, as usual, mostly smoke and bullshit.

Note to anxious men who want to make even discussing rape impossible in public forums, I am not "convicting" Strauss-Kahn or weighing in on his guilt.  Please get over yourselves.  I'm just noting that the victim-blaming strategy is in full force, and that's fucked up.

On a lighter note, Marc showed me this video last night, and I'm still kind of amazed.  It's the movie trailers for "The Hangover" and "The Hangover II" played side-by-side.  It's uncanny.

I've been publishing a bunch of stuff this week.  I spent a lot of time researching the Slate piece.  I highly recommend reading it:  "Out of State, Out of Luck".  I'm sure you're all familiar with pro-choicers arguing that perhaps Roe was a bad decision and we should really leave abortion up to the states.  I decided to ask providers, mostly from actual red states, what would happen to their patients if that happened.  The answer is, "Bad shit."  So check it out.

On a similar topic, I wrote for Alternet about how telling anti-choice rhetoric is when it comes to their actual beliefs.  You'll be surprised to find out that I'm disinclined to think that the indifference to women's suffering when they're raped and the assumption that women are stupid stems from their professed love of fetuses, and that the common thread here is just plain misogyny.

The Revealer is doing a series of responses to the release of a Catholic-funded report into the sex abuse scandals that found, once again unsurprisingly, that the Catholic Church believes it was innocent and the hippies did it.  My contribution is here.  It's a touch scathing.  Just a touch. You'd barely feel it.

By the way, a lot of the "findings" of the report rest on the assumption that the priest sex abuse thing is all behind us now.  But in fact, it's really not.

Father Riccardo Seppia, a 51-year-old parish priest in the village of Sastri Ponente, near Genoa, was arrested last Friday, May 13, on pedophilia and drug charges. Investigators say that in tapped mobile-phone conversations, Seppia asked a Moroccan drug dealer to arrange sexual encounters with young and vulnerable boys. "I do not want 16-year-old boys but younger. Fourteen-year-olds are O.K. Look for needy boys who have family issues," he allegedly said.

But the hippies did it!