The gendered war over the grunting lunkhead gym rats 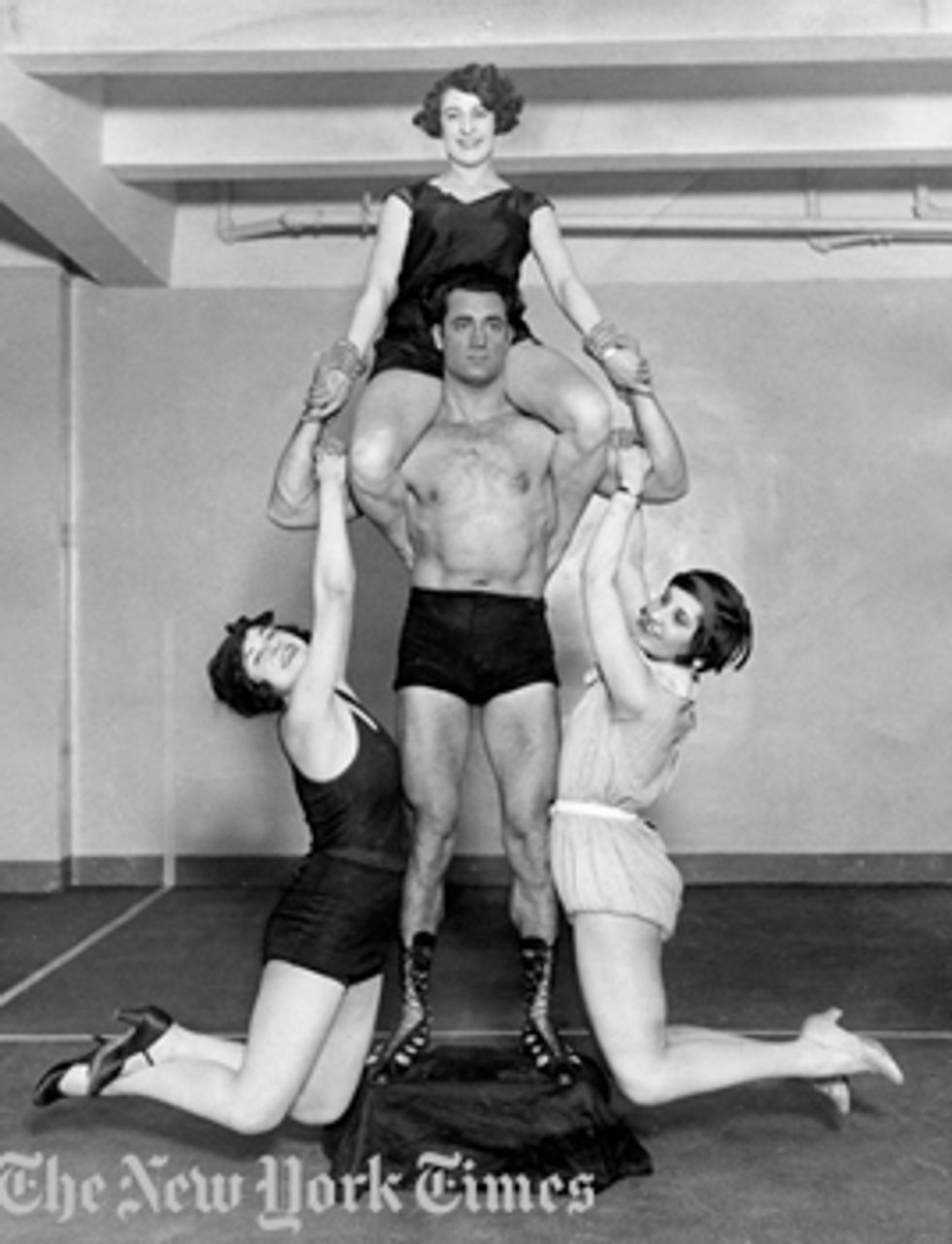 Let's be clear: I'm not advocating that journalists fall into some namby-pamby "both sides" trap where they pretend that both sides to any issue have equal arguments, which often requires deliberately surpressing one side's better arguments to make everything seem equal.  When I say that this article by Luke O'Neil on Planet Fitness oppressing beefy dudes who like to grunt through their workouts is one-sided to the point of ridiculousness, I'm not suggesting he shouldn't have a point of view and a willingness to argue it.  But man, his total unwillingness to look at the arguments from the other side undermines his points completely.

To recap: Planet Fitness is a gym chain that has made into a sales point that they banish people that Luke affectionately calls "lunkheads" from their gyms.  To do this, they take measures like banning certain moves only body builders use, and having alarms that go off if you drop weights or grunt too loudly.  They also, according to Luke, scold you for sweating too much.  (I'm skeptical. Luke admits that Planet Fitness puts more of an emphasis on cardio machines than he'd like, and those are the ones that really make you sweat, so why would they ban sweating?)  The reason, according to Luke, they do this is because Planet Fitness is, in his opinion, opposed to fitness.  His theory is that they make more money off people who don't work out, and so they run off everyone who does in order to make their customer base, who he characterizes as people who "don't want to work out", "doughy", and "fatsos".  He also mocks people who aren't bodybuilders for our supposed propensity to shovel pizza and candy.  To read this, you'd think there are two kind of people: muscle-bound body building geeks and people who pay for gym memberships but never show up.  People who loath working out but drag their asses to the gym to knock out the minimum their doctor requests, people who are out of shape but trying to get into shape, and people like me who love working out but aren't beefy bodybuilders are completely erased from this article.

And most interestingly, gender is completely ignored. Well, not completely.  A brief and deragotory mention of women and working out is invoked:

"It's just a Curves that allows men," wrote one critic on their Facebook page, referencing the hugely successful, if not quite competition-level, women's gym that has some 10,000 locations around the world.

And that's it. No examination into why someone might think there's a value to a gym that has more on offer than Curves' extremely low-impact focus, but isn't a body-building place. The gendered nature of the conflict that Luke is invoking is elided almost completely.  And by not looking at the role of gender, he misses the real story and what Planet Fitness is probably trying to do.  It's not that they're trying to get customers that don't want to work out so much that they're getting customers who love working out but want to be able to do so with minimum baggage.  And the majority of those customers are women.

If you shift gears and look at another demographic that is also heavily represented at gyms, an entirely different narrative comes out.  The bread and butter of many gyms are their female customers, the ones who run long hours on the treadmills and may do some weight-lifting, but it has little to do with grunting, peacocking routines of the lunkheads.  And female customers come in to gyms with a whole lot of baggage.  One reason women outnumber men on any given day at any given gym is that women are under far more pressure to not just be not-overweight but to be svelte.  Women are also more likely than men to be health-conscious.  But it's not just that women are expected to be thin and healthy and energetic (all hoped-for benefits of working out), but we're also supposed to be gracious, non-competitive and make it all look effortless.  Going to the gym can provoke a number of anxieties, because it threatens the balance between looking good and making it look effortless, especially if you're just starting out and need to work up to being in shape.

Really, I've found in a lot of ways, women can't win when it comes to physical fitness.  If you don't work out, you're running the risk of gaining weight.  But exercise is considered somewhat unfeminine still in our culture.  Thus many women end up choosing workouts that aren't as effective for them, such as refusing to lift or lift heavy weights, and cite concerns about getting bigger as a reason not to.  Starving yourself to avoid weight gain is bad for you, ineffective, misery-inducing, and brings more judgment on you, which is why Hollywood actresses who are clearly choosing that route make a point of being photographed stuffing their faces in public.  (Again, you're supposed to be thin but make it look effortless.)  If you do work out, you're supposed to be humble about it and defer compliments.  Women are also not supposed to have competitive feelings or be too proud of themselves, so while it's good to work out, there's stigma attached to being too intense or competitive (even with yourself) about it. By the time you walk in the door of the gym, you're a mess of contradictions and expectations, and that's pretty hard.

Smart gyms go out of their way to reduce anxieties and pressures for this reason, which is why the "no judgment" trend is so big.  They know that their majority-female clientele already is struggling with fears on inadequacy and fears of competitiveness and fears of working out too much that they draw attention but also fears that they're not working out enough.  Cultivating a "whoever you are is cool with us" vibe is like catnip for women.  That's why Curves does so well, but they're kind of limited because while they don't punish you for not being in shape enough, there's a sense that you're not welcome if you're a little too good at it.  Again, women get it coming and going.  It seems Planet Fitness is keyed into that and is poised to be like Curves, but even more flexible.

Ironically, then, this means that the lunkheads are a problem.  Because the one element that can upset a balance where women feel not too pressured but also not too limited is the introduction of a bunch of over-the-top masculine performativity.  Grunting men showing off how big they are makes women feel unwelcome and provokes all these anxieties that the gym might have otherwise been smart about minimizing.  Bodybuilders are overtly competitive, and as Luke's piece makes clear, more than a little judgmental about anyone who has different fitness goals than them.  (Maybe some people work out so they can eat the pizza, you know?)  They also provoke massive gender anxiety, and often that's intentional, as the guy's crack about Curves demonstrates.  I love working out and I love lifting weights, but when I go into the weight room and it's full of lunkheads, I feel dread.  Not because of any individual dude, but because an atmosphere of masculine competitiveness has been established and I don't feel welcome.  My femaleness starts to really stick out and I feel awkward.  Imagine how that must be for women who don't spend as much of their lives attacking gender hierarchies.

Which is why, beyond the sex stuff, it's easier for Aaron Schock to get away with posing on Men's Health than it would be for any woman in his position to do so.  Expending effort and achieving goals are constructed as masculine in our culture.  Men are doers.  So displaying your body, if you're a man, is as much about saying, "This is what I did and I'm proud of all my hard work," as anything else.  Women aren't supposed to preen about their accomplishments.  That's narcissism in a woman.  We're supposed to be hot, but it's supposed to look effortless and we're certainly not supposed to be proud of it.

Most men at the gym aren't lunkheads, but lunkheads are irritating because they, with every loud grunt and peacocking stroll around the room, remind women of the massive double standard.  They are proud of their efforts and are willing to make a lot of noise so you can see how awesome they think they are.  Their complete lack of humility draws out all our anxieties about being expected to do very well but also to demur praise or pride in our work.

Obviously, the cure for this is for women not to have to walk this tightrope, not for lunkheads to be banished from certain spaces.  But Planet Fitness isn't in this to fix all our social anxieties about gender, sex, bodies, and health.  They're in this to make money.  And they've decided that women (and men who feel similar pressures) are worth more money to them than the small, mostly-male segment of the population into body-building.  Instead of making demands that they and every other gym put the emotional needs of lunkheads before everyone else, how about looking into ways that people can not walk in the gym door carrying all these anxieties on their shoulders?