There is no one reaction to harassment 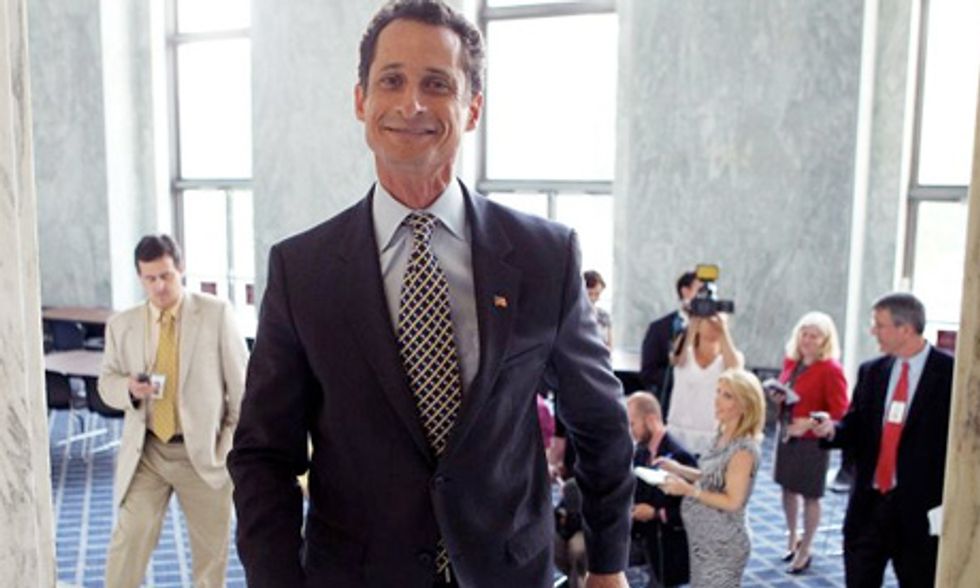 I  have a piece at the Guardian's CIF about this whole Anthony Weiner business, and why, even though this is primarily about attacking Weiner because he's a fighter, this fits into a larger pattern of right wing abuse of sexy young women for the  high crime of being intellectually independent instead of just doing and believing what right wing ideologues instruct them to do and believe.  We mustn't forget that Weiner isn't the only target here, but that a 21-year-old college girl has now had her life torn up by a bunch of misogynist asswipes who are using this as an excuse to invade her privacy, droolingly "analyze" her body, examine her for evidence of non-chastity, etc.  It's disturbing, and even if the allegations prove true (I remain highly skeptical), it is still no excuse to abuse the  young woman in question like this.  And certainly not to comb over Weiner's Twitter friends to see if any of them are hot enough to get similar treatment.  I get the distinction impression from the clusterfuck that's going on that a whole lot of right wing dudes are really relishing the opportunity to punish cute girls for choosing men that aren't them.

And of course, they have a punishing attitude towards Weiner for being widely perceived as lucky with the ladies.  I have no idea what Weiner's private life is like, and again, it's really not important.  And even if he is a cheater, I'm unclear on why harassing him is appropriate.  But if you have any doubts that the logic of harassment, especially sexual harassment, has kicked in, check out Weiner's enemies are using the rape/sexual abuse apology handbook.  Jesse and I covered the "asking for it" aspects yesterday.  Now, Ace of Spades has brought in one of the most irritating pages from the handbook, "She's Not A Victim Unless She Acts Like I Expect Victims To Act, Which Is Subject To Change Depending On My Needs".  Except the "she" in this case is Weiner.  For instance, if women report rape right away, that's taken as evidence they're lying, but if they don't, that's also taken as evidence they're lying.  Everything confirms what someone has already decided is true.

And so Ace has decided Weiner is guilty because he's supposedly not acting harassed:

I love how we're all wingnutz because we've been out of the house enough to know how human beings behave. Like if they're seriously victimized in a malicious crime, they tend to get rather angry. They don't toss off casual jokes about it and try to change the subject right away.

They dwell. They vent. They use ALL CAPS or shout in real life. They make threats of furious consequences.

He goes on at length, citing his repeated viewings of "Law and Order" as foolproof evidence that he knows how innocent people behave and it's not like Weiner.  Which does contradict his assertion that he understands human behavior because he leaves the house, and suggests the opposite, that perhaps most of his conclusions about human behavior stem from television.  And from his long time spent in front of the TV, he can tell you that there's only one way a victim of a harassment campaign should act, and that is conveniently not how Weiner is acting.  Ace doesn't mention that the woman that's being harassed did in fact act this way, because that would undercut his point.

Well, I have one thing to say about this, which is unlike Ace, I do actually get my knowledge of how people act outside of TV.  And I'm also a feminist blogger who has a lot of friends who are feminist bloggers.  So I'm intimately aware of how people react when they're subject to harassment campaigns, because I've been subject to about a dozen of various sizes and many of my friends have gone through that experience as well, to varying degrees of trauma.  And what I've learned is not only do not all people react the same way, but individuals may have different reactions to different kinds of harassment.

Some people try to blow it off.  Some people crawl into bed and weep.  Some people get angry.  Others are mildly bewildered.  Some people can't stop reading as more and more abuse piles up.  Some people sense a harassment campaign warming up, roll their eyes, and wander off.  Some people genuinely fear for their lives.  Some people find their attackers to be such worthless sacks of shit they can't take even scary death threats seriously.  Some people who react one way in one instance will do differently in another.  I've had all of these reactions at various points in my harassment-target-heavy career. And how people believe you must feel and how you do often differ greatly.

I learned that when I ran a bunch of hate mail I was getting in the wake of the Edwards fiasco.  What I felt, in doing that, was that this was an intellectual exercise in learning to have perspective.  I was being villainized as some horrible person because I made a few on-target and totally accurate jokes about Catholic dogma, but in fact the people who are the true nasty assholes are the right wing ideologues who sprung erections at the thought of having an excuse to unleash invective on a strange young woman whose main crime was uppitiness.  But I got an outpouring of sympathy from people, and while it was appreciated, it felt a little strange because I didn't feel like they assumed I must.  People assumed I must have been unnerved by all the hate mail, when mostly I was just irritated.  I was under no illusions that right wing nuts are nice people, so I wasn't surprised or even particularly upset.

Point is, it's hard to guess.  And when you're trying to monitor your public reaction to a harassment campaign, it gets even stickier.  Your main goal is generally to do what it takes to stop the harassment.  However, your harassers want any excuse to continue the harassment.  This makes choosing correctly harder than you'd think.  One reason that people elect "laugh it off" is that sometimes this is effective.  Your harassers want to get a rise out of you, and the hope is by not giving them what they want, they'll get bored.  Sometimes you feel that secrecy is protective.  Sometmes you fight back, hoping to scare them off.  The effectiveness of any choice is hard to gauge when you're making it, and it's basically at random.  Plus, you have a lot of people advising you on what to do, and it's often conflicting advice.

All we know is that Weiner is fucking up publicly in this, and that's easy for those of us on the outside to perceive.  But why isn't something we can know.  He could be guilty of what he's accused of doing.  He could be guilty of something else.  He could be totally innocent and just not perceptive.  But the notion that any of us can say with certitude what his reaction means is silly.  His accusers would be better off producing real evidence, and their inability to do this is the story here.