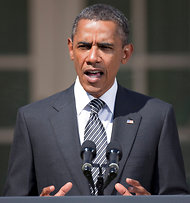 Atrios and Digby both commented on Cass Sunstein engaging in a light bout of hippie-punching in order to justify the Obama administration once again caving to Republicans, this time on environmental regulations that would have created jobs. Both cleaning up the environment and creating jobs are things that Republicans oppose—the latter so they can make frowny faces about unemployment and get elected, while also achieving the larger goal of increasing the gap between the haves and the have nots—so it was caving time.  And when caving happens, justification happens.  When justification happens, liberals on the internet get angry. Here's the rationalization quote:

This is irritating to me not so much because of the tedious hippie-punching so much as its total irrelevance.  The argument for increasing environmental regulations such as the ozone protections regulations Obama abandoned is that it actually creates jobs, not that regulations somehow are always job-neutral.  Sunstein is using the moron contingent that exists in any coalition as cover for this irrevelant puffery.

I'm not really a fan of the "no one says that" retort when Democrats hippie-punch, however.  I'm just a lowly writer and I get TONS of emails, tweets, etc. from braindead leftists who think politics is about proving how your pure your ideology is more than making evidence-based arguments, so I can just imagine what the Obama administration is getting.  You try to tell yourself under such a barrage that said people are just cranks who don't matter, subh sometimes they do get under your skin, and there they wait for a moment of emotional weakness, such as when you desire to rationalize your bad choices.  Politicians are human beings, and being human beings, they latch onto rationalizations for their choices like this.  It's a lot easier to imagine yourself as someone who rises about the powerless leftist morons who write you letters every day than to admit you caved into conservatives.  The former makes you look strong and nuanced, the latter makes you look weak. I strongly suspect the majority of people who get bent at these rationalizations would do the same in Sunstein's shoes.  Few of us just want to say, "I caved to pressure from my political opponents."

Which is, of course, what they did.  And have done and will continue to do because we're—as I've noted before—in a cycle where conservatives still have the rhetorical upper hand, though that is thankfully fading.  We all know that these ozone regulations would have created jobs, but that wouldn't have mattered much in the field of politics.  There will still be high unemployment after these regulations, and Republicans will blame the regulations, and the public—even non-conservatives—will buy it, because the myth that labor and the environment are opposed to each other was lodged into the American brain during the spotted owl crisis.  There's a lot of hard work we have to do to erase this myth, and that's all there is to it.  People believe explanations not because they fit the evidence at hand, but because they fit into preconceived models they have of understanding, no matter how foolish.  For instance, no matter how much you can get people to listen to germ theory and even agree to the scientific reality of it, the eagerness to assign moral causes to people's infections is still strong (and had a big influence on hostility to health care reform), which is why STDs are still spoken about in whispers and people still pray for someone's recovery, even though we can prove that being right with supernatural beings has no impact whatsoever on your health.  Which is why Dick Cheney is alive and Kurt Cobain is dead, but I digress.  Point is, the Obama adminstration's caving, while irritating as fuck, needs to be understood in the context of America's incredibly reactionary political environment.

I'm just not really a fan of individual, personality-based explanations for systemic problems like "Democrats caving".  We as a country would be better off if we stopped seeing politicians as leaders so much as ciphers.  Liberals could let go of the fantasy of a bold leader who will stomp Republicans into the ground and conservatives could perhaps start treating politics with the same empathy and nuance they tend to apply to their own lives.  You know, for example, the way they forgive themselves for their own abortions and have sex without apologizing.  They could maybe start giving others that thoughtfulness as well, instead of demanding leaders who "prove" how strong they are by kicking the crap out of the vulnerable.

Atrios has a question about Sunstein's comments:

I feel I can answer this one.  It's twofold.  The most immediate audience is the administration themselves, which is deep in rationalization mode.  There are a handful of extraordinary human beings who, under immense psychological pressure to put up a front, can describe themselves as someone who caves to the sorts of assholes who make up the leadership of the Republican party. But those kind of searingly honest people who never rationalize are far too rare to be the entire staff of a bobsled team, much less a presidential administration.  The other intended audience is the Beltway media, who eats this shit up.  I can understand why it's beyond most people to tell the people who shape the narrative of politics to take a long walk off a short pier, and instead much easier to pander to their prejudices so they like you.

Of course, I'm writing all this assuming that the wisdom inside the administration was that the regulations were a good idea.  I think that's a safe assumption, since they did initially offer them up.  If they were opposed from the get-go, I don't imagine they'd even put them on the table.

I'm sure what you're intending to ask me now is that if we don't get hepped up about the Obama administration's hippie-punching, what should we get hepped up about?  I think I've really answered that before—the conservative leanings and myths of our country.  Granted, undoing the systems that create these problems is a lot more effort than getting pissed at the symptom of Democrats caving, but I do think it's the only chance we even have at all.

A Wall Street Journal expose revealed that a Chinese businessman is under investigation by the FBI after he used funds to bankroll a media company with ties to a former aide to President Donald Trump, Steve Bannon.

"Federal Bureau of Investigation national security agents in recent months have asked people who know both men for information on Mr. Guo’s activities, including the source of funds of a media company linked to him that hired Mr. Bannon in 2018 as a consultant, the people said," according to the Journal. "As recently as last week, the FBI met with one person familiar with the companies tied to Mr. Guo, the people said. The probe has been underway for more than six months, and prosecutors from the U.S. Attorney’s offices in Manhattan and Brooklyn have been involved.

US Secretary of State Mike Pompeo on Wednesday welcomed Egypt's release of a US citizen but urged the ally to stop harassment of others.

Mohamed Amashah, 24, was freed Monday, nearly 16 months after he was arrested in Cairo's Tahrir Square for holding up a sign seeking the release of prisoners, according to human rights campaigners.

A dual US-Egyptian citizen who lives in New Jersey, he had gone on a hunger strike this year to protest his conditions.

"We thank Egypt for securing his release and his repatriation," Pompeo told a news conference.

"But at the same time, we urge Egyptian officials to stop unwarranted harassment of US citizens and their families who remain there," he said.

A network of more than 100 social accounts and pages related to former Trump adviser Roger Stone were removed Wednesday. The under the radar raid reportedly consisted of 54 Facebook accounts, 50 Facebook pages and four accounts on Instagram, a photo-sharing platform owned by Facebook.

‘When the Supreme Court hands down the decision about Trump’s taxes – read page 185’: Maddow says of new book

Joe Shapiro — the man who took Trump’s SATs for him

‘As bad as it gets’: GOP consultants have a secret admission about Trump — and a have a word of warning to ‘Lincoln Project’ Republicans

Kayleigh McEnany: When Trump said he wanted to ‘cut off’ school funding he meant he wants to increase it

Mike Pence: ‘The best expert I know’ on coronavirus school policy ‘is my wife Karen’