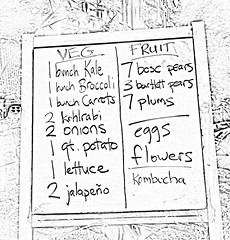 It's still warm and rainy, so it's slightly weird to see so many fall veggies showing up at the CSA, but it is what it is. The good news is a lot of them go well with the still-thriving summery herbs like basil that are growing on my patio. And I'm still getting plenty of tomatoes from the farmer's market.

The fruit share is really working out well, I've decided. We sometimes get overwhelmed by fruit, but it's really fun finding creative uses for it.  There are also non-creative uses that are equally excellent. Say I have to meet people for a late-ish dinner; on the walk to it, I can eat an apple to keep myself from getting faint and crabby, as is my unfortunate habit when I'm hungry. (Always has been. I don't know what that means, if anything.)

As you can see, I have a new photo filtering system called Be Funky. I'm breaking up with Instagram. 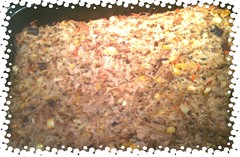 I had to do something with all these pears.  So I started by making this pear bread recipe.

I was feeling casserole-y, and I had eggplant and corn left over from the week before, so since I had the grating mechanism on the food processor out, I went ahead and grated the eggplant, some well-pressed tofu, and an onion, mixed it with garlic and the corn and some parsley and thyme (and salt and pepper).  I greased a lasagna pan, spread the mix around, mixed an egg with some milk, and just juiced it up with that.  Tossed it in the oven with the bread for 45 minutes. This is a technique known to home chefs everywhere known as “see what you need to use up before it goes bad, and cook with that”. Anthony Bourdain would sneer, I’m sure, but it’s quite economical.

I also like making breads and casseroles when I’m going out that night for a party or whatever. While it’s in the oven, I get a chance to shower and do my hair, and also to get most of the dishes done before we eat. Time economical! Plus, this recipe made two loaves of pear bread, so I was able to use one as a host gift. /thinking I’m turning into a housewife, except one who doesn’t have time.

After doing the dishes, I took the lettuce, cut up a pear, and made a green salad that I served with some sesame dressing I had in the fridge.

I had some mozzarella left in the fridge that I wanted to use up so I wouldn’t mindlessly snack on it, so I decided to use it with the potatoes.  I sliced up the potatoes, laid them in the Dutch oven with a little butter, salted and peppered them, added some various herbs, and then baked them for like 30 minutes with the lid on at 475.  I pulled them out, sprinkled the cheese on them, and put them in for like another 5 minutes to melt it.

I had a ton of broccoli from both having some already and from the CSA, so I decided to compress it all into broccoli soup.  I browned the broccoli and an onion, and then poured enough veggie broth to almost cover it.  I wanted it spicy, so I put a whole head of garlic, some ginger, turmeric, chili powder, and cumin, and the two jalapenos from the CSA.  When everything was good and soft, I blended it with the immersion blender, and added yogurt to make it creamy.

Served it all with some of that leftover pear bread. 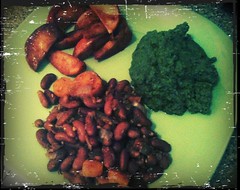 Made kohlrabi puree using this recipe.  Added basil, but left out the cream.

Cut up an onion and the carrots and sweated them a little with salt and pepper.  Added kidney beans, a bay leaf, veggie broth, and tomato paste.  Put in some thyme and sage from the garden.  Added wine and balsamic vinegar. Let it cook until the flavors married well.

Sliced some apples from last week, put them in a pan with cinnamon and honey, added a little water and lemon juice and cooked it until it was soft. 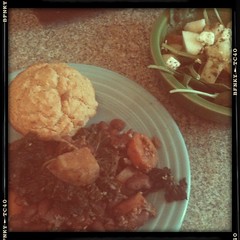 Made cornbread. I’ve been using Bittman’s recipe, which is dry, so I added like a ¼ cup of applesauce in it to juice it up.

Took the rest of the potatoes and the kale, cut it all up and put it in the skillet on the stove with some salt, pepper, garlic, chili powder, and thyme.  Cooked with veggie broth.  Added some leftover kidney bean mix from the last dinner.

Made a salad with spinach, some of the pears, and goat cheese.  I made a dressing based off this recipe, but added chives.

Trump has repeatedly spread Kirk's tweets to his followers.

The coronavirus toll in Italy shot past 10,000 on Saturday and showed little sign of slowing despite a 16-day lockdown.

The 889 new fatalities reported in the world's worst-hit nation came a day after it registered 969 deaths on Friday -- the highest single toll since the COVID-19 virus emerged late last year.

Italy now looks certain to extend its economically debilitating -- and emotionally stressful -- business closures and the ban on public gatherings past their April 3 deadline.

"Is it time to reopen the country? I think we have to think about it really carefully," civil protection service chief Angelo Borrelli told reporters.

Joe Biden has one key coronavirus question he wants answered: ‘Where are the tests, Mr. President?’

Despite the inability to hold campaign rallies, the 2020 presidential campaign is continuing in spite of the COVID-19 coronavirus crisis.

With the response to coronavirus being the top public policy discussion in America, all eyes are focused on President Donald Trump's actions.

Trump had promised the nation that he would set up COVID-19 drive-thru testing sites in the parking lots of big-box retailers but has so far failed to deliver.

‘Don’t be a cutie-pie’: Trump attacks ABC News for asking if he will provide enough ventilators

Donald Trump demands his own signature be on coronavirus stimulus checks to every American: report

Joe Biden has one key coronavirus question he wants answered: ‘Where are the tests, Mr. President?’

WATCH: Trump suggests he may impose quarantine on New York and surrounding states