Community and the awesomeness of elitism in the face of haters 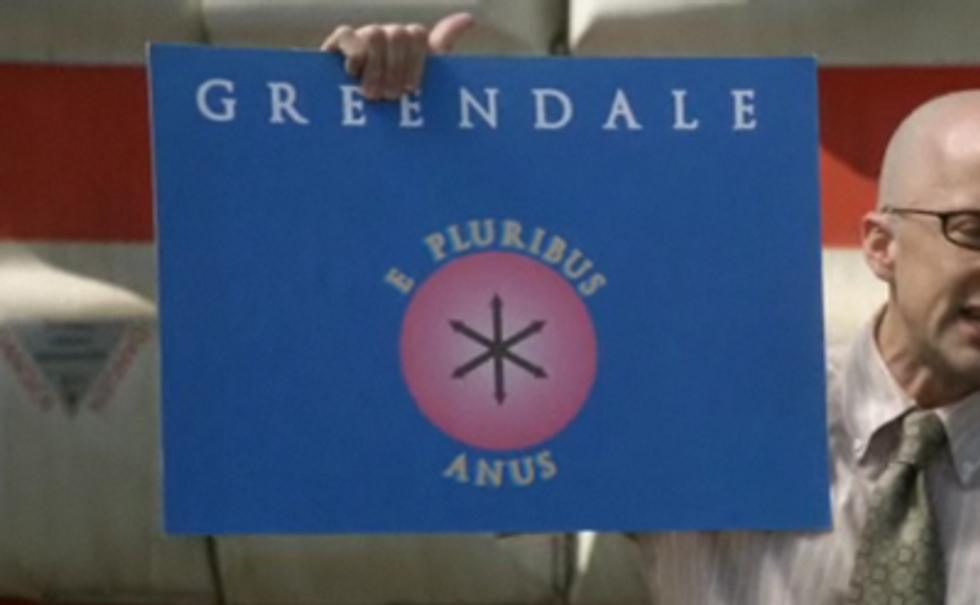 I really appreciated the humor and insight of this piece from Cord Jefferson on how he got it into his head that Community is a popular show, and so, even though he had never seen it, was as surprised as anyone at its sudden hiatus and no doubt cancellation. He points out that his online networks were positively obsessive about Community, giving him the impression that it's a big hit show, when it was turning over bad ratings for a network sitcom. He proposes a couple of reasons this might be that don't make sense at all---floating improbable reasons such as torrenting and there being some people who don't use the internet much but who watch TV---before settling on what I think is the sole reason that this happened to him:

While technology allows us to access news and opinions from hundreds of millions of diverse people around the world, the reality is that we cull our Twitter and Tumblr groups to match our sensibilities, just as we do with our offline friends. Many of the people I intentionally follow online like Community, and I made the mistake of assuming that my Twitter and Tumblr associates were a cross-section of America. Offline I'd never dare think that what my friends and I like is representative of everyone else's preferences. But on the internet, we've convinced ourselves we're seeing the world, while actually seeing tiny subcultures we've created around the same biases and preferences we have offline.

That last bit caused a small butthurt reaction in me---who are you calling "we", dude?---but I squelched because my life resolution is not to imitate the tedious culture of butthurtness of the internet that makes it hard to sift out legitimate criticism. It's clear that "we" is a rhetorical device, and a useful one at that, because he's probably right that this wasn't a minor brainfart of his, but a human tendency. I'd also point out that Cord may not make this assumption based off his real life friends, but that's more common than you'd think, as well. It's the "everyone else is just like me (and my friends)" phenomenon. I see it a lot when I'm blogging. I could write something like, "Women are generally socialized to be excessively apologetic", and I'm going to get a bunch of comments from women protesting, saying, "But I'm not!", not considering the possibility slightly that they could be an outlier. I can't really account for how hard it is for people in general to gauge where their tendencies or opinions fit on a spectrum, but it is a real phenomenon, and I can see how the internet makes it worse.

So I'm pretty sure I'm somewhat unusual in that I didn't really relate to this piece, not because it isn't true---it is!---but because I'm probably a weirdo. I not only don't think my tastes are an indicator of broader American tastes, I'm fairly convinced that if I like something, the majority of Americans don't. I call it the "mediocrity rules" phenomenon, after the kickass Le Tigre song that perfectly describes it, right down to the incuriosity and outright fear of difference that keeps most people preferring the safe and uninteresting to the daring and truly creative. There are exceptions to every rule, but in general, being truly interesting requires taking risks, and most people are risk-averse, especially when it comes to entertainment, which they look to as a way to soothe instead of challenge themselves. I mean, I look to it to be soothing, too, but since I have a weird personality, pablum gives me gas, so it's not soothing at all. I'm not alone in this, but those of us who enjoy a little riskiness in our entertainment are simply less common than those who don't.

This is how it just is, and until a few years ago, this was never presented to me as a problem, not really. I mean, I had a kid snarl at me in high school that I was a "New Waver", which didn't hurt my feelings so much as make me wonder how someone who was probably born in '79 or '80 and found anything that had even a whiff of hipness to it alienating learned that term and used it in 1994.  But in recent years, I've felt a shift in the zeitgeist. It's just a hunch, but it feels like the belief that mediocrity, by dint of being "populist", is somehow more pure and honorable for it. Terms like "elitist", "snob", and the dreaded "hipster" are flung around with zeal. I suppose that was always true, but now people who do that aren't just implying that you're a weirdo for having certain tastes, but that you're somehow morally inferior because you aren't one with the people or some such crap like that. It seems that mediocrity is literally beginning to rule. This Tracy Jeanne Rosenthal piece on excreable Lana Del Rey is a good example; it's all sneer at "hipsters" for disliking Del Ray for being "inauthentic", as if there's a monolithic hipster view of authenticity and monolithic hipster hatred of pop music, both of which are easily disproved by a trot through the various rock clubs of Williamsburg that feature more than their fair share of gleeful love of pop-ness as a concept. Could it just be that Del Rey sucks? Not all pop music sucks; I hardly imagine you'll meet many hipsters who denounce Prince simply because he's pop. It is true that there's a streak in indie rock of mistaking quiet for quality and earthy for deep, but it's a little more complex of a problem than simple rejection of anything "pop", nor is it a monolithic tendency. Some music snobs (*cough*) dislike that trend strongly, but we're not going to conflate it with old-fashioned elitism, which still has value. If anything, a lot of it is less elitist, more like making indie music for people who stopped caring when they had kids. Elevating something as better for garnering mass appeal by being mediocre pablum isn't any better than disliking something just because it's popular, and it may be worse in a way because you have to endure a lot of stuff that just sucks.

Or maybe I'm overreacting to a tendency that's simply common on the internet, where a few loudmouths who have a vendetta against the risky, the cool, and the bohemian have had an outsized effect on the conversation and caused everyone to tiptoe around the commonly accepted idea that white bread is an insult for a reason.

Anywhere, here's hoping that "Community", a show that has really been fun to watch take a number of risks without a net, at least gets to finish out this season in style instead of simply being yanked without any kind of closure, as Britta might say.