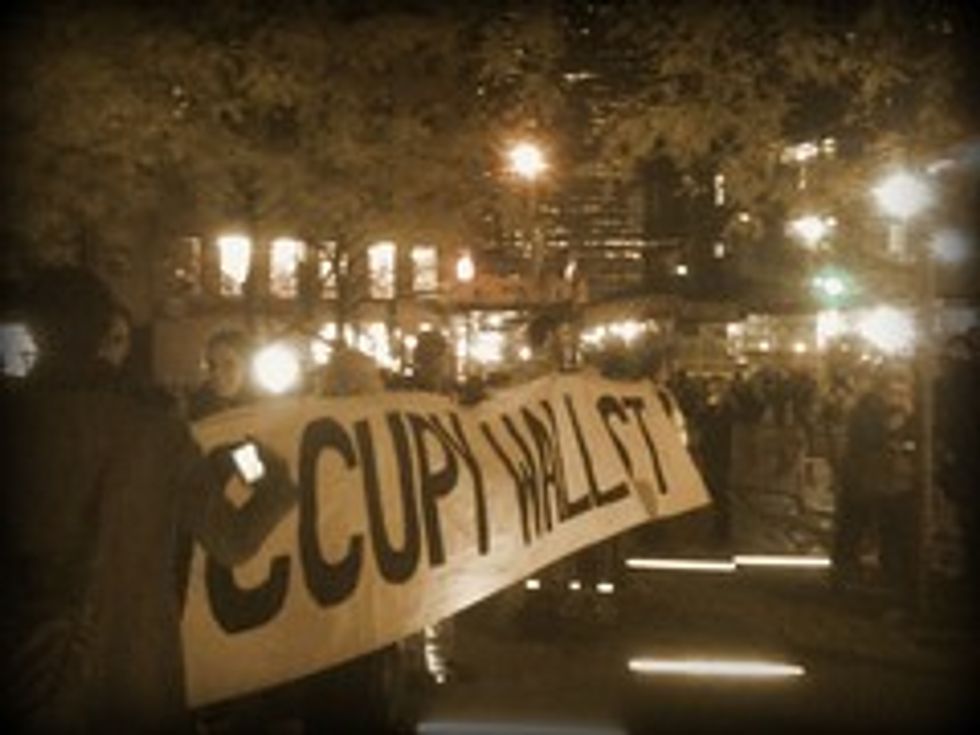 Samhita from Feministing and  I are doing a weekly chat podcast for our friends at Citizen Radio. This show will be completely different from my weekly podcast at RH Reality Check, which has a more NPR-style news and opinion format. (By the way, RH Reality Check is having a fund-raising drive. Since they're the best source of reproductive rights news on the internet, please consider chipping in and supporting them.) This new podcast is going to be more freeform and chatty, much like Citizen Radio. It's called Opinionated and we have a cat for a logo. You can check out the first episode here. We discuss the library situation at Occupy Wall St., which has since been updated with news that at least some of the books survived. It remains to be seen this morning what the return of the library to protesters will look like.

Speaking of Occupy Wall St., I went out there last night to re-donate my book and take some pictures/show support (I would have re-donated others if I'd had second copies, but I only have, for obvious reasons, multiple copies of my own), and was thrilled to both meet commenter rowmyboat, who is working as a librarian, and to find out how frigging organized they are with the People's Library. They were entering ISBN numbers on an iPhone, presumably so they could be registered on this database. You can look around and see if there's holes in their collection of books that would be useful to their cause and donate here, if you're not able to get down there. If you are able to get down there, they 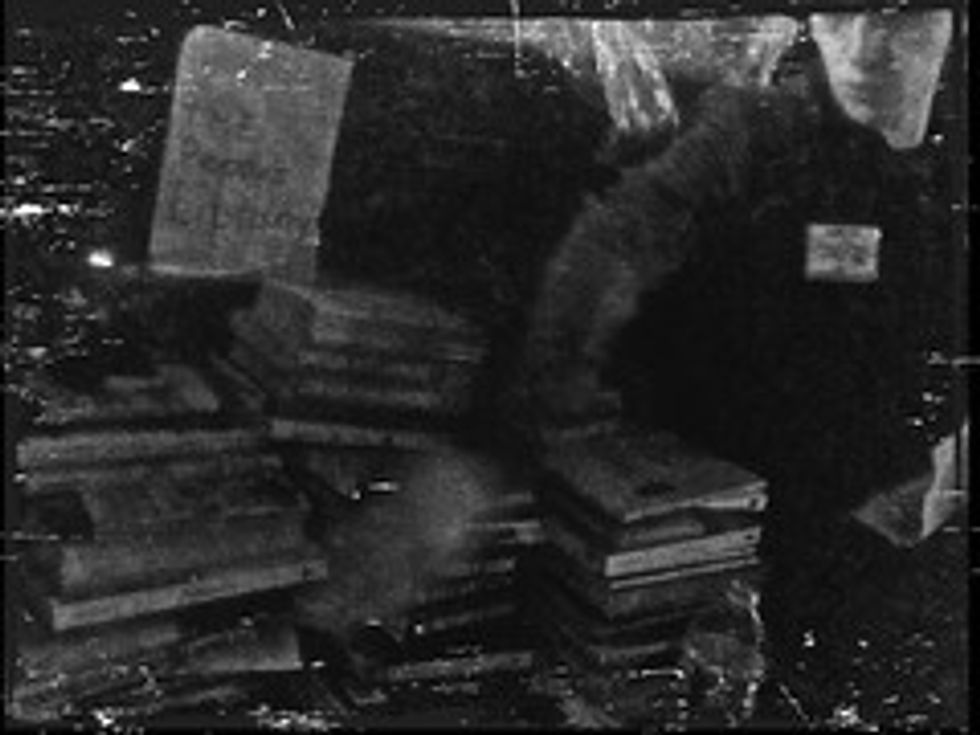 need help retrieving books from the storage facility that is holding them. I know we all look forward to hearing about how well the books survived the raid, as well as hearing about the other stuff that was confiscated. My friend Darcy was tickled to have contributed the first copy of No Logo to the rebuilt library.

*People were in surprisingly high spirits, though there was still lingering ill feelings about the raid. I think the combination of adrenaline, thrill at surviving, and disgust about what happened is easy enough to understand. People showing up who were released from jail still seemed shell-shocked.

*The crowd was heaviest around 8PM, probably around 1,000 people. We left and came back after a couple of hours, and it had thinned considerably, but the General Assembly was still going on (and probably the reason that the crowd thinned, honestly. The work they do is important, but it's also hard to sit through.) 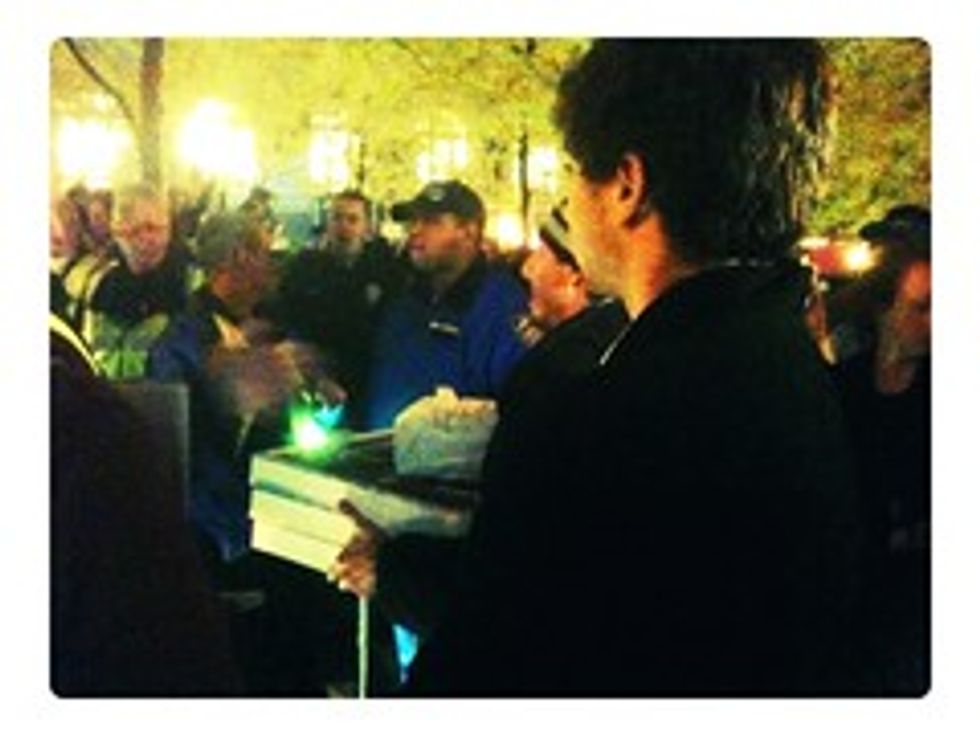 *The police strategy for keeping people from rebuilding their camp was, as you can imagine, controversial. They barricaded most of the park and were searching anyone with heavy bags to make sure they weren't smuggling in tents, sleeping bags, or blankets (though some people did get in with blankets). Some times they seemed to think food was banned, and some times they let it in. People yelled at them for doing this, and it seemed to bother most of the police tremendously. In fact, I would say the most relevatory thing to me was the way the police were behaving. Most of them seemed genuinely  unhappy that the city was using them as schoolyard monitors to harass the hippies, who are, after all, advocating for police economic rights along with everyone else. When accused of being fascist, they seemed less pissed and more hurt, at least the ones I saw, though I'm sure some cops get off on pushing hippies around. Some cops were quietly supportive. Two separate officers went out of their way to help us find our way into the park, and I saw at least one cop engaging the protesters in a friendly fashion as they explained their views. 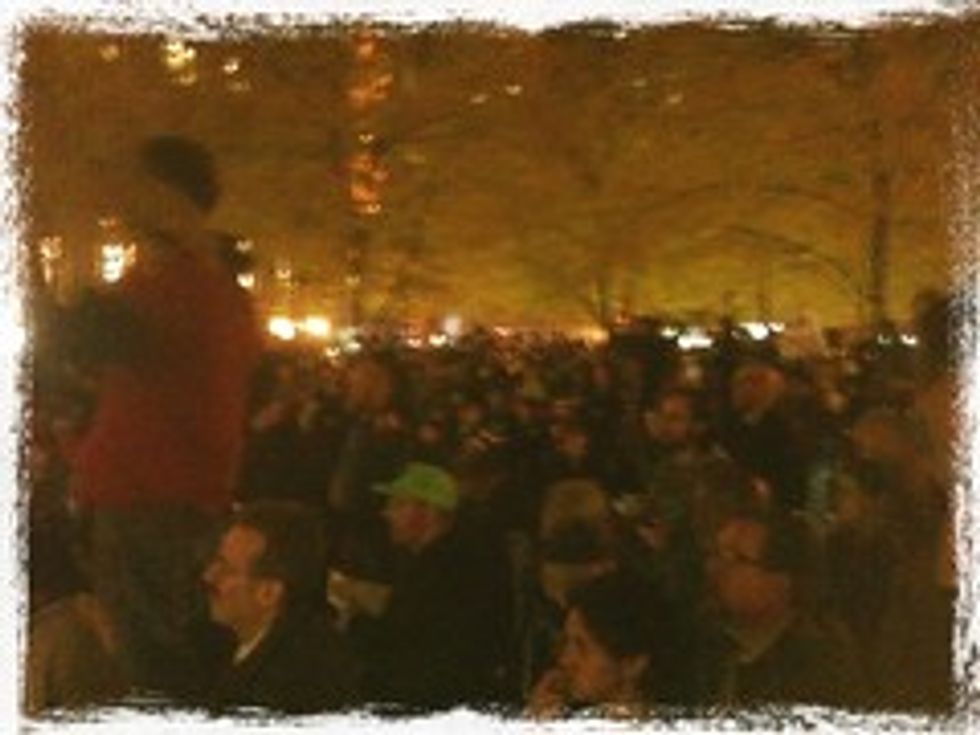 *Funniest exchange heard all night, when there was yelling because the cops started getting aggressive about bag searching. Protester 1, at cop: "Nazi!" Protester 2, at Protester 1, "Don't say that. He may be a fascist, but he's definitely not a Nazi." Real life Godwinning! Also, I suspect from the cop's reaction to this that he is neither.

We left before it even really came close to the point where questions would be asked about camping out. In my time there, no one even talked about it, honestly. I haven't heard word yet about what they eventually did.

I was on Bloggingheads with Erica Grieder yesterday, and we talked about the raid:

I'm not sure why people are acting like there's a debate over whether or not it's good for the cause to have a political crackdown like this. From what I understand, the whole point of non-violent protest is to provoke authority figures into showing their true colors, and garner sympathy for your cause.