Believers believe, yes, but because they want to 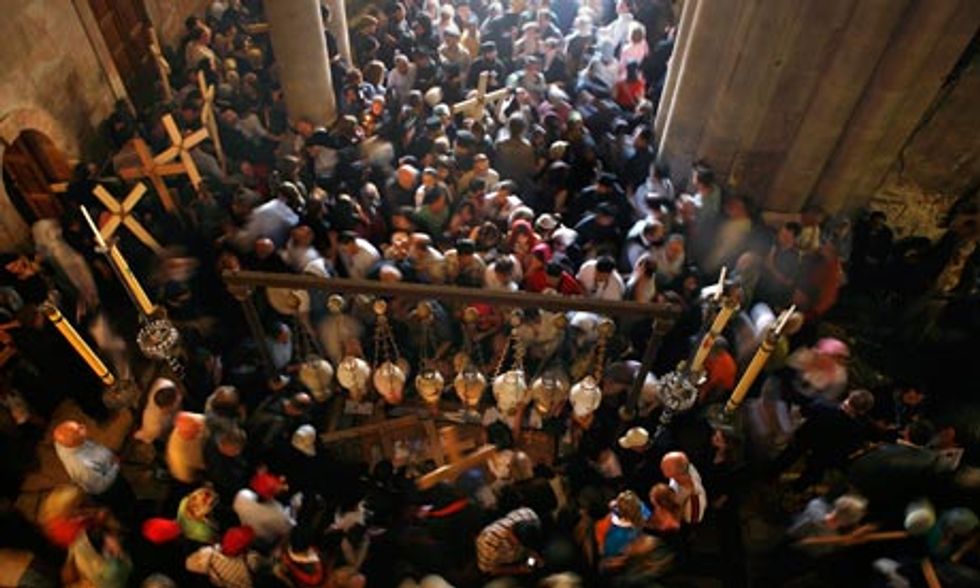 PZ has a blog post up about new research showing---no big surprise---that religious people actually believe in all that magic stuff they say they believe in. I wasn't aware that this was controversial, but then again, I've met people who sit around reading religious texts where others can't see them, which I figure is the most relevant measure.

Julian Baggini discovers that believers believe. Baggini is an atheist who has in the past sniped at the New Atheists a fair bit; he’s argued that we’re an uninformed bunch who rail against straw man theism, because, he has argued, most practitioners of religion are followers of practice, not belief — they go to church for ritual and community, and all the dogma is dispensable. Now he has surveyed a few hundred believers, and learned that they actually do think the superstitious stories they have been told are very important.......

I think I’d call this the Atheist Delusion. Many of us find it really hard to believe that Christians actually believe that nonsense about Jesus rising from the dead and insisting that faith is required to pass through the gates of a magical place in the sky after we’re dead; we struggle to find a rational reason why friends and family are clinging to these bizarre ideas, and we say to ourselves, “oh, all of her friends are at church” or “he uses church to make business contacts” or “it’s a comforting tradition from their childhood”, but no, it’s deeper than that: we have to take them at their word, and recognize that most people who go to church actually do so because they genuinely believe in all that stuff laid out in the Nicene Creed.

Since this is a both/and blog, I thought I'd split the baby here.  It is both true that believers believe, and that they participate in religion for social reasons. I don't see these things as mutually exclusive. It's one of the unfortunate tricks of human psychology that we believe things in no small part because that's what we're expected to believe, or because we want to believe. Which are kind of the same thing, actually. People want to believe what they're expected to believe, because that makes it easier to get along. You aren't in conflict with others because of your beliefs, and you get all sorts of social rewards. The fear of losing that causes people to banish doubts about their beliefs when they creep into their mind. Some people are outliers, and just habitually question common wisdom, but not most people.

It's not just religion where we see this. It's not a coincidence that conservative ideals are concentrated in some communities and liberal ones in others. It's not just that people seek out like-minded people, though that is part of it. It's also that people tend to go along with the prevailing wisdom.

Let's think of a relatively small example of how this works. Say, you're living in a conservative community and getting married. Your inclination is to keep your name, because it initially seems like the most logical option. It will cause less strife in your professional life, make it easier for people to find you on Facebook, and help you avoid excessive paperwork. But then the pressure starts. It might not be overt; your fiance may just look disappointed and say in a despondent voice, "Well, if it's what you really want." Your friends look startled, as if you're a freak. Your soon-to-be in-laws wonder aloud how you're going to name the children. Your mother calls and says that it would be nice if you weren't rubbing everyone's noses in what a feminist you are. Eventually, the strife gets to be a bit much. You start to think that it would just be easier to change your name. Once you've made the decision, being a human being, you start to rationalize it. You say, "My husband told me it was my decision, and it was! I wanted everyone to have the same last name. I don't like my last name anyway."

The word "rationalize" has unpleasant connotations, but in fact, most people rationalize most decisions most of the time. For instance, I chose to grab the Nation magazine instead of the American Prospect on my way to the gym today. God only knows why. The real reason was probably beyond silly; maybe it was just closer to my hand and I was distracted. But as soon as I picked it up, I said to myself, "Huh, the articles look really interesting today. They are covering something I'm really in the mood to read." I suspect I would have found the Prospect just as interesting if I'd grabbed it instead; I do like both magazines a lot.

The problem with rationalization is that it gets intense when the stakes for abandoning a decision are high. If I read the Prospect tomorrow and find I like it better, nothing is lost. I may even forget that I made a decision at all. But if I changed my name, and someone challenged that, my sense of self-esteem (I like to think of myself as an independent person, as do most), would be threatened. So would the estimation of my husband as a non-selfish spouse who puts my interests ahead of his male entitlement. So I double down with my rationalizations, to avoid cognitive dissonance. With religion, the stakes are really high for a number of people. Their family, marriage, sense of self, and community may be entirely built on it.

So, perversely, New Atheists and the critics of them are both right. We need to understand that people believe because of social pressures. But that doesn't mean we should shut up when criticizing religion. Loud criticisms of religion aren't going to be effective on most people who have a lot invested in religion, but they are incredibly effective on people who have little investment. I use myself as an example. I never went to church as a kid, not really. I was never confirmed. My parents told me to believe whatever I wanted. The few times I went to church, I found the process and people alienating. So when I was presented with atheist arguments, I had no reason to reject them out of hand. Other people I've spoken to were very religious and came around, and it's usually because they had an alienating experience with religion that made them more open to atheist arguments. By making direct, logical arguments against religion and gods, atheists create opportunities for people who have low investment in religion or a crisis in faith to come around. But we'd be mistaken if we didn't think that social pressures played a major role in this, and also sought ways to relieve those pressures on people, so they don't feel they need to believe.