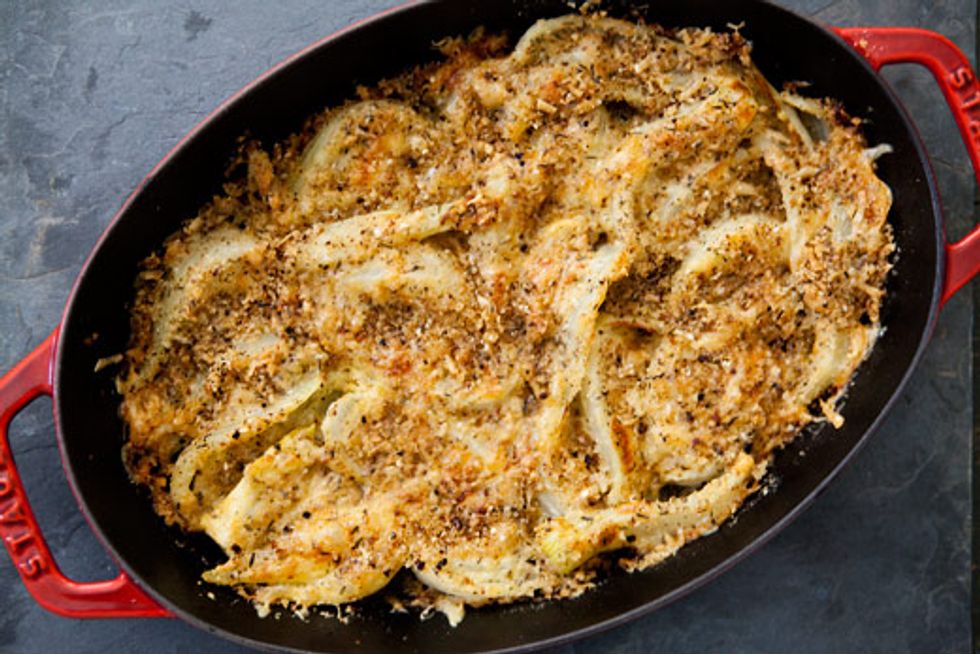 Well, the CSA (for those who don't know, that stands for community-supported agriculture) ended last week (sorry I forgot to mention that in the post), and I'm a little bereft. It's funny. A lot of people fear getting into a CSA because they worry about getting "weird" vegetables they don't know how to cook, and fear they'll fail at meal planning. But once you get into the swing of it, a CSA actually makes meal-planning easier, because it narrows your options down. You're standing there saying, "Well, whatever I do, I have to make something with this kohlrabi." When it ends is the hard part. Now you're standing there having to plan meals and you have no guidance whatsoever. Sometimes I go to the farmer's market and buy up a bunch of random stuff, but it's not the same. Part of it is that I'm trying hard to strike a balance between eating the seasons/eating locally and not spending way too much time on meal planning, and that can get hard.

One thing that helps is the internet. The internet helps when you're in a CSA, because you can just plug ingredients into a search engine---often just Google---and get tons of recipes back. It makes it fun to mix and match stuff, just to see if it'll work. (Do a "let's see, I have some apples and some sweet potatoes, now voila! I have a casserole.) But without the CSA, I find myself spending more time reading blogs and bookmarking stuff I can shop for. Since blogs are trying to be relevant, they often fall into seasonal recipes, even if they're not trying to do a local/seasonal thing. Because they're foodies, they can often push you towards cooking with unusual ingredients that you might not have tried on your own, just as a CSA does.

Here's some of my regular go-to places for recipes:

Simply Recipes: the best for diversity, ease of use, and comprehensiveness. Elise Bauer also updates regularly, so you're never wondering if she's got something new to be inspired by. It's not vegetarian, but it has a lot of vegetarian recipes. At the top is a post praising fennel, so you know she's not screwing around.

A Veggie Venture: More sporadic, but when they do post, it's usually got tons of useful information. They are also just seasonal-esque by habit, like Simply Recipes. Right now, the top post is a list of sweet potato recipes, for instance.

Chop Bouie: Friend of the blog Jamelle Bouie has a Tumblr where he records some stuff he cooks. It's less a traditional recipe blog, and more just a matter of inspiration, but I find it very inspiring. He's not a vegetarian, but he does the sometimes-vegan thing, so there's some ideas there.

101 Cookbooks: A vegetarian blog that updates infrequently, but when they do update, it's a doozy. The blogger loves offbeat recipes, and has been known to cull them from vintage cookbooks. Good times.

Recipes for Health: One of the NY Times food blogs, but don't let the mainstream nature of it cause you to back away. Martha Rose Shulman is an adventurous cook with an eye towards health, ease, and often the exclusion of meat. She tends to put up five or six recipes linked by a single ingredient at a time, and it's usually at the height of the season. So perfect for seasonal/local eating.

Smitten Kitchen: Being a some time vegetarian is all the rage now that foodie-ness is overlapping with environmental concerns about sustainability. It used to be hard for vegetarians to read recipes from non-vegetarian sources, but a lot of food blogs now will go weeks at a time just putting up vegetarian recipes (or ones that can be tweaked easily). Bloggers are taking to heart Michael Pollan's food rule: "Eat food, not too much, mostly plants." I find that's the case with this marvelous little blog.

Post-Punk Vegan Kitchen: The world of vegan cooking and vegan products puts me off, because a lot of it violates the "eat food" rule. Since the principle is to avoid animal products, concerns about overly processed or junk food tend to rate second, if they register at all. Too many fake meats and sweets, for instance. While this blog falls into that trap on occasion, however, she's really been moving away from that and towards a form of cooking that emphasize ingredients and de-emphasizes trying to mimick the toxic standard American diet. I get a lot of ideas from here.

What are some of your favorite food blogs?