Anti-choice faux embrace of single mothers a victory for feminists 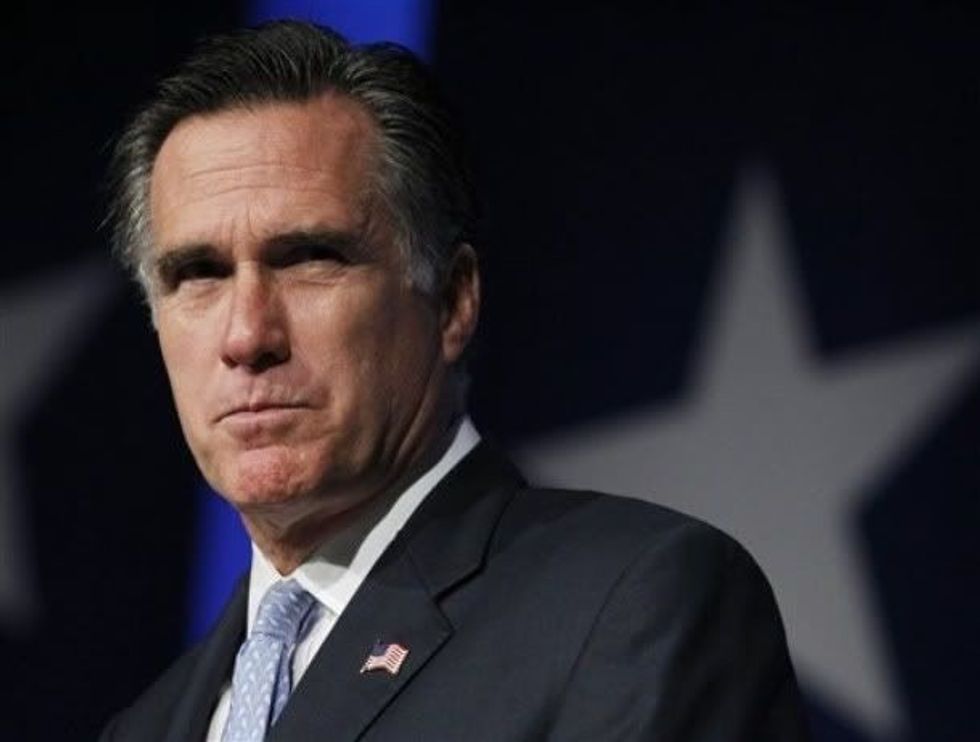 This story is definitely flying around feminist circles. Michael Kranish and Scott Helman, two investigative reporters for the Boston Globe, have published an excerpt from their new book about Mitt Romney in Vanity Fair. In it, they tell the story of a woman who was in Romney's church and when she was pregnant with her second child---while single---Romney, acting as a bishop, paid her a visit. He then pressured her to give up her baby for adoption, which she most adamantly didn't want to do.

Hayes was deeply insulted. She told him she would never surrender her child. Sure, her life wasn't exactly the picture of Rockwellian harmony, but she felt she was on a path to stability. In that moment, she also felt intimidated. Here was Romney, who held great power as her church leader and was the head of a wealthy, prominent Belmont family, sitting in her gritty apartment making grave demands. "And then he says, 'Well, this is what the church wants you to do, and if you don't, then you could be excommunicated for failing to follow the leadership of the church,'" Hayes recalled. It was a serious threat. At that point Hayes still valued her place within the Mormon Church. "This is not playing around," she said. "This is not like 'You don't get to take Communion.' This is like 'You will not be saved. You will never see the face of God.'" Romney would later deny that he had threatened Hayes with excommunication, but Hayes said his message was crystal clear: "Give up your son or give up your God."

It's a believable story, even though the church denies that they prescribe excommunication for the "sin" of single motherhood. After all, it sounds like he didn't phrase it to her that way, more more as a matter of disobedience. More to the point, I can see Romney, who is an imperious fuckhead, getting rapidly frustrated that this woman didn't immediately give in to his demands, so he could wrap up his church duties and return to his beloved business of cannibalizing other businesses and putting people out of work. Or whatever it was he had to do that day. Either way, I don't imagine he thought much of some woman low on the totem pole talking back to him instead of just doing what she was told. In frustration, bringing up the possibility of excommunication to get his way? Totally plausible.

(It's worth noting at this  point that Jezebel is right that his behavior, if true, is beyond the pale.  But from what I understand, Mormons don't believe in hell, per se, so perhaps this threat isn't quite as dire as when it's made by Catholics using the threat of god's punishment to control women's reproductive choices. It's like only 99.9% evil instead of 100% evil. But any Mormons or former Mormons are free to 'splain in comments.)

What's interesting to me is that the Romney campaign is denying the story. This is interesting to me, because it suggests that even out-of-touch Mitt Romney realizes that pressuring a woman to put a baby up for adoption has become politically toxic. This is an interesting and positive development, if that is in fact his concern.

For as long as I remember, the anti-choice movement has heralded adoption as the "perfect" alternative to abortion, usually accompanies with platitudes like, "Abortion is never the answer." They implied that growing a baby for 9 months, giving birth, and then simply giving the baby to a "deserving" couple and walking away like it never happened was really not much harder than getting an abortion, and anyone who disputed that was just being selfish. The argument demonstrates the fundamental refusal of anti-choicers to see women---all women, even sexually active ones (aka, most women)---as full human beings. The value of women's labor, and the suffering that women reported was a common side effect of giving a baby away? Waved off, because they quite literally don't see it as mattering. Women are basically breeding animals in their view, and just like you don't ask your breeding dog if she wants pups when it's time to bring the stud around, you certainly do't worry if the women you see as stupid sluts get their hearts broken producing babies for "deserving" couples. You even take umbrage at the idea that women should be compensated for their labor with money.*

For whatever reason, however, the coldness of this point of view has suddenly become apparent, and anti-choicers are scrambling to seem a little less heartless. I mean, they aren't becoming less heartless---their view is still that women who have sex outside of marriage deserve no better than to be forced to bear children and then to have those children taken away from them---but they are beginning to realize that they should probably at least pretend to support other options besides shotgun marriages and giving the baby up for adoption, if they want to present the false image of caring about women. That's why they occasionally make a big fuss over a single mother like Bristol Palin (while of course mindlessly condemning most single mothers who aren't white, wealthy, and Christian-identified). It's about creating the image that they will take single motherhood as a lesser of two evils, because they know their absolutist view of "get married or give it away" isn't flying with the public as much anymore. This feigned support for women who choose single motherhood over abortion is all smoke and mirrors, of course, since the Christian right by and large still doesn't support any social programs that would make raising a child by yourself easier, but that they feel the need to pretend to support single mothers is an interesting development.

Romney's denial suggests that he gets that. The aggressive attacks on single mothers makes it incredibly clear that the opposition to abortion is not about "life", but about patriarchal power and controlling women's reproductive capacities.That anti-choicers have to tone down the sexist aggression, at least for P.R. reasons, is a victory for feminists. While it's frustrating that they pretend to uphold our belief that women are valuable while pushing legislation to relegate women to second class status, it's interesting that our values are so ascendent that they have no other choice. Which, of course, is all the more reason to keep these older stories of women being coerced and threatened into giving babies up for adoption in the public eye. Antis shouldn't be allowed to hide their point of view on this so very easily.

*Yes, yes, I get that there are women who give babies up and walk away and it's not a big deal for them. But that's surprisingly rare. The evidence for this contention is that after maternity homes, which were basically places where pregnant women and girls were made to believe they had no choice but to give up their babies, were shut down, the number of healthy, adoptable babies on the market plummeted. Meanwhile, there was a concurrent rise in the rate of single motherhood, which indicates that it's not legal abortion that really did the adoption market in, but women keeping their babies. In fact, the difficulties white Christian couples have in finding white, healthy babies to adopt is one of the reasons the anti-choice movement is so extreme: They want to restore the supply side, by force, if necessary. Which it appears to be.