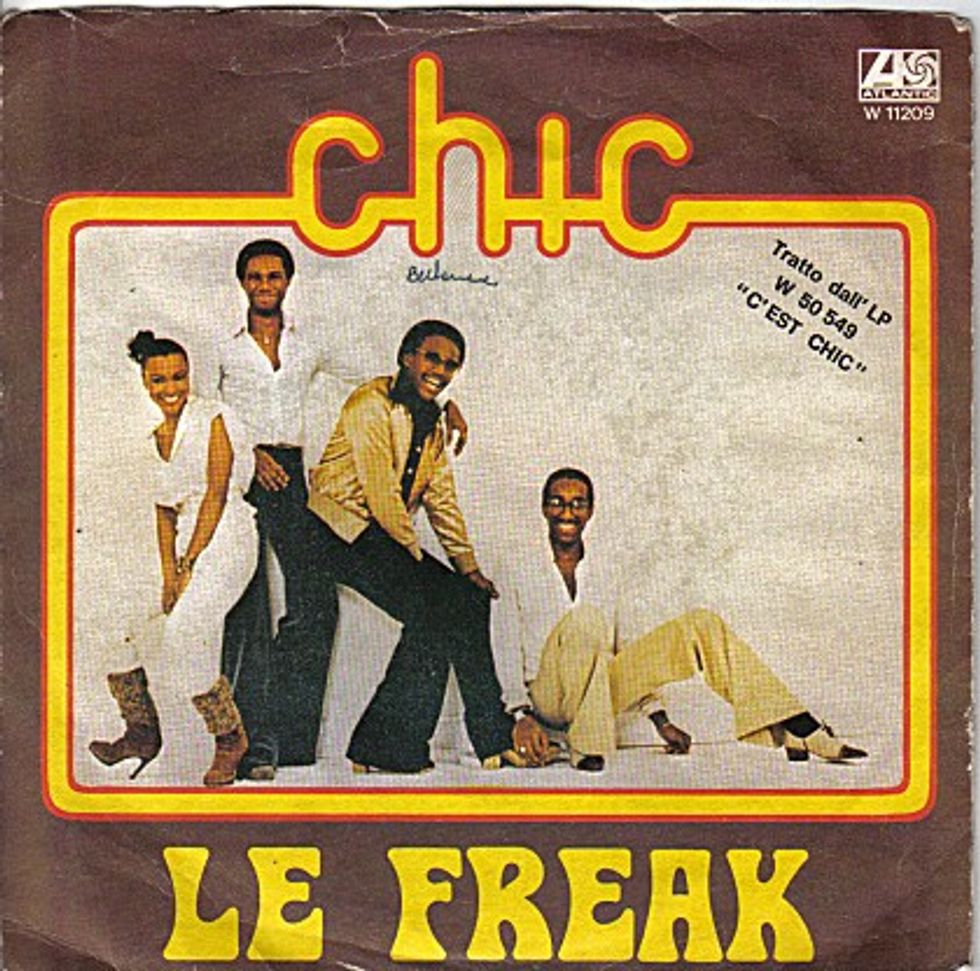 This week, in anticpation of the upcoming WAM Prom on Friday, I'll be blogging some thoughts on music and culture by the way of our mash-up theme of hip-hop and disco.

As regular readers know, I firmly reject the popular history of disco, which claims that it was a value-free trend that the nation was best rid of, in favor of the increasingly popular and often better-researched history that demonstrates that it was an interesting and vital musical form that helped give birth to New Wave, post-punk, techno, and of course, hip-hop. Stating this claim publicly, I've learned, especially if you note some of the racist and homophobic underpinnings the straight white male-dominated "disco sucks" movement, gets you a lot of angry pushback. Usually people engaging in it cherrypick their evidence, citing the soulless crap side of disco, such as "The Hustle" or the Village People, as evidence for their contention that disco was simply worthless and there's no deeper story to why it got so violently rejected. The problem with that argument is that yes, 90% of disco sucked, but as Sturgeon's Law states, 90% of everything is crap. Since the vibrancy of everything from science fiction to rock music is usually judged by the 10%, I demand that disco be held to the same standard.

With that in mind, let's talk about Chic. Chic is one of the most famous disco bands of all time, but even if you know them, you probably don't know how broad or deep their catalog really is. The band was the brainchild of Nile Rodgers and Bernard Edwards. They formed in 1976 and disbanded in the early 80s. And it's really hard to imagine what popular music would sound like today without their influence.

Let's start with the songs they're most famous for, "Good Times" and "Le Freak". As noted on Wikipedia, their seamless blending of rock and disco on these tracks was inspirational to people from all corners of the pop music world. Blondie, Queen, and Daft Punk have all borrowed from "Good Times", but its biggest impact was felt on hip-hop.

It's been sampled in roughly one billion rap songs, but the most famous is probably still "Rapper's Delight" by the Sugarhill Gang.

But while their work under the banner of Chic would have been enough to secure their place in music history forever, Chic did so much more than that. Edwards and Rogers were in it to win it when it came to writing and playing disco. They're the engine behind Sister Sledge, for instance.

And for Diana Ross in her disco phase. Yep, you have Chic to thank for "Upside Down"

For which MC Lyte was no doubt grateful:

And also behind Diana's massive hit that has become a gay anthem "I'm Coming Out":

Which in turn worked out pretty well for Biggie Smalls:

If it were just Chic, that would be reason enough to laugh off the notion that disco sucks and offered the world nothing but soul-destroying mediocrity. But there's a lot of stories like this, if you do a little digging. For instance, there's the strange and forward-thinking "I Feel Love" by Donna Summer, which was produced by Giorgio Moroder , and so impressed Brian Eno that he said to David Bowie, "I have heard the sound of the future." Bowie went on to work with Moroder on "Cat People (Putting Out Fire)", a song that was famously featured in Quentin Tarantino's "Inglourious Basterds". Or take the case of Sylvester, a gay icon and one of the singers who helped push disco closer towards the house sound with a mutation called Hi-NRG. And, of course, pure disco sound has a few artists who are still holding the torch, to great effect, like New York's Escort or Jhameel.