A business ethics survey published this week reveals a startling trend: workers and management report more unethical behavior when the market climbs, and less as times get tough.

And perhaps more startling yet, the number of respondents who reported witnessing illegal corporate political donations has risen by 400 percent since the last survey just two years ago, even as reports of misconduct hit an all-time low.

Just 1 percent of survey takers said in 2009 that they'd witnessed illegal political donations. That number jumped to 4 percent in 2011, according to the National Business Ethics Survey (NBES), sponsored by companies like Walmart, Altria, BP, Raytheon, Aetna and Lockheed Martin, among others.

On the plus side, the survey also found that the number of employees who said they witnessed misconduct on the job has reached an all-time low of 45 percent. That number was 10 points higher in the group's 2007 survey.

On the other hand, the NBES also found that the number of companies described as having "weak ethics cultures" has shot up, going from 35 percent in 2009 to 42 percent in 2011.

And that one plus, might not actually be a plus at all: the survey also compared historical rates of observed business misconduct with the average monthly S&P 500 index score, going all the way back to 2000. It found that when observed misconduct goes up, so does the market, and vice-versa. 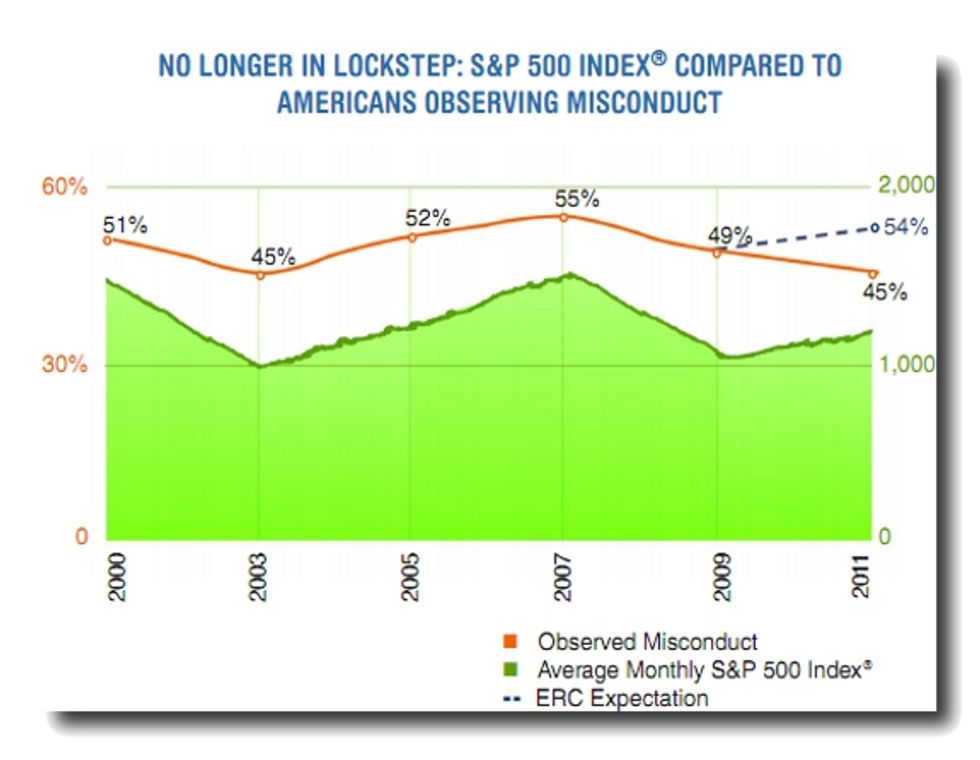 It's not clear what that correlation means exactly, but the historical trend does not go unnoticed in the 2011 NBES.

"Historically, when the economy is good, workplace ethics tend to suffer: profit takes precedence over proper behavior," the survey explained. "While the economy has improved since the 2009 NBES, the recovery has been uneven. Many Americans have seen encouraging signs of recovery at their workplaces, but they have not necessarily felt that improvement personally. That uneven quality is reflected in the 2011 NBES results."

That might also explain why researchers noticed a disconnect in 2009, when the market roared back but observed misconduct continued to fall.

Another possible explanation is that companies are placing more emphasis on ethics training that ever before, according to Patricia Harned, president of the Ethics Resource Center, who spoke to Roll Call about the survey.

It could also be that more misconduct is being reported by employees, which was at a record high in the 2011 survey at 65 percent, up 12 points since 2005.

But that too is not without a backlash. With more workers calling out misconduct, there are more whistleblowers to retaliate against -- and that too is up sharply, going from 12 percent in 2007 to 22 percent in 2011.

The types of relatiation most often reported in 2011 were being excluded from decisions or workplace activities, being ignored by fellow employees, being verbally abused by management, nearly being fired or being passed over for promotions.

"As the economy gets better – and companies and employees become more optimistic about their financial futures – it seems likely that misconduct will rise and reporting will drop, mirroring the growth in pressure and retaliation that have already taken place and conforming to historic patterns," the NBES noted.