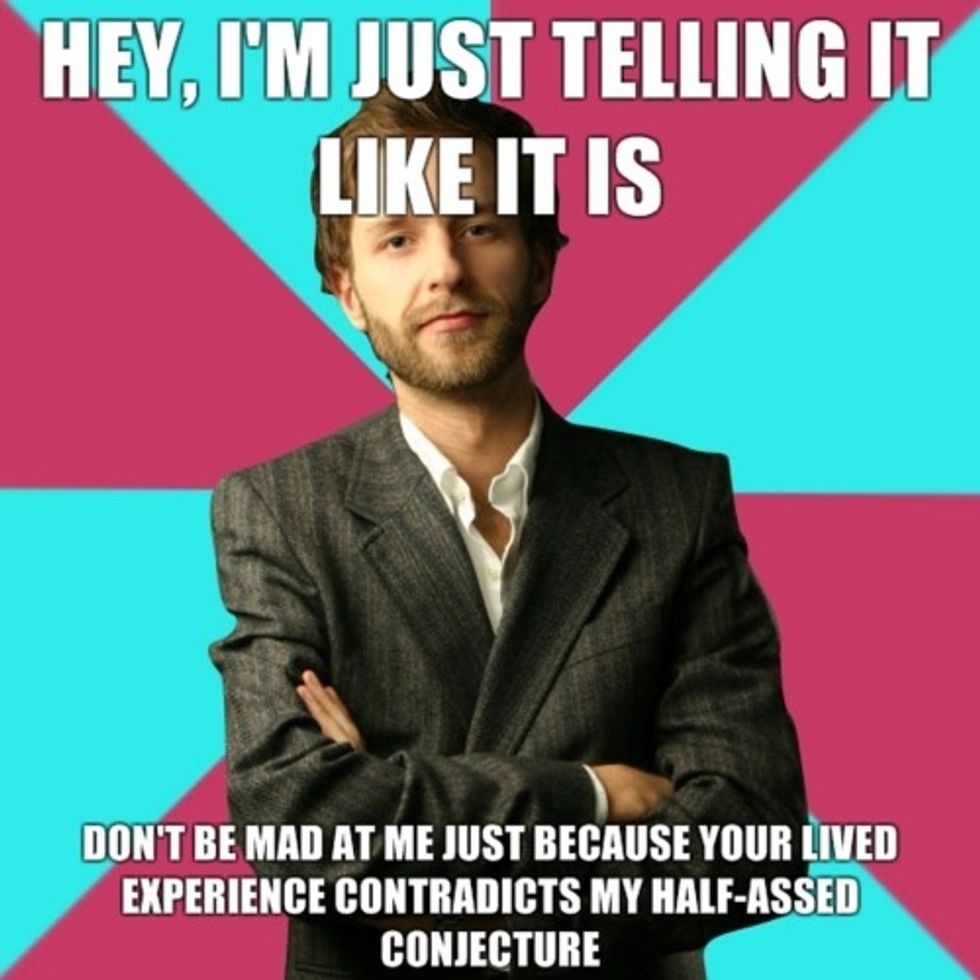 While I was not feeling up to much writing these past couple of days, that didn't stop me from provoking anti-choicers on Twitter to disparage contraception, so that I could then retweet them and help further understanding of where the attack on reproductive rights are coming from. After all, it's a surprisingly easy task that a lobotomized monkey could probably do, but no less entertaining for it. And in doing so, I had a revelation. It came after yet another dude (and so far, out of the dozens of people who explain to me that female sexuality is only for procreation, and not for pleasure, only one has been female) condescendingly explained that contraception "cheapens" sex, presumably by making it something you can have on more than an annual basis, I decided to have some more fun. After all, every time a guy explains that the tools we use to have frequent, spontaneous, carefree sex are naughty, he's basically hanging a sign around his neck that says, "I don't get laid much, if at all, so I don't really know how this works." Listening to anti-choice nuts talk about sex is like listening to Mitt Romney explain hip-hop. They're so painfully out of the loop you can't decide if you want to laugh at them or cringe in embarrassment for them. So I told the guy, hey look, when you say these things, people aren't persuaded of anything but that you don't know what the fuck sex is like.

At what point he told me defensively that he's a virgin. To which I dusted off a hoary old joke and said, "Don't play the game? Don't make the rules." Hey, at least it's funnier than the aspirin-between-the-knees bit, and has the advantage of being true. To which he said I was being "ad hominem", which is a phrase apparently 100% of conservatives think means "you're wrong because you bested a conservative in an argument, and that's against the rules we wrote".

That's when it occurred to me that one of the things that's feeding the outrage about the contraception thing is that it's a big clusterfuck of mansplaining.

One of the reasons Issa's male-only morning panel on contraception access took off like wildfire is the obvious WTF reason, but it emotionally resonated on an even deeper level precisely because this is probably the most mansplainy situation of all time: a bunch of men tellign women what our sex lives should look like.  That's men who have never taken a birth control pill, never worried about getting pregnant, often have very littel idea how the female reproductive system works, and often have only remote understanding of what normal* people's relationship to sex is like, if that. Women really hate men who know less about a subject sneering down their nose at us and telling us to shut up and listen to the man's opinion on this. This has been a national bout of mansplaining in the worst possible way, and that's just got emotional resonance.

All that said, I want to be clear that it's not enough to be outraged at the anti-contraception shit and take it as a given that it's way out of bounds. I mean, it seems obvious that it is, but without an aggressive counterattack from the left, right wingers may gain ground in their attempts to redefine the over 99% of women in the country who have sex for fun and not just for procreation as sluts. We need to frame our arguments as a full-throated, unapologetic belief that sex is good, women are good, and women's right to enjoy sexual pleasure without shaming or government interference is good. Unfortunately, I'm not seeing enough of that. Instead, the most important argument---that a woman has a right to be a sexual creature and that sex is good---being abandoned by all sorts of liberals and feminists. The most common form this concession takes is well-meaning, and often person conceding the argument that women who have sex for pleasure are somehow less-than don't intend to concede it. But that's nonetheless what they're doing. That concession looks like this:

"Some women aren't even taking the birth control pill for contraception! They need it for cramps/endometriosis/etc."

Every time you say this, a right winger wanting to imply that women who have sex for pleasure are sluts gets his wings. This statement and all variations on it feeds into the right wing claim that a) contraception is not health care and b) that women who have sex for pleasure are so indefensible that you have to lean on off-label uses for a contraceptive drug to justify its existence. It also does absolutely nothing to defend the non-pill contraception that's covered by the health care act, such as IUDs or sterilization. Plus, that gives them an easy out, which is to say that they're fine with insurance covering pills that are prescribed for non-contraception use, but just object to prescriptions for women who use them to prevent pregnancy.

I realize talking about and defending female sexual pleasure is a hard thing to do. Our society still has a ton of shame around the topic. But that's what this fight is about. It's not even really about contraception, per se. That's why the Republican candidates, when asked about contraception, actually answered the question as if John King had said, "Where do you fall on the subject of women having sex without your explicit permission first?" (I'm serious; their answers about "out of wedlock" births and the like make way more sense if you substitute the phrase "unauthorized sex" for "contraception".)  We can only win this if we have a clean fight about it. And that means tackling the question of sex directly, and not chewing around the edges or worse, building our defenses around women who could theoretically be celibate but still on the pill.

And you know what I've found? If you defend female sexuality directly, it's not as bad as you think it's going to be. They don't actually have an argument against the contention that women deserve to have support for happy, healthy sex lives, and that sex, being a normal part of human nature, should be incorporated into standard health care just as surely as eating  and work are.** In my experience, they tend to fall on the naturalistic fallacy, claiming that they have secret knowledge that infrequent and stressful sex is more "natural" than carefree, joyful, frequent sex, or they try to find ways to call you a slut without just saying it directly. Neither is an argument. The latter is something I think we can collectively learn to laugh off. Addressing the real subject at hand can often be clarifying and invigorating, and not so scary at all. After all, most people have sex. If they're against female sexuality, they're either ignorant or sadistic (or both), and that becomes clear quickly enough.

*And by normal, I don't mean vanilla, but more that most people on some level overcome their fears and disgust with the human body and learn to enjoy its pleasures with relatively little guilt. In fact, the mainstream of America actually probably is more worried about not getting enough sex than if they're having "too much". Read any advice column. You're not going to see people writing in saying that they're doing it 4 times a week and are worried that's too much. Far more often, you get letters from people who are upset because it's trailed off to once a month or less, and they want to know how to reignite the spark.

**Seriously, imagine applying abstinence-only logic to other kinds of health care issues. Need some help managing stress-related illness? Well, why don't you just abstain from being stressed? Sure, that means quitting your job and then bringing on a whole new bunch of stress-related problems that come with unemployment but NYAH NYAH I CAN'T HEAR YOU ABSTINENCE WORKS 100% OF THE TIME. Want some nutritional advice? Or, if you're diabetic, want some insulin? Why don't you just abstain from eating? That's free, and here's some quacks to tell you that fasting is the key to immortality. The claim antis make is that you don't "need" sex, but that claim insinuates incorrectly that there's a bright white line between "need" and "want" that isn't there. Actually, not being able to pursue a sex life is going to be very risky for the majority of sexual people. Sex supplies fun, companionship, sexual release, closeness, etc., all things that are part of a healthy lifestyle. The risks of not feeling free to pursue sexual pleasure, for sexual people, are despair, loneliness, stress and all related illnesses, and high risk behavior borne from ill-fated attempts to redirect your sexual energies elsewhere. To claim people don't "need" the right to control their own sexuality is similar to claiming they don't need exercise. Well, in the short term, maybe not, but over time, that shit builds up.