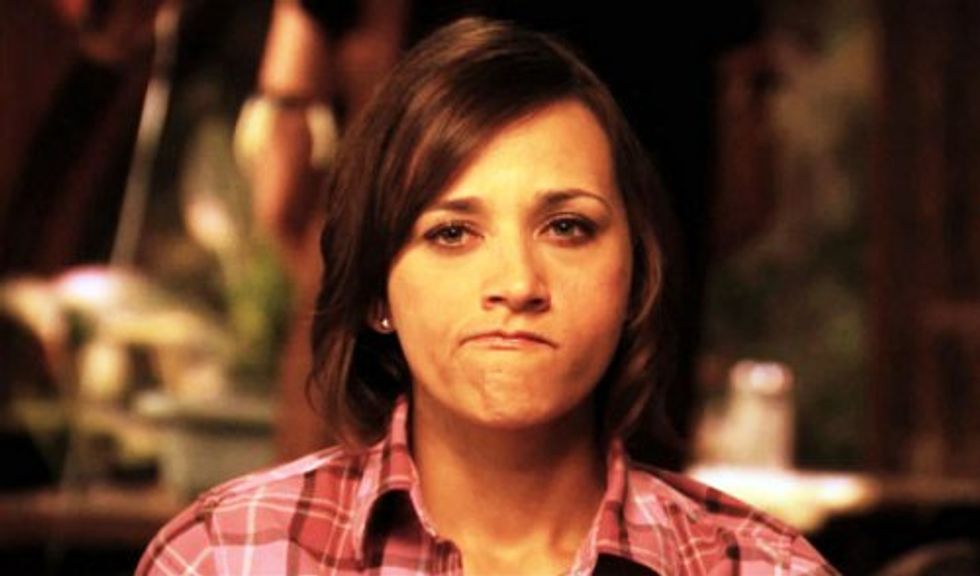 Spoilers, for people who struggle maintaining the maturity levels not to hold the entire internet responsible for your inability to work through what's saved on your DVR.

Last week, I published a piece where I adopted the role of the bearer of bad news: TV's silly-but-loveable feminist Leslie Knope is getting defanged by NBC, probably in a last-ditch attempt to get the ratings up. Since the show is a spin-off of "The Office", which started off as a sharp satire of ordinary American work life but devolved into an unfunny but typical sitcom about the glories of the patriarchal family, I wasn't particularly surprised. Americans love the comfort of unfunny sitcoms that romanticize this stuff. It's our comfort food. Applying sharp comedy to gender role-playing is especially unwelcome; we don't want to come home after a hard day's work and have some snooty TV writers make us all uncomfortable with the sexism we perpetuate and rationalize by wrapping it in a blanket of romance. "Parks and Recreation" has shitty ratings, and as I've pointed out before, they clearly have no desire to blow a raspberry at the almost-inevitable helpful network suggestions that they dumb it down a little like "Community" did, so seeing them move in the direction of "The Office" isn't surprising.

However, my article, which came out the same day that the Valentine's Day episode came out, was controversial, with Maya at Feministing offering a rebuttal. This didn't surprise me, so I wasn't upset. The evidence that the show had taken a turn was far from conclusive, and my hope in writing the piece was to start dialogue, not offer the final word about it. At the time I wrote it, the show's direction was ambiguous enough to really allow for multiple readings, as it were.

But the episode that aired on the same date that my piece was published, titled "Operation Ann", removed all doubt. That episode was a fundamental betrayal of both the characters of Leslie and Ann, and of the show's quiet but persistent feminism they're now selling down the river in a desperate bid for ratings.

Since when is Ann Perkins one of those women who has so little going on in her life that the mere idea of being single sends her into a spiral of self-loathing? As far as I remember, Ann has never once suggested that being single is such an awful thing that one should seriously consider lowering your standards to rectify the situation. As recently as last year, in fact, Ann was having a fun time tearing through every dude in Pawnee, having fun sleeping with them but refusing to settle down. Nor was Leslie ever Ms. Everyone Should Have A Boyfriend. Sure, both characters like having boyfriends, but they've never considered it more important than having a full life with lots of friends or meaningful work. Nor have they ever thought that having a boyfriend is so important that considerations like compatibility or attraction should be shoved aside. Old Leslie, if Ann had been in a funk about being single, would have bucked her up like she did to Chris in this very same episode: reminded her that she has a lot going on and there's no rush. But now the show has a double standard. If Chris is sad about his single status, he needs to just cheer up and remember life goes on. Ann, however, should hurry up and settle down with the first person that she can have a halfway reasonable conversation with. Who turns out to be Tom. You know, the resident douchebag of Pawnee. I love Aziz Ansari, of course, but the whole point of Tom's character is that he's an insufferable douchebag.

Maybe the show will right itself. But right now, I'm skeptical. While I doubt that they're going to capture a bigger audience by abandoning the feminist subversion for more mainstream sexist romantic cliches, I can see that it might seem like the only hope of getting ratings up.

By the way, it's just telling that we live in a world where Zooey Deschanel has her own show, but no one can ever figure out what to do with the beautiful and talented Rashida Jones.