This is what a double standard looks like, in its starkest form 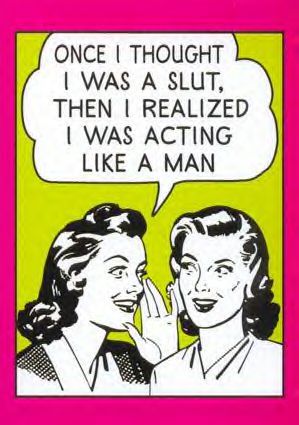 As you know, House Republicans are flipping out and screaming about Obama and the HHS wanting to mandate contraception coverage for those dirty, dirty sluts that use contraception, the ones that constitute over 99% of women. This isn't about "religious freedom", no matter how much that's being used as a distraction. As Mother Jones reports, the USCCB has made it clear that they want a repeal of the entire mandate, because they think women having sex for pleasure is wrong, full stop. Before they were screeching about "religious freedom", the USCCB was clear that they just really want to punish women for fucking. Dana Goldstein reported on this in 2010, and got this delicious quote:

"I don't want to overstate or understate our level of concern," said McQuade, the Catholic bishops' spokesperson. "We consider [birth control] an elective drug. Married women can practice periodic abstinence. Other women can abstain altogether. Not having sex doesn't make you sick."

This is a full-blown war on women's sexuality. Always has been. Republicans are rallying around the idea that women who have sex are sinful and dirty and that therefore their basic health care needs aren't "real" health care. That's what's behind this battle, and was behind the attempts to defund Planned Parenthood, and the pushing of abstinence-only education before that.

I'm reminding you of all this, because this is what happened at CPAC today:

“‘I was thinking about how sexy it would be to kiss you,’” world renowned pickup artist Wayne Elise told a group of young Rick Santorum fans. “You can say that [to a girl], it’s a cool.”

Elise, better known by his handle “Juggler” from Neil Strauss’ notorious pickup memoir The Game, was offering advice to attendees at conservative mega-conference CPAC on how to improve their dating game. Remember that old VH1 reality show The Pickup Artist with that lanky host with a Slash hat and goggles teaching people how to insult girls then hit on them when their self esteem is shattered? This is one of his top rivals, charging upwards of $5,000 for a one-day private session.....

But on Thursday, young socially conservative activists got it for free. One tip, he noted, was to introduce sensuality into early conversations with girls — like the above quote — to keep from falling into the platonic zone with your target.

“Most guys fall into the category of not being sexual enough, so that girls will easily see them as friend material and the guys have a hard time getting out of that,” he said. “I think one of my ideas that connects to conservatives is that it’s OK to wait but you definitely want to show the person you’re sexual and sensual.”

Emphasis mine. This goes on for awhile, but the short version of it is that while simultaneously screeching about the evils of feminism and how terrible it is that women want to have their contraception covered like common slatterns, conservative activists are also encouraging young men to be more sexual, more sexually aggressive, and to even seek casual sex with women. Women who then can be condemned by the Catholic bishops, House Republicans, anti-choice activists, and whoever else wants a potshot for offending their delicate sensibilities with their desire not to get pregnant. The double standard always lurks in these discussions about sex, but man, it's just getting blatant. Being a perverted liberal, I've been to lots of conferences where groups like Planned Parenthood and the like handed out condoms, precisely because they know people hook up at these things. But I'm guessing they're not welcome at CPAC. Because while men apparently need to be more sexual, women being sexual at all is a national tragedy that moaning and wailing about it  has to dominate the cable news and the halls of Congress.

Update: I also want to point out that "pick-up artistry" is sexist, in that it promotes a "men are hunters/women are prey" approach to sex, as opposed to the enthusiastic consent model of femihism. But it's also just bullshit. If anything, some of their pointers, such as being rude and insulting to women, probably make it less likely you'll get laid. You're better off honing your overall social skills, because women are people, and being people, they act like people.