Why are Republicans acting like the election was sprung on them by surprise? 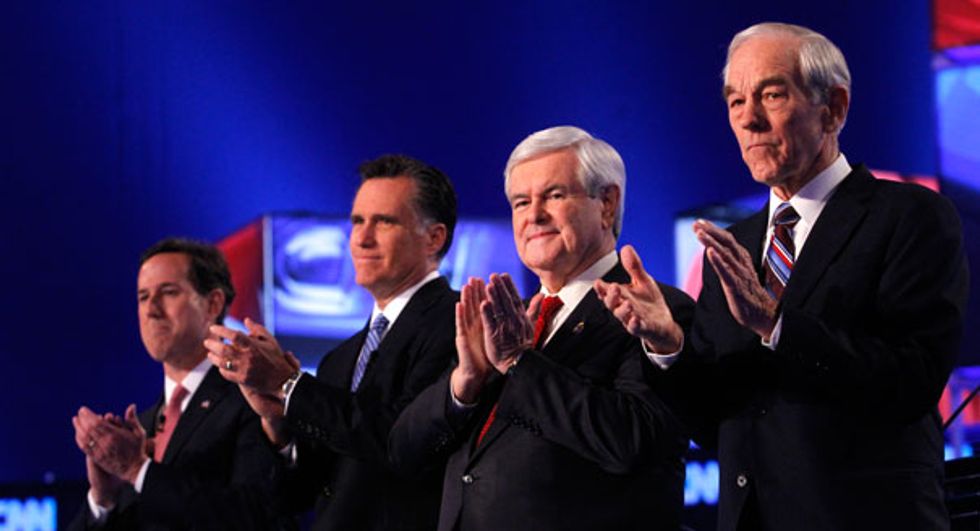 There's something intensely hilarious about Republicans acting like the election season was announced on them out of nowhere, giving them no time to prepare a suitable candidate. Steve Kornacki has an article about why the "white knight" fantasies Republicans are indulging, where some great candidate that can unify the nuts and the moderates will emerge and save them all from the black President, is just foolish. I recommend reading it; it has some good arguments with which to taunt your conservative friends indulging these fantasies. But really, the fantasy itself is fascinating enough:

This is why there’s suddenly loud talk about a new candidate jumping in the GOP race. If Romney melts down, Santorum looms as the next most likely victor — and his white hot culture war rhetoric these past few days is a perfect demonstration of why most November-minded Republicans believe his nomination would be a disaster. And after Santorum comes Newt Gingrich, whom those same Republicans tend to regard as poison, and then Ron Paul, who’s a nonstarter. As an unnamed Republican senator told ABC News late last week, “If Romney cannot win Michigan, we need a new candidate.”

Due to rioting in the streets and the eventual election of Richard Nixon, our country soured quickly on brokered conventions, but hey, Americans have short memories, so I can see the fantasy  has emerged. But it just makes Republicans look stupid. They kicked off the primary season like 8 months early! Now they're running around saying, "Oh shit, we forgot to develop an acceptable candidate." For the 2008 election, both Clinton and Obama had their campaigns up and running before 2007, and the Republicans are suggesting that it's just fine to grab someone off a shelf in August and toss them into the race. In other words, the very thing that got them into this mess---believing anyone would do and not really putting any effort forward to develop a good candidate---is what they foolishly think will save them. Why on earth do Republicans persist in this delusion?

Well, I think the answer lies in the Republican fondness for teleprompter jokes about Obama. No, hear me out.

I'm sure it hasn't passed anyone here's attention that the now-mandatory jokes about Obama being unable to speak without a teleprompter* are racist dog whistles. These jokes substitute for swipes about "affirmative action" (not that conservatives don't make those as well, but those are more undeniably racist and so tend to exist more on the fringes), and "affirmative action", in turn, substitutes for more straightforward claims about race and merit, claims that have become socially toxic, unless you're Andrew Sullivan whining about the P.C. police shutting you down by making faces at you. But conservatives have a weird relationship with this spoken-in-code belief that the President is stupid and only has his position because the nation had a spasm of affirmative action impulse voting. On one hand, they do believe this. On the other, they only "believe" it, because they're not blind and can see just as well as the rest of us that he is a smart man. The result is that they initially believed any white dude in a suit could beat Obama, and that racism gave them an excellent tailwind in this race. And then, in a class too little too late fashion, they realized that they should have actually considered that Obama is a formidable candidate and beating him is going to be really hard to do. But, being conservatives, their solution appears to be, "Okay, get rid of all these other white dudes in suits, and grab someone else and throw him in! Surely he'll be better." It's weird. I've never seen anything quite like it. It's like someone who keeps buying the latest issue of US Weekly and then is surprised every time that it's not Harper's. I can't help but think if race wasn't such a distraction for conservatives, they could have put something better together.

*Which is an inverse of reality. All politicians use one, because it looks better than the previous era, when all politicians---yes, Lincoln, yes, Roosevelt---read speeches off pieces of paper. (In fact, this practice saved Teddy Roosevelt's life; he had the manuscript of his speech in his pocket when a would-be assailant shot him, and the manuscript slowed the bullet down and kept it from killing him.) But off-teleprompter, Obama performs way better than average. In fact, his ability to give clear but eloquent answers off the cuff is one thing that separated him at a young age from other politicians.