President Barack Obama's approval rating has plunged below 50 percent and he would be beaten by Republican frontrunner Mitt Romney if November's US election were held today, a poll showed Monday.

The survey, by ABC News and The Washington Post, indicated that only 46 percent of Americans now approved of the way Obama is handling his job and 50 percent disapproved as he took a hit from rising gas prices.

The situation was a reversal from early February when 50 percent approved of the president's performance and 46 percent disapproved.

The survey was released as the battleground for the Republican presidential nomination moved to the deep South for Tuesday's primaries in Alabama and Mississippi.

If the presidential election were held today, the poll found that Romney would beat Obama 49 percent to 47 percent.

The president was barely ahead of former Pennsylvania senator Rick Santorum, who is running second in the Republican pack -- 49 percent to 46 percent.

According to the survey, the drop was attributed to soaring gas prices threatening to crimp America's slow recovery from a recession.

The American Automobile Association (AAA) predicts gasoline prices across the United States could average $4.25 a gallon by May, up from over $3.60 today.

Prices vary wildly between regions, however, and last week, gasbuddy.com, a website that tracks prices in all 50 states, reported $5.09 a gallon at one Mobil and two Chevron stations in greater Los Angeles.

Given that 76 percent of Americans drive themselves to work, and a trip to the store can often mean a long drive to the mall, higher gas prices are a critical issue -- especially in a presidential election year.

The polls also found 59 percent of Americans had given Obama negative ratings on the economy, and 65 percent disapproved of his handling of the gas price situation.

The telephone poll was conducted March 7-10 and had a margin of sampling error of plus or minus four percentage points.

Santorum's win in Kansas on Saturday -- taking 33 of the 40 delegates -- was offset by Romney victories in Wyoming and in the US territories of Guam, the Northern Mariana Islands and the US Virgin Islands.

Romney has now won 17 of 26 state or territory votes, compared to seven wins for Santorum -- eight if you include a straw poll in Missouri -- two for former House speaker Newt Gingrich, and none for Texas congressman Ron Paul.

With 455 delegates, Romney has almost 40 percent of the 1,144 needed to secure the nomination. Santorum trails with 199 delegates and Gingrich has 117, according to authoritative aggregator RealClearPolitics.

This lead means Romney's competitors must win some 70-75 percent of the remaining delegates -- which are handed out proportionally by district in many states -- in order to snatch the nomination.

"Uniting the opposition to Romney in a single candidate is the only chance, or the best chance, of seeing this process continue for a while," said Charles Franklin, a professor at Marquette University Law School.

"With Gingrich, there is also the question of when does dogged determination become a pointless crusade. Surely that point is coming pretty soon," Franklin, co-founder of pollster.com, told AFP.

Whatever happens on Tuesday, Gingrich has vowed to stay in the race all the way to the Republican Party convention, which will crown the eventual nominee at the end of August.

"With Gingrich exiting the race, it would be a true head-to-head race and conservatives would be able to make a choice between a consistent conservative in Rick Santorum or Mitt Romney," a statement said.

Despite a bulging war-chest and a vast campaign team, Romney failed to seal the deal on Super Tuesday as doubts linger among key Republican voting groups about a candidate who would become the first Mormon presidential nominee.

Romney, who celebrates his 65th birthday on Monday, has portrayed himself as the underdog in Alabama and Mississippi, Bible Belt states where a majority of primary voters describe themselves as born-again or evangelical Christians.

Despite well-documented marital infidelities, Gingrich has done well in the south, winning convincingly in South Carolina and Georgia -- albeit his home state -- and recent polls shows him edging ahead in Tuesday's contests.

In Alabama, a Rasmussen survey Friday showed Gingrich leading with 30 percent, ahead of Santorum with 29 percent and Romney with 28 percent.

A poll in Mississippi by American Research Group showed Gingrich in the lead at 35 percent, ahead of Romney at 31 percent and Santorum at 20 percent.

Kevin Strong was placed under investigation a week before the Capitol riots after a witness told the FBI that Strong believed he had "Q clearance" and that World War III was going to occur on Jan. 6. The witness also said that Strong hung a "WW1WGA" flag -- which represents the popular QAnon slogan "where we go one, we go all" -- at his home, and believed QAnon would cover the cost of a truck he recently purchased.

Adam Ciralsky of Vanity Fair was embedded with Pentagon leadership during the final week of the Trump presidency -- and "came away both relieved and deeply concerned by what I witnessed" he reported Friday. 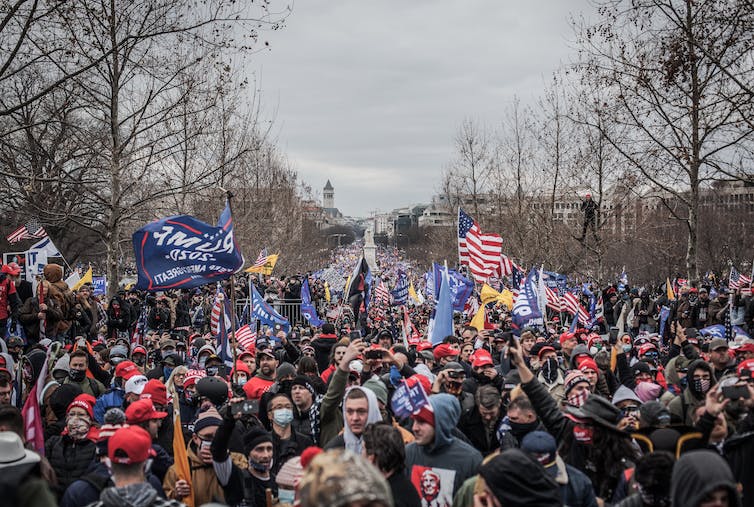 There were women among the crowd that marched to the Capitol and stormed the building.