How Republicans completely misjudged this 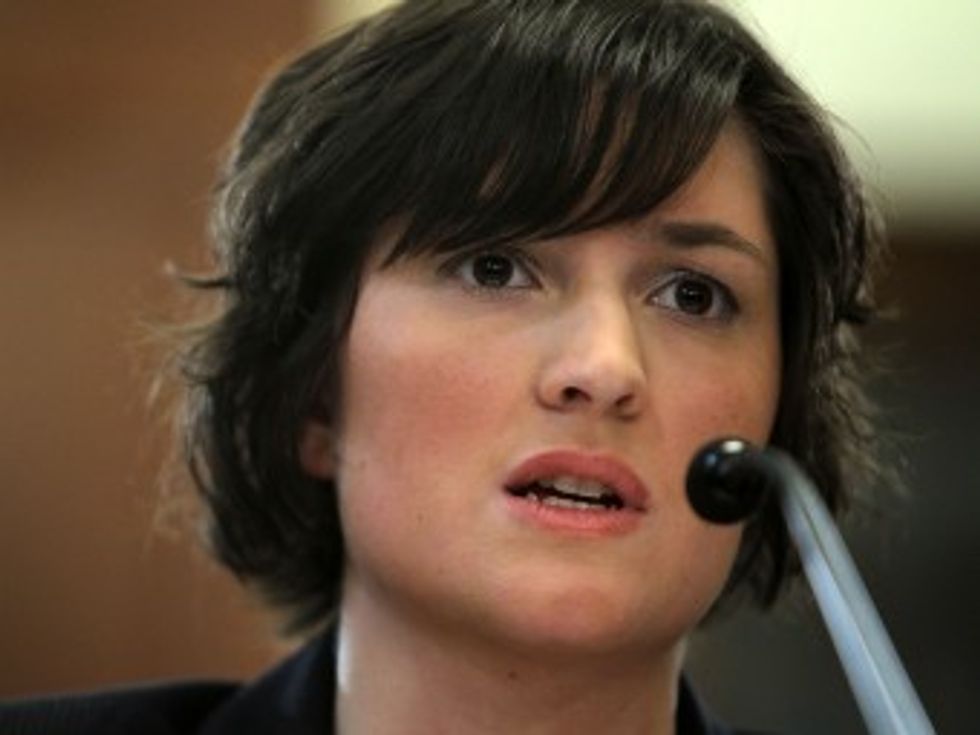 After the Blunt amendment went down, I figured that, policy-wise, Republicans were out of options in their desperate bid to separate middle and working class women from simple access to contraception. It was their single best shot, after all, and it frankly wasn't a very good one. Unfortunately, the war on low income women who don't have access to health care benefits through work continues at a rapid pace; with the pretense about "abortion" or "religious freedom" falling away during the Slutstraganza, Texas is cheerfully cutting 130,000 women off their access to contraception and cancer screening cuz SLUTS.

Republicans should have let the story die over the weekend, but in part because of the right wing media, that wasn't going to happen. So even though the right is actually out of realistic options, the debate over whether or not 99% of American women are worthless sluts has continued on, and every day it continues is a bad day for Republicans. So it looks like Senate Republicans are taking action to speed up the demise of this debate:

From one top GOP senator openly lamenting the fallout of the ongoing fight over contraception, to the author of the controversial legislation at the heart of that fight effectively conceding defeat in the upper chamber, signs mounted Tuesday that suggest Senate Republicans want to put the birth control controversy to bed.

“You know, I think we’ve got as many votes as I think there were to get on that,” Senate GOP Conference Vice Chairman Roy Blunt told TPM Tuesday afternoon after a weekly Capitol briefing. “I think the House side may take some further action. That debate will go on for a long time, though I don’t know that there’s anything else to happen in the Senate in the near future.”

The concession marks a departure for the GOP leadership, which as recently as last week insisted that Republicans were on the right side of the issue and would fight on.

Last Thursday, after his amendment was narrowly tabled 51-48, Blunt vowed that, “The fight is not over.” He had maintained that he wants to tack it onto legislation the president cannot veto. But on Tuesday, after a meeting with his caucus, he dialed down expectations for any further action in the Senate.

The question is can they really get Rush Limbaugh, Sean Hannity, and Bill O'Reilly to stop  hyperventilating about their brand-new discovery that there's this thing called the "birth control pill", and it's been considered a standard part of women's health care for about 50 years now? I'm not sure.

So why did Republicans think this was going to work in the first place? I think it's because they think that some feminist gains are more controversial among the general public than they actually are. The Beltway media aids in this; they look at all the Bible-thumping nonsense pouring out of red states and overestimate the actual on-the-ground enthusiasm for the no-fucking rules. Never underestimate the capacity of people to compartmentalize, and believe fucking is wrong on Sunday morning, but by Monday night, believing it's oh so right yet again.

Beyond that, I think the whole situation is a result of many on the right and in the Beltway media not understanding that social justice is a piecemeal thing. It's not like feminists just flip on a light and suddenly the contention "women are people" is understood and accepted by all across the board. Some rights, such as the vote, are universally accepted now. Some, such as who does what amount of housework and whether or how much right women have to reject male attention, are still hotly contested. And some have widespread acceptance, but Republicans just haven't gotten the memo yet. I think that this is where they screwed up. They believe two things are still controversial that aren't, and they just found out the hard way how wrong they are:

It's clear that the Republican party still finds equal pay for equal work to be offensive---which is why the Supreme Court ruled against Lilly Ledbetter---but what they fail to understand is that while some excuses are still being made for the wage gap out there, the public at large really does reject paying women less just because they're women. They may not understand why it's a problem that women get less pay because of child care issues and things like that, but open discrimination  where women do exactly the same work as men but get paid less for no other reason than gender has reached the point where it's nearly as offensive as denying women the vote. Republicans still labor under this delusion that men want women who have no aspirations but to be housewives, and while that does exist, I don't think it's as common as they think. A lot of men see dependent women as a burden, and want to form dual-income marriages because duh, that means more money and a more comfortable living. Unfortunately, it's much easier for men to prefer to marry working women because they know women will still do most of the housework, but nonetheless, I think both men and women see that their lives are better if women work. And since they've accepted that, they're not going to be keen on bringing in less money for no other reason than discrimination.

The contraception mandate is, at its core, about equal pay for equal work. Under the Affordable Health Care Act, all of men's preventive care is covered, so it's only fair to cover all of women's. That Republicans demand that employers have a right to give women fewer benefits simply because they're women is no different than Republicans demanding the right to pay women less simply because they're women. This crosses a big line with most of the public.

As for the second one, this is where the Republicans really misfired. They really overestimated public antipathy towards privileged adult women having sex while single. I can see why they made this mistake; they watch a lot of Fox News, and Fox is always on about "girls gone wild". What they forgot is that Americans don't see single women as an undifferientiated mass. When it comes to middle class or upper class women who eventually want to marry and have children, there's widespread acceptance of premarital sex. There's also complex racial politics in play here, where women of color still face more shame for being sexual than white women, even when all other things are equal, but I think that's one of those things that's fading away, especially with women like Michelle Obama living up to the modern ideal of sexy-but-wholesome. Right wing media thought that they could label someone like Sandra Fluke a "slut" or a "semen demon" for no other reason than she's 30 and unmarried, and this is where they misfired. Americans are still uptight about poor women having sex, teenage girls having sex, queer women having sex, and women who openly reject the path to marriage and motherhood having sex, but they're just fine with the Sandra Flukes of the world having sex. Cohabitation before marriage is the national norm, and not just for my generation. I'm from Texas, for god's sake, and I can probably count the married couples I know under 60 who didn't live together before marriage on one hand, and in all my life, I've never known anyone to have a fight with their family about that.

I can see how this fact gets lost in the shuffle, because the anti-choice movement is so loud and has so much power over Republicans. But if you think about it, most of their victories only come when they focus on pushing their extremist anti-sex agenda on the disempowered: the young, the poor, lesbians, women of color, and women who are perceived as being a little too hostile to marriage and motherhood. Even their extremist abortion restrictions have to play on hostility for these less-beloved groups of women: restricting financing, parental notification, and regulations that basically play on the belief that some women just need a little push towards marriage-and-motherhood tend to go over more easily than restrictions that are seen as legitimate obstacles for "good girls".

Democrats played this well. They could have been more cowardly and found a married woman with health problems to testify, but instead they gambled on a woman who isn't married. In doing so, they really exposed this gap of understanding between Republican politicians and pundits and the rest of the country on how acceptable it is for relatively privileged women to be single and sexually active. In fact, this really succeeded beyond their wildest dreams. I doubt that even in Nancy Pelosi's best case scenario feature the self-destruction of Rush Limbaugh, with bits of slime sticking to Mitt Romney.

None of this means our work is even close to done. Americans are wildly sexist still. There's a ton of women you can unironically call a "slut" without getting tons of backlash, i.e. see above categories. But this was a case where Republicans completely misjudged how ordinary Americans of all political stripes feel. Perhaps there are some political lessons in this that can be paid forward.