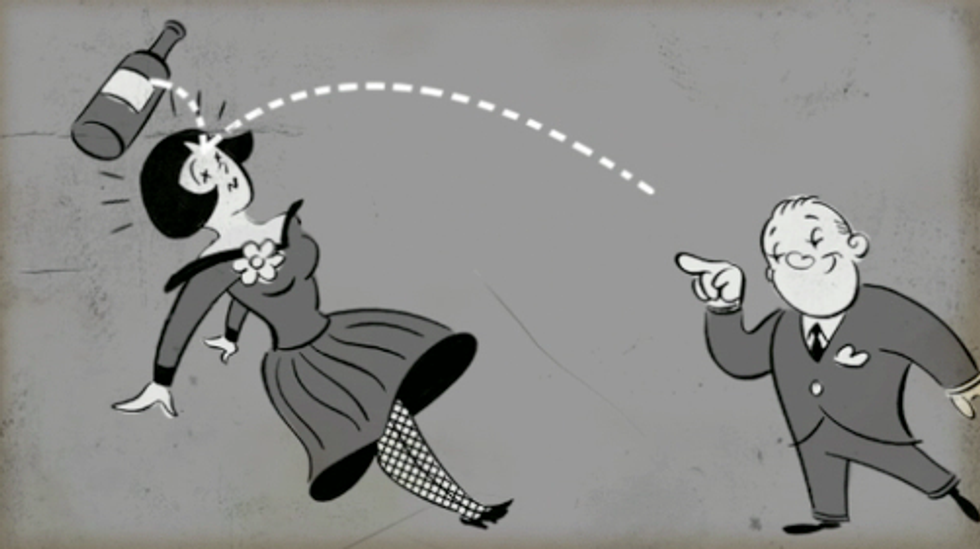 So, Sandra Fluke---Georgetown law student---testified in front of Congress about using birth control and the expense. The response from the right is to act like she's the first woman on Earth to have confessed to having sex for reasons other than baby-making, and thus to call her the town dump. I wish I could say I'm exaggerating, but I'm not. Rush Limbaugh, who has been married four times and is a well-known fan of taking big bottles of Viagra to the Dominican Republic, said this about Fluke:

On top of the baffling assertion that there's a direct correlation between the amount of sex you're having and the price of the birth control pill (believe me, they charge you the same whether you're getting laid or not), you of course have the notion that any woman who has sex is a "slut" and a "prostitute". And I mean any. Limbaugh tries to give himself cover by saying the "taxpayer" would be on the hook, but in fact, this is about whether or not insurance plans women pay into should cover their fucking health care. More importantly, the idea that contraception is health care and not just some per-fuck admittance fee for sex has long been established. Conservatives are pretending that Obama is requiring insurance companies to cover something they've never covered before, but in fact, they already cover it. The only thing that this is about is whether or not that coverage should be universal and treated like preventive care, which means offered without a co-pay. For instance, my insurance covers about 40% of the cost now and will, starting in 2013, cover 100%. Since 99% of American women have used contraception and since insurance companies already accept that contraception is a service that should be covered, Limbaugh basically characterized the 99% of American women as "sluts" and "prostitutes". I don't imagine you get a pass if you've only used condoms, either, because roughly 0% of women who use only condoms do so out of some noble unwillingness to accept insurance coverage for their contraception. Additionally, women who only use condoms still get other kinds of health care related to being sexual, such as Pap smears and gynecological consultations on their contraception choices, which, by Limbaugh's logic, puts them firmly in the "slut" and "prostitute" category, since insurance covers that sexuality-related care as well. So I suppose that puts the percentage of American women who are "sluts" at the level All in his world, except maybe a handful of lifelong celibates. And he probably has a few choice, judgmental words for those women, as well.

Which shouldn't be a surprise. Conservatives try to pretend like these blatant anti-woman attitudes are about something other than just seething hatred of women for being female, but this entire contraception debacle has demonstrated that nope, it's just misogyny. For instance, check out the Craig Bannister piece I blogged about at XX Factor today. After going on at length about how women on the pill must all be filthy sluts who spend all day sucking and fucking, Bannister ends his piece with the unapologetic double standard:

If these co-eds really are this guy crazy, I should've gone to law school.

Yep! He trotted out the "if a woman has sex with one man, she will have sex with anyone who asks" line. (Which is, may I remind you, often used to rationalize rape---the "will have sex" turns into "has to have sex, whether she likes it or not" very easily.) I thought I was beyond being surprised by the levels of ignorance, misogyny and prudery that emanate from the right, but nope! Here is a grown ass man who actually still believes that single women can be divided into virgins and "whores"*, and of course still believes that having sex is roughly the worst possible thing a woman can do, a man having sex is just being a man.

To be clear, women are perfectly capable of dishing out the misogyny as well. Female misogynists are a special breed, morons who think they can escape being classified as women---and therefore as filthy whores who don't deserve any respect---if they hate on other women just as much as the male misogynists do. This is a uniquely stupid thing to believe, because not only do they not get a pass (remember, Limbaugh basically classified all women as "sluts" and "prostitutes"), but their male counterparts who are using them are probably laughing at them behind their backs for being such tools. With that in mind, I give you Tina Korbe of Hot Air:

At one point, Fluke mentions a friend who felt “embarrassed and powerless” when she learned her insurance didn’t cover contraception. Can you imagine how proud and empowered that same friend would be if she learned she has the ability to resist her own sexual urges? We can only assume she doesn’t know that because Fluke and she both labor under the illusion that contraception is a medical necessity.

Conservatives are their own worst enemy when trying to persuade the rest of us that women (and let's be clear, as the David Albo example proves, they are only referring to women---Albo felt so entitled to sex, he demanded an apology for not getting any) are "empowered" by not having sex for no good reason. After all, if pointless self-deprivation was so empowering, then folks like Korbe wouldn't be trying to push their lifestyle choices on the rest of us in a desperate bid to feel better about themselves by dragging everyone else down. Korbe just comes across as someone who is afraid of sexually satisfied people, because as long as we're walking around and being happy, we're making her look like a fool for depriving herself for no good reason. After all, she describes women who use contraception as "animals", even though in reality, using contraception is one of those things that sets us apart from other animals. In fact, I'd point out that most animals fuck according to the ideal Rick Santorum model: joylessly, infrequently, and only for procreation. Most even wait until the female is ovulating, to minimize the time they spend rutting! If your objective is to not be like other animals, the best strategy is to fuck all the time and take advantage of our unique ability to enjoy sex for its own sake.

Beyond all the hatefulness, prudery, and misogyny is just the plain weirdness of all of this. Reading the right wing reaction to Sandra Fluke, you get the strong impression that they think that a single woman in her mid-20s who is sexually active is some kind of freakish outlier, as if Fluke admitted to being a mercenary with side business in running drugs to pay off law school. In reality, Fluke is as normal and American as apple pie. Being sexually active before marriage is just what people do; 93% of Americans have premarital sex before turning 30. We can safely guess there's no love here for women whose main pregnancy prevention strategy is to only have sex with women. Additionally, since no distinctions between women who use contraception in or out of marriage are being made here, women who use it to have monogamous sex with their husbands are being rolled into the "town dump" category as well, which means that basically, the utterly normal and nearly universal experience of being female is being characterized on the right as something disgusting and beyond the pale. Which is just a long, roundabout way to say they straight up hate women.