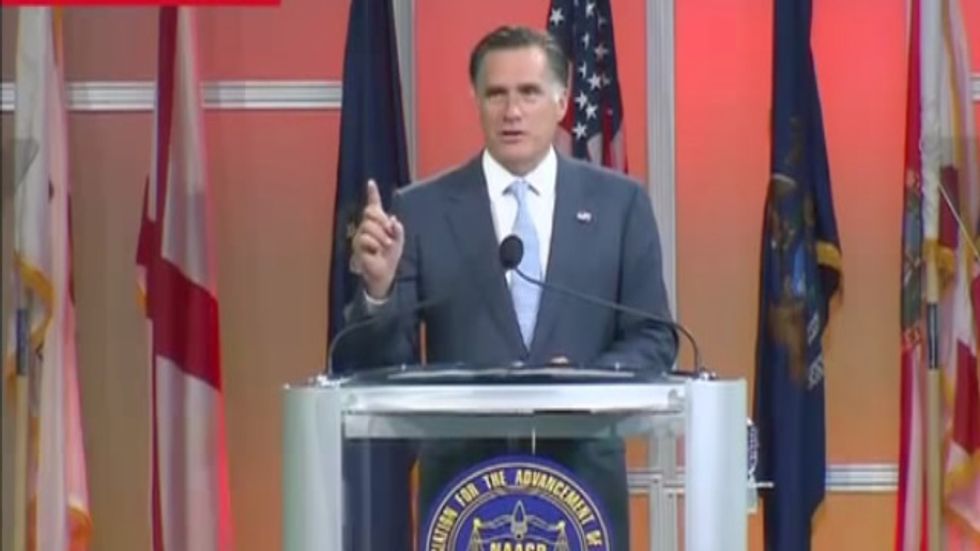 Since Mitt Romney certainly isn't going to pick up many---if any---black voters by making a speech for the NAACP, his choice to go there and make a big media stink about it had to be about something else. There's a couple of interpretations of his behavior. Jamelle Bouie offered the best I've seen:

The point of this address to the NAACP was to send a signal to right-leaning, suburban white voters—that Mitt Romney is tolerant, and won’t represent the bigots in his party. But there’s a sense in which Romney had it both ways: Not only did he reassure hesitant whites, but by pledging to repeal Obamacare—and being booed by the audience—he likely increased his standing with those who do resent African Americans. By going to an audience of black professionals and sticking with his stump speech, there’s a sense in which Romney might receive credit for refusing to “pander.”

My sense of this was that it was actually far more about shoring up the racist narrative than signaling tolerance to right-leaning, suburban white voters, mainly because I've never noticed these voters giving a moment's pause to the idea of switching candidates merely because they fear being associated with outspoken racists.

My suspicion was that it's more about the latter benefit Jamelle spells out: shoring up support with a racist base. That the narrative Romney is trying to establish is, "Gosh, I tried to reach out to Those People and talk some sense into them, but they're just too lazy and greedy to listen." It feeds into larger narratives about how Obama is just trying to steal money from the white man and give it to black people, which in turn satisfies the constant conservative hunger to be assured that they can't be racists, because they're the real victims here.

Any doubt that this is what was going on was neatly wiped away last night with this report:

What makes it especially grating that Romney is playing the black-people-just-want-to-take-your-stuff-instead-of-earn-their-own-living card is that all this is in response to the Affordable Care Act, which mostly expands insurance coverage by getting people onto private plans. Oh, and if they don't do that? They have to pay a tax penalty. Remember that? The thing Republicans were so mad about last week? Unless Romney wants to claim there's a race-based exception to the law, the "free stuff" whine doesn't make a lot of sense. Plus, calling health care "free stuff" is just plain offensive. It equates getting cancer treatment and vaccinations with getting a shiny new TV set. Only moral monsters make that kind of equation, or people who've been turned into them by listening to too much Rush Limbaugh.

Clearly, signaling "tolerance" isn't part of the Romney campaign. Which makes sense. There doesn't seem to be a lot of appetite beyond liberal circles in addressing the problem of racism by actually striving for more diversity and equality. Outside of liberal circles, the main way racism is dealt with is by angry denials that one is a racist whenever it's even slightly suggested that perhaps your political beliefs might be less than ideal when it comes to the goal of eradicating racial disparities between white people and everyone else. Since Romney's not going to get the liberals, he's focusing on everyone else, the "nuh-uh!" population, which encompasses both conservatives and swing voters. Thus, this repulsive race-baiting strategy.

I definitely see why the NAACP graciously offers the chance for Republican candidates to make a pitch before their members, but I'm beginning to wonder if the larger concerns in play are going to make them question whether or not to do this in the future.