Frank Gaffney, president of the right-wing Center for Security Policy think tank, said at the Family Research Council Action Fund's Values Voter Summit in Washington, D.C. on Saturday that Islam is a "brutally repressive doctrine" that is "bad for just about all human beings."

"Not to say that all Muslims subscribe to this, but everyone of them that does is a problem, make no mistake about it," Gaffney continued. He said that we know from looking at groups like Hamas that some Muslims are "perfectly capable of being violent," "but for the moment, here in the United States, they're involved in what I would call, what we describe in the book, a pre-violence state of jihad."

Gaffney's talk also included a projected presentation that outlined Muslims that had reached the high levels of American government that he felt were dangerous, including Huma Abedin, a senior aide to Secretary of State Hillary Clinton and wife of former New York Rep. Anthony Weiner (D). He noted that Bachmann was "vilified" and "attacked" for questioning Abedin's alleged affiliations Muslim Brotherhood, particularly that she was deeply tied to Abdullah Omar Naseef, a man he said is a "terrorist financier." (Image from the presentation below.)

Gaffney's allegations, as posed in a letter Bachmann sent earlier this year to inspectors general in State, Homeland Security, Defense and Justice departments calling for an investigation of Abedin, were met with critism even among Republicans. Former Republican presidential candidate Sen. John McCain condemned Bachmann's investigation into Abedin's ties on the Senate floor in July. "These attacks on Huma have no logic, no basis and no merit. And they need to stop now," he said.

Gaffney himself has drawn criticism for an op-ed in which he wrote that President Barack Obama, "there is mounting evidence that the president not only identifies with Muslims, but actually may still be one himself."

Christian Broadcasting Network’s Erick Stakelbeck, author of The Terrorist Next Door, condemned the Obama administration's response to events in the Middle East this week during the panel. Earlier this week, four Americans were killed in an attack on a U.S. embassy in Libya, including U.S. ambassador Chris Stephens. Stakelbeck repeated the false claim pushed by the Romney campaign that the administration has "apologized" after the attacks. The Romney response, which was issued before a full timeline of events had been put together, was widely criticized. Chuck Todd called it "irresponsible," Mark Halperin called it "craven" and a heckler at a Romney accused the campaign of "politicizing" an ambassador's death.

"Don't worry, it's all because of a 10-minute YouTube film. It's our fault, we're sorry. We won't do it again," Stakelbeck said. He also warned against new Muslim Brotherhood in Egypt. "The Muslim Brotherhood is much more dangerous than Al Qaeda," he said, in part because they wear Western-style suits and "they're much more stealthy about" their desire to implement Sharia law.

The audience also gave a standing ovation to Nonie Darwish, who spoke first on the panel about her process of converting from Islam to Christianity and claims Islam is a "dangerous ideology." She said, "When it comes to Islam, Americans are confused. The whole world is confused, even Muslims are confused about their own religion."

She alleged that Islam "obliged" lying while in pursuit of jihad. "Is there any religion on earth other than Islam that permits slander?" she asked.

"As long as the Arab world and the Muslim world hold on to Sharia, we will never have freedom and democracy. And it is very important that we understand that wherever Islam goes, they will want Sharia, and if we don't give it to them, they will rise up on the streets of America and the streets of Europe will be like the streets of the Middle East," she said.

A photo from Gaffney's accompanying presentation on radical Islam. 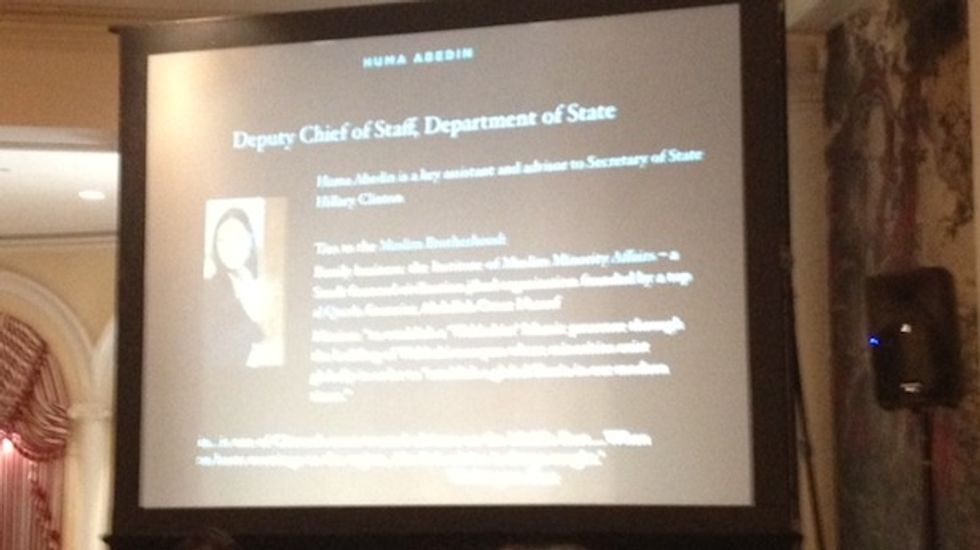