A report published by the Combating Terrorism Center at West Point Military Academy on Jan. 15 discusses the potential dangers of "violent far-right" organizations, which has angered some conservatives that believe the military should focus on international threats.

The executive summary of the paper, "Challengers from the Sidelines: Understanding America’s Violent Far-Right," claims that "since 2007, there has been a dramatic rise in the number of attacks and violent plots originating from individuals and groups who self- identify with the far-right of American politics."

Written by Arie Perliger, Director of Terrorism Studies at the Combating Terrorism Center and an Assistant Professor at the Department of Social Sciences at West Point, the paper asserts that three distinct ideologies exist in the "American violent far right." Those are "a racist/white supremacy movement, an anti-federalist movement and a fundamentalist movement," the last of which "includes mainly Christian Identity groups such as the Aryan Nations."

"Findings indicate that...it is not only feelings of deprivation that motivate those involved in far right violence, but also the sense of empowerment that emerges when the political system is perceived to be increasingly permissive to far right ideas," it later reads. 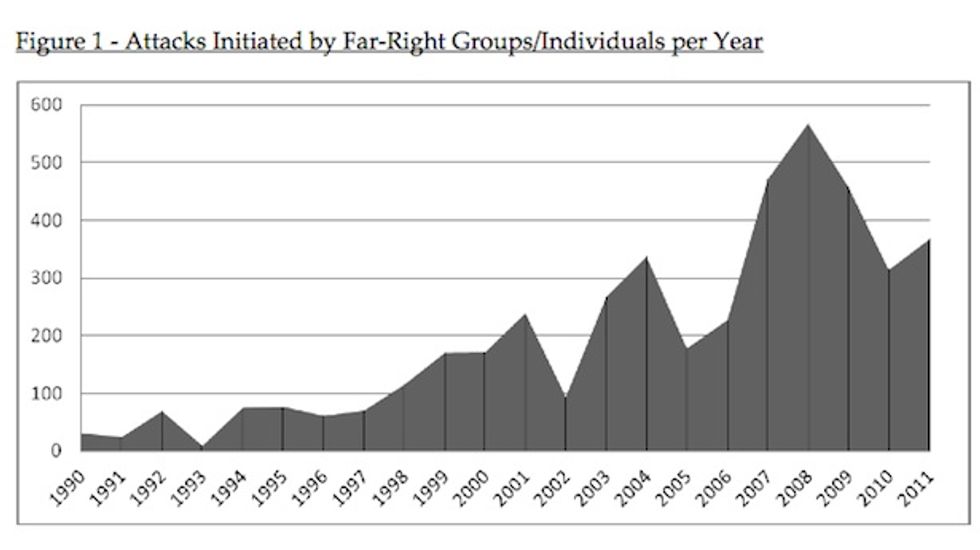 The study also found that "presidential election years and the preceding year are characterized by an increase of far-right violence," leading the author to conclude that "in general, far-right groups and individuals are more inclined to engage in violence in a contentious political climate."

Furthermore, it found that the number of Republicans in the House was positively correlated with an increase in far-right violence, although the causes were not immediately clear. The study posits that it could mean those groups believed those legislators might be "more tolerant of their activities" or possibly that "the high expectations of far-right activists during a conservative legislature" were not "fulfilled."

Some conservatives object to the report. The Washington Times, The National Review, and World Net Daily all report on critical reactions from the right, according to the Atlantic Wire, with blogger Pamela Geller calling it an "appalling attempt to demonize loyal Americans and whitewash the Islamic threat."

[Image: Abortion Protesters At The Funeral Of Dr. George Tiller on Shutterstock]