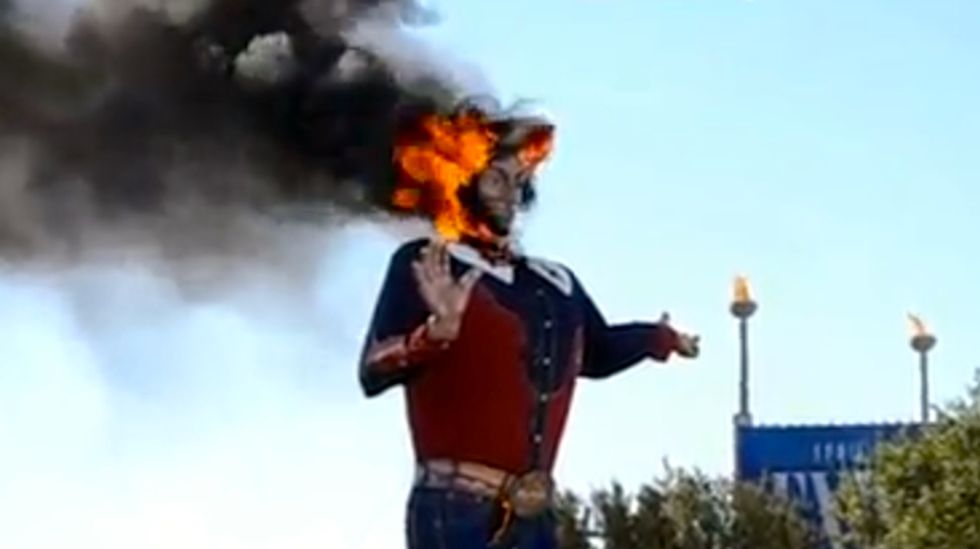 They could rebuild him. They had the technology and the capability to build the world's biggest mechanical talking Texan cowboy

After a fire last year destroyed one of the Lone Star State's most iconic images, the annual State Fair of Texas in Dallas opened this week with a brand new Big Tex, the towering figure who greets visitors with a friendly wave and a cheerful "Howdy, folks!"

This being a state that likes to go large, the opportunity was seized to make the new Tex even bigger than the old: at 55ft he is three feet taller and with a 95-gallon hat rather than the previous incarnation's 75-gallon headwear. And at 19,000 pounds heavier, as he is now free-standing. His clothes are redesigned and his boots are decorated with graphics including the American and Texas flags and the state capitol. His darker complexion has led some to dub him "Big Tex-Mex" amid rumours that it was a conscious decision to acknowledge Texas's growing Hispanic population.

Most importantly, he is made of fire-resistant material. The official symbol of the State Fair since 1952, the original Big Tex expired at the age of 60 in a tragic accident last fall. Big Tex rapidly went up in flames in the closing days of last year's fair after an electrical fire started in his right boot. He could not be saved, and his lifeless body was hauled away, with many onlookers reportedly in tears.

A mournful Dallas Morning News editorial said that for visitors, a trip to the fair without seeing Big Tex would be "like visiting New York without the Statue of Liberty." Officials quickly vowed to construct a replacement within the year.

After being installed, New Tex was hidden by curtains, though local news helicopters buzzed overhead, hoping to catch a sneak peak. He was expected to be unveiled on Friday, the fair's opening day, but a forecast of high winds caused officials to reveal him a day earlier. He cost $500,000, according to local news reports.

The fair runs until 20 October. Other attractions include fairground rides and creative arts competitions. It describes itself as the "fried food capital of Texas", with offerings including a Fried Thanksgiving Dinner and a deep-fried chocolate chip burrito.