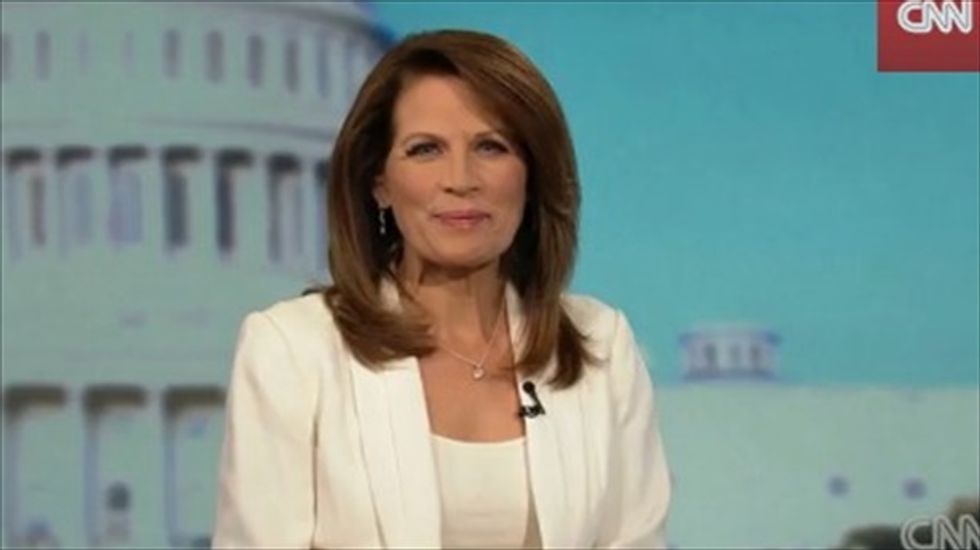 "It will be very unpleasant if the death panels go into effect — that's the IPAB board," Bachmann told Situation Room host Wolf Blitzer. "If we have denial of care for women, children, senior citizens. Or if we have problems where people aren't given the drugs that they need — maybe they'll be denied drugs for breast cancer. You bet this can happen. That is what i'm worried about. People all across the united states. This is literally an issue of life and death."

The term, coined by former Alaska Gov. Sarah Palin (R) in 2009, was quickly reported as the "lie of the year" by PolitiFact. But it was Bachmann who provided the basis for the term earlier that year when she read an article by conservative writer Betsey McGaughey on the House floor.

Bachmann also made repeated references to an unidentified meeting she said she attended Friday morning which she argued substantiated her worst fears about the new law.

"Millions and millions of Americans are losing health insurance right now," Bachmann argued, even though the state health exchanges mandated by the law will not take effet until Oct. 1. "They're being thrown off their employer-paid health insurance."

"But they'll be eligible to go to the exchanges and buy insurance," Blitzer countered.

"Not necessarily," she responded, without accounting for the fact that insurance will be mandatory once the ACA, commonly called "Obamacare," is fully implemented.

Later in the interview, Blitzer asked Bachmann if she is "happy" that taxpayers would have to pay for healthcare costs for people who decide not to buy insurance.

"You know who shows up," Blitzer pressed after Bachmann said her oldest son is a physician. "These are people who don't have health insurance, and we take care of them."

"Quite often it's illegal aliens," Bachmann responded. "Illegal aliens show up, so we the American taxpayer are picking up the tab for people who aren't American citizens."

Watch the interview, aired on CNN on Friday, below.