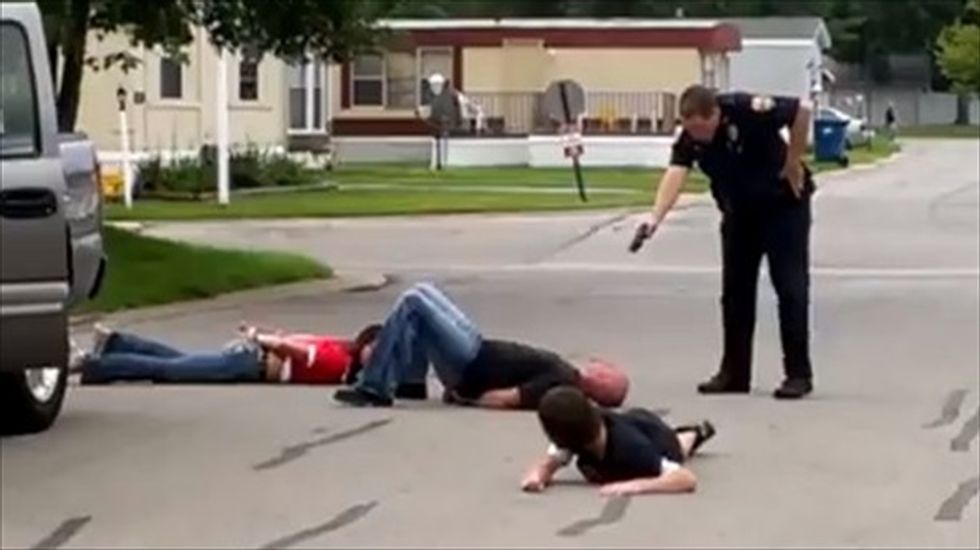 Police in Washington Township, Ohio are investigating an officer's conduct after footage surfaced online of him waving his Tazer at two people already handcuffed on the ground and seemingly grabbing a teenage boy during a traffic stop.

The Toledo Blade reported on Wednesday that Officer Eric Hart was on paid leave while his department investigates his encounter on Sunday with Aaron Tatkowski, his daughter-in-law Cassandra Meyers, and Meyers' 14-year-old son.

"He's not in trouble, but to keep things above board, we put him on administrative leave until an internal investigation is fully complete," Police Chief Christopher Kaiser told the Blade. "I'm not saying he did anything wrong, but we're trying to show we're not trying to sweep this under the rug or cover it up."

The video of the traffic stop, filmed by a witness, opens with Hart pointing his Tazer at Tatkowski while arguing with him and Meyers. At one moment, Hart points toward the camera and asks, "Are these guys witnesses down here?"

According to the Blade, Hart stated in his report of the incident that he stopped Meyers for having what he called an "altered license plate." Tatkowski arrived at the scene and reportedly got out of his truck cursed at Hart while accusing him of "harassing people for no reason." The description for the video contends that Hart blocked Tatkowski's driveway while stopping Meyers, and that the confrontation began after Tatkowski asked Hart to move his vehicle.

Tatkowski told WTOL-TV on Monday that he complied with Hart's instructions to get back in his truck, but was pulled out and thrown on the ground and handcuffed, along with Meyers, her son and his girlfriend.

"Somebody get the real police on the phone," Tatkowski yells in the video, to which another witness, Jim Stechschulte, responds that he is calling police in nearby Toledo for assistance. Stechschulte can be heard saying, "We've got an officer in distress" to dispatchers.

Hart can also be seen in the video grabbing Meyers' son by the arm and telling him, "When a police officer asks you to do something, that's what you listen to." Later in the video, Hart approaches Stechschulte telling him to get off the phone.

"This is not the city of Toledo, and they're already on their way," Hart tells Stechschulte, before taking his phone and throwing it on the ground.

The Blade reported that Tatkowski pleaded not guilty on Monday to charges of misconduct at an emergency, obstructing official business, and resisting arrest. He was released from Lucas County Jail on his own recognizance. Meyers was was released from jail on Monday after pleading not guilty to charges of obstructing official business, tampering with evidence, fictitious plates, and a tax payment warrant.

Watch video of the traffic stop, posted by YouTube user "Christine Lipper" on Sunday, below.