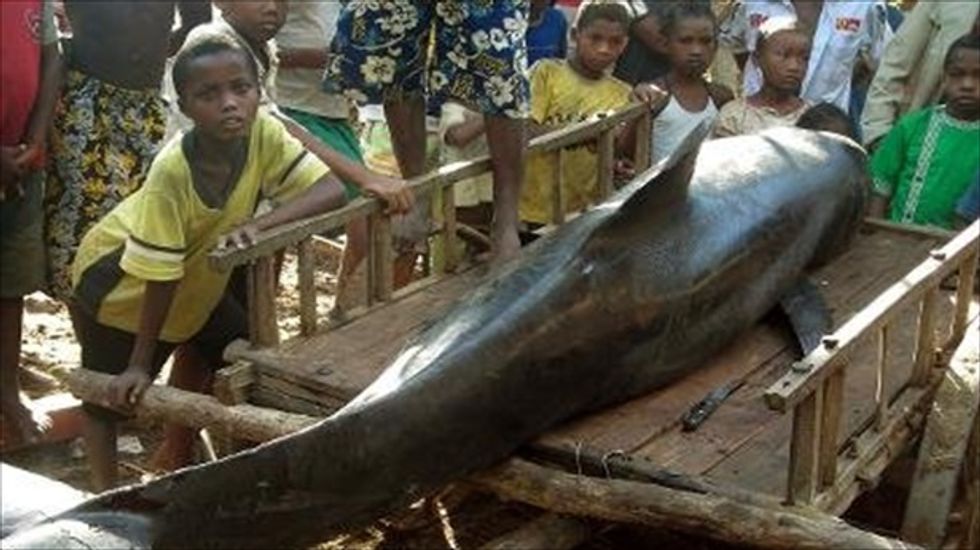 A noisy technology that blasts sounds below water to map the ocean for oil is being blamed for 100 melon headed whale deaths off Madagascar, experts said Thursday.

An independent panel of scientists found that sonar surveying by ExxonMobil in late May 2008 led to the sudden displacement of the whales, which became stranded and died.

"Earlier such events may have been undetected because detailed inquiries were not conducted."

The researchers described a "highly unusual event" in which about 100 melon headed whales became stranded in shallow waters in the Loza Lagoon system in northwest Madagascar in May and June 2008.

"This typically open ocean cetacean species had never previously nor since been reported in this shallow tidal estuarine system, nor in any other in Madagascar," said the study.

The culprit was named as a "high power 12 kHz multi beam echosounder system (MBES)" operated by an Exxon Mobil vessel on May 29 about 65 kilometers (40 miles) offshore from the first known stranding.

The five-member independent scientific review panel said the vessel's operation was "the most plausible and likely behavioral trigger for the animals initially entering the lagoon system."

The sounds would have been "clearly audible over many hundreds of square kilometers of melon headed whale deep water habitat areas."

The advocacy group Oceana said the findings show how dangerous the technology can be to aquatic animals.

"Seismic blasts can disturb the vital behaviors of dolphins and whales such as breathing, feeding, mating and communicating," said the group's vice president for US Oceans, Jacqueline Savitz.

"This can quickly turn deadly when animals are startled into rushing to the surface or are driven into shallower areas, where they often die as these whales did."

A spokesman said ExxonMobil said it does not back the panel's findings.

"ExxonMobil believes the panel?s finding about the multi-beam echo sounder is unjustified due to the lack of certainty of information and observations recorded during the response efforts in 2008."