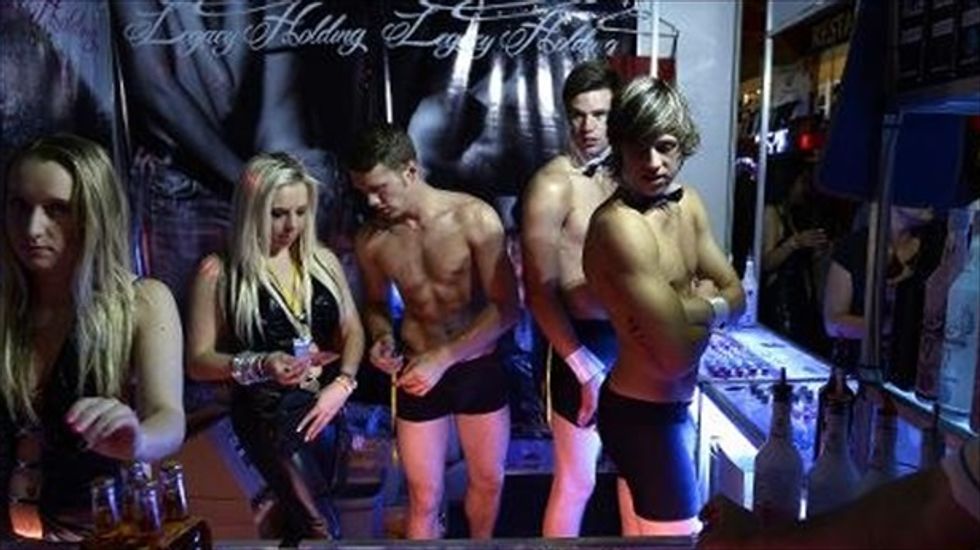 Vendors sell spirits on Sept. 27, 2013 at the Sexpo sexuality and lifestyle show in Johannesburg. [AFP]

It's an adult-only fair that promises to cater for every fantasy, but South Africa's annual "sexpo" drew an unusual exhibitor on Friday: the Salvation Army.

Tucked between sex-toy stands and skimpily dressed hostesses, the Christian group famed for its charity work said it was there on a mission to raise awareness about sex trafficking.

"We are not here to judge anybody, that's not our job as Christians," said spokeswoman Major Carin Holmes.

"We want to make people aware that there could be danger to this trade."

Holmes said they were encouraged by the reception they had received from visitors to the Johannesburg expo.

She said over 500 people had signed their petition opposing the traffic of women into the sex trade.

"This is a great platform to spread our message. People need to know that sex is not always sexy."

The church group's cubicle featured posters of naked girls with bruises on their bodies.

The Sexpo sexuality and lifestyle show is currently in its sixth year.

"Me and my wife have been attending this event since 2009... we always look forward to it," said 65-year-old Fred Smythe.

"It's exciting and there is nothing unlawful or forbidden about it," he added with a smile.

But it was the penile artist Pricasso who appeared to attract the largest crowds on Friday.

The middle-aged artist, only clad in a pink high hat and a matching bow tie, used his penis as a paint brush to conjure up impeccable portraits before an appreciative but gobsmacked audience.

According to the Sexpo franchise owner, Arthur Calamaras, the show "has grown greatly" over the years.

"Most of the visitors are women, they even come in groups, that means they love what they see here," he said.

"Part of the show is to educate people about sensuality, to make them aware of their bodies."

He shrugged off criticism that the show was undermining women in a country with one of the highest rates of sexual violence.

"People will always have pre-judgements ... everything here is decent, nothing is done to demean anybody. We are not about that," he said.