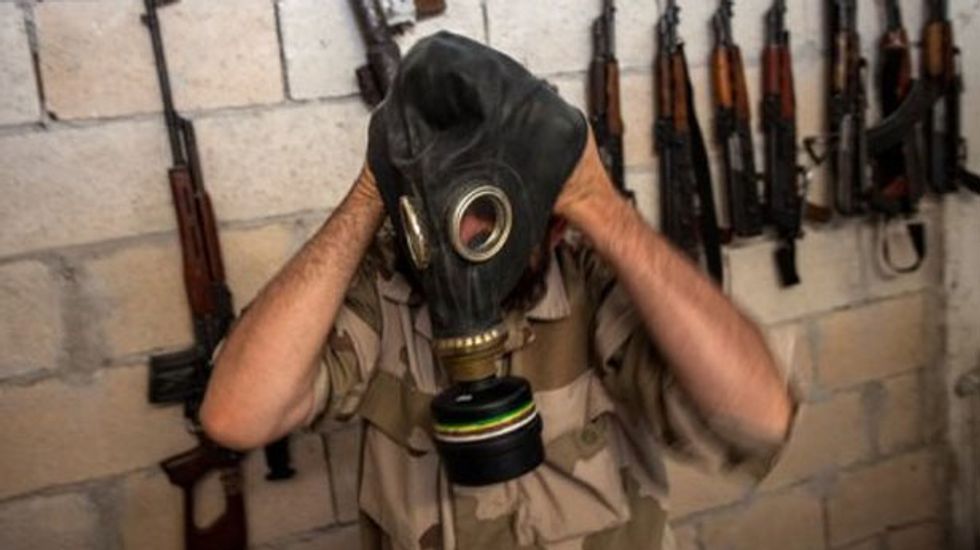 The major powers overcame a prolonged deadlock to approve the first council resolution on the conflict, which is now 30 months old with more than 100,000 dead.

UN leader Ban Ki-moon, who called the resolution "the first hopeful news on Syria in a long time," said he hopes to convene a peace conference in mid-November.

Resolution 2118, the result of bruising negotiations between the United States and Russia, gives international binding force to a plan drawn up by the two to eliminate President Bashar al-Assad's chemical arms.

The plan calls for Syria's estimated 1,000 tonnes of chemical weapons to be put under international control by mid-2014.

International experts are expected to start work in Syria to meet the tight deadline next week. Britain and China offered to finance the disarmament operation.

"Should the regime fail to act, there will be consequences," US Secretary of State John Kerry warned the 15-member council after the vote sealing a US-Russian agreement.

But Kerry hailed the resolution.

"The Security Council has shown that when we put aside politics for the common good, we are still capable of doing big things," he said.

Human Rights Watch however was not impressed with the deal.

"This resolution fails to ensure justice for the gassing of hundreds of children and many other grave crimes," said the watchdog's UN director, Philippe Bolopion.

Efforts to destroy Syria's chemical weapons "do not address the reality that conventional weapons have killed the overwhelming majority of the estimated 100,000 people who have died in the conflict," Bolopion said.

"If the killing of civilians by conventional weapons continues unabated, the chemical weapons resolution will be remembered as an effort to draw red lines, not save civilian lives," he said.

Bolopion renewed HRW's call for the UN to "refer the situation in Syria to the International Criminal Court (ICC), and adopt targeted sanctions against those responsible for mass killings."

Russia, Assad's main ally, has rejected any suggestion of sanctions or military force against Assad. It has already used its veto power as a permanent Security Council member to block three Western-drafted resolutions on Syria.

There are no immediate sanctions over a chemical weapons attack, but the resolution allows for a new vote on possible measures if the Russia-US plan is breached.

Russian Foreign Minister Sergei Lavrov said that the council would take "actions which are commensurate with the violations, which will have to be proven 100 percent."

The resolution also applies to the Syrian opposition, Lavrov said.

The resolution "condemns in the strongest terms any use of chemical weapons in the Syrian Arab Republic, in particular the attack on August 21, 2013, in violation of international law."

Washington has blamed Assad's government for that sarin gas assault on the Damascus suburb of Ghouta that US officials say killed more than 1,400 dead, and threatened a military strike over the attack.

Syria attacks must be 'accountable'

Should Syria not comply with the resolution, the Security Council agreed to "impose measures under Chapter VII of the United Nations Charter."

The charter can authorize the use of sanctions or military force, but new action would require a new vote, said Russia which would likely oppose any use of force against its ally.

Russia also rebuffed calls by Britain and France for the Ghouta attack to be referred to the International Criminal Court.

The resolution expressed "strong conviction" that those responsible for chemical weapons attacks in Syria "should be held accountable."

It formally endorsed a decision taken hours earlier in The Hague by the Organization for the Prohibition of Chemical Weapons (OPCW) to accept the Russia-US disarmament plan.

Ban said the resolution "will ensure that the elimination of the Syrian chemical weapons program happens as soon as possible and with the utmost transparency and accountability."

Ban also told the Security Council he wanted to hold a new Syria peace conference in mid-November, and said that the foreign ministers from Britain, China, France, Russia and the United States agreed to make sure that each side negotiate in "good faith."

A first peace conference was held in June 2012 but splits in the Syrian opposition and the international community have thwarted a follow-up.

Ban will start contacts with his Syria peace envoy Lakhdar Brahimi next week on setting the firm date and who will attend the new meeting, diplomats said.

He also noted that the resolution was not "a license to kill" with conventional arms.

The Security Council resolution gave backing to the 2012 conference declaration, which stated that there should be a transitional government in Syria with full executive powers.

It also determined that the new peace conference would be to decide how to implement the accord.

British Foreign Secretary William Hague said after the resolution was adopted that the international community must step up efforts to help those caught up in a humanitarian crisis.

"This decision should pave the way to the elimination of chemical weapons in Syria, and set a standard for the international community in responding to threats posed by weapons of mass destruction," Ashton said.

The EU would provide "forceful" support in the case of non-compliance, Ashton said in a statement.