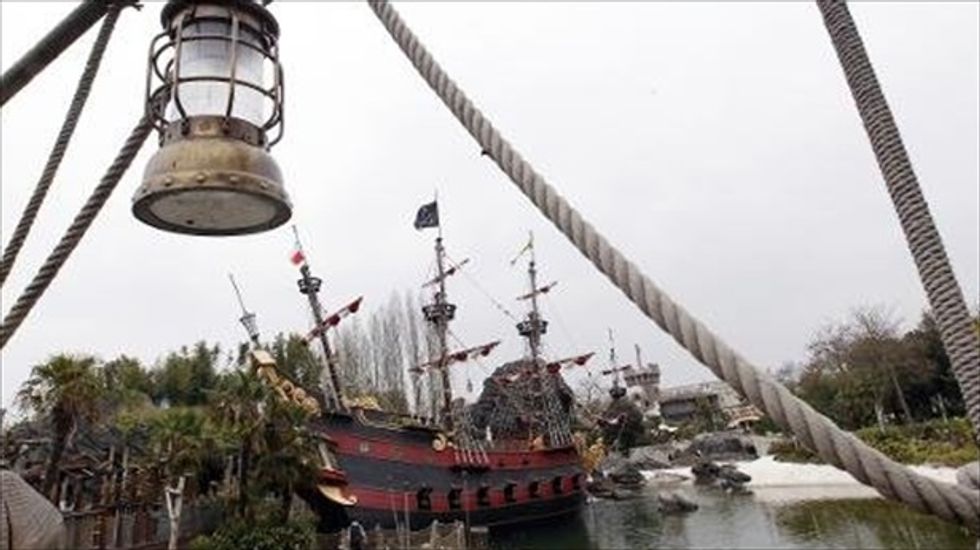 A view of the Pirates Bay at the Disneyland park in Chessy, near Marne-la-Vallee, outside Paris, taken on March 31, 2012. [AFP]

A five-year-old boy was in critical condition Wednesday after falling off a boat in Disneyland Paris's "Pirates of the Caribbean" ride, police and management said.

Anne Chazareix, the police officer in charge of the probe into the accident, said the boy, "accompanied by his father, lost his balance when the boat was arriving at the end of the ride" in the amusement park near Paris.

He "fell and found himself stuck under the boat" in the water, she added, before his father and others pulled him out.

The accident happened on Wednesday afternoon, at a time of high affluence during school holidays, and the boy was rushed to hospital.

Chazareix said he was in critical condition but did not seem to have "visible injuries".

The ride -- which is also a feature of other Disneylands around the world -- allows visitors to glide on boats through various pirate scenes that include fighting and shipwrecks.

It is hugely popular and inspired the eponymous blockbuster films that star Johnny Depp.

Contacted by AFP, the Euro Disney group that owns and operates the park confirmed the accident but was unable to give exact details about the child's condition.

"Our first aid services quickly intervened," a spokeswoman for the group said.

"The ride is temporarily closed and we are at the side of the family."

Disneyland Paris is a hugely popular amusement park for tourists and locals. It attracted 16 million visitors last year, surpassing the Eiffel Tower and the Louvre museum.

But this is not the first time that accidents have happened at the park.

In April 2011, five people were injured -- and one seriously -- in a wagon of the Big Thunder Mountain Railroad, a rollercoaster.

The same train derailed in October of the same year, forcing the evacuation of some 30 people.

Three years earlier, overcome with panic, a man hurt his head after jumping off a ride when he was high above the ground.